Haas: Overall it was a pretty good day 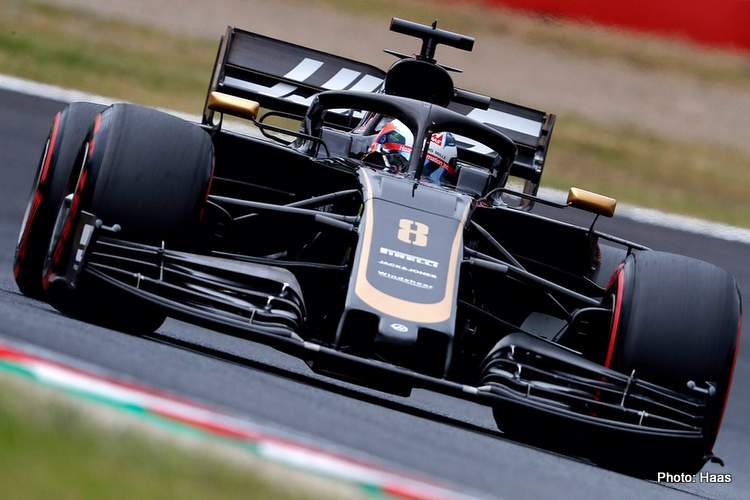 The 17th round of the 2019 FIA Formula One World Championship began with practice Friday at the Suzuka Circuit as teams prepared for Sunday’s Japanese Grand Prix.

Both Haas F1 Drivers ran the Pirelli P Zero Red soft tires exclusively in FP1. Grosjean’s best lap of 1:31.283 came on his second set of the soft compound placing him 11th overall on the timesheet. Magnussen similarly cycled through two sets of the soft rubber, setting the 15th fastest lap of the session with a 1:31.785 tour.

Grosjean and Magnussen enjoyed extra sets of tires at their disposal in FP2 given the cancellation of Saturday’s third and final practice session. There was added pressure on the session however knowing FP2’s final classification will be used to set the grid order in the event that Sunday morning’s qualifying session has to be cancelled.

Utilizing three new sets of softs each, Grosjean banked a 1:29.553 lap to secure 13th overall, with Magnussen clocking a 1:29.749 lap to place 16th on the timesheet. Both drivers ended the session with a high-fuel distance run starting off on used softs before switching onto new sets of the Yellow medium tires to run to the checkered.

Between the two sessions, Haas F1 Team ran a total of 106 laps – 53 each by Magnussen and Grosjean.

Romain Grosjean: “I actually think it was a super exciting Friday. I think it would be cool to have Saturdays like this, with FP1 in the morning and then FP2 in the afternoon, where you have extra tires and the result is your qualifying.

“You can work on the car, and at the same time push hard, I was trying different things. I thought it was quite a cool day. There’s obviously a little bit more pressure on that as free practice. This morning the car was good, but in the afternoon I was expecting a little bit more to be fair, I wanted to have three-four more tenths.

“We just didn’t have it, it’s a bit of a shame in that aspect. We’ll keep working and we’ll see if we actually do have qualifying on Sunday morning or not.”

Kevin Magnussen: “It was a bit of a strange one, considering we now have a cancelled day tomorrow. We had to go for it a little bit in FP2 in case that sets our starting position – who knows if Sunday morning will be ready for action.

“I hope we get another shot as we didn’t really get much out of it. It was interesting having more tires and using those in FP2, but we weren’t so quick, our pace wasn’t great. Let’s see what the weather does on Sunday and go from there.”

Guenther Steiner, Team Principal: “A very different FP1 and FP2 than normal, as obviously we won’t have FP3 and qualifying tomorrow. Overall it was a pretty good day, we didn’t have any issues. All we can do now is wait and see what the weather is doing, hopefully everyone stays safe. We’ll be back to continue this on Sunday.”

Qualifying is scheduled to start at 10:00 local time on Sunday, Oct. 13 due to the cancellation of all track events on Saturday, Oct. 12 – a result of the predicted impact of Typhoon Hagibis in the region. Should weather conditions preclude holding qualifying at that time, the grid for the 53-lap Japanese Grand Prix, set for 14:10 local time, will be established based on FP2 classification.