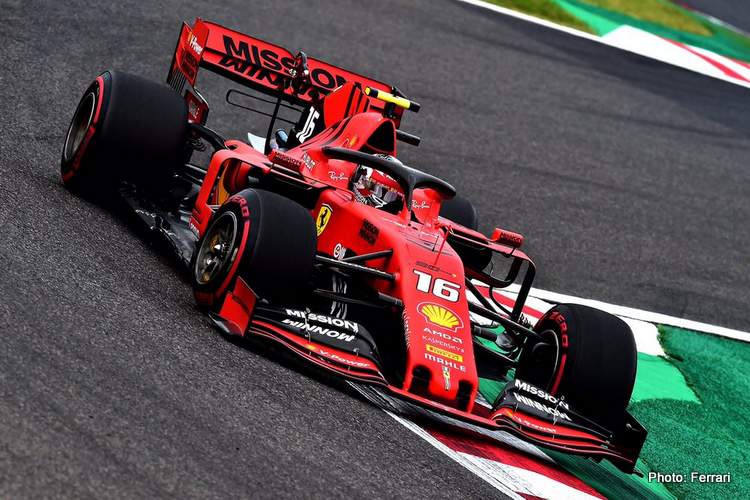 Ferrari report from the first day of free practice of the Japanese Grand Prix weekend, Round 17 of the 2019 Formula 1 World Championship, at Suzuka Circuit.

It was a busier Friday than usual here today.

Scuderia Ferrari Mission Winnow, along with the nine other teams had to make the most of today’s track time, given that the circuit will be closed tomorrow and free practice 3 is cancelled while qualifying is postponed to Sunday morning at 10.

All this is because of the imminent arrival of typhoon Hagibis which is meant to hit the Mie Prefecture overnight and last throughout Saturday. By Sunday, sunny and dry conditions are expected.

FP1. The first session ran pretty much as normal, with work focussing on set-up and tyre evaluation. Sebastian Vettel completed 26 laps and Charles Leclerc did 20. The German’s best time was a 1’29”720 while the Monegasque did a 1’29”912.

Programme change. Before the second session, the organisers announced the change to the timetable for Saturday and Sunday. It meant that the 90 minute afternoon session took on greater importance than usual because, if for any reason, it was not possible to run qualifying on Sunday morning, then the FP2 timesheet would decide the starting grid.

FP2. Therefore it was an intense afternoon, with two attempts at a quick lap, one at the start and one towards the end when the track was more rubbered-in. In between those runs, the team worked towards the race with long runs to analyse the Medium and Soft compounds.

Back on Sunday. Right now, the paddock is busying itself with ensuring that all equipment is safely stowed and dismantling much of the infrastructure that could be in the path of Hagibis. Tomorrow, the track will be shut down, with only personnel essential to the maintenance of critical systems allowed to be on site. The new timetable means qualifying will now take place on Sunday at 10 (3.00 CET) and the race starts as planned at 14.10 local (7.10 CET).

Charles Leclerc: “We made the most of our day. Knowing that qualifying has been postponed to Sunday due to the weather conditions, everyone approached free to practice a bit differently to usual, especially for the second session. There will be no FP3 this weekend and if we can’t drive on Sunday morning for any reason, the results from FP2 will count for the starting grid.

“Our competitors were very strong today and we are not yet where we would like to be. I am not entirely sure where we are lacking in terms of our pace, but I know that some of the improvements will come from me working on my driving.

“Sunday will be busy, but in the end you always have the same routine before you get into the car, the same mindset. So we will go ahead as usual, working hard on improving in all areas and doing the best job possible to bring home a strong result.”

Sebastian Vettel: “Today, was not too bad, at least it was better than it looked. We are in reasonable shape, but maybe we are lacking a bit of pace overall. Our rivals looked very comfortable right from the start of practice and they confirmed that pace in FP2.

“I think we have a bit of room for improvement as it wasn’t an ideal session, in terms of how we made use of our tyres. I’m not sure what I’ll do tomorrow: relax and maybe do some indoor sports. On Sunday there will be a big question mark over the state of the track as tomorrow’s wind and rain will have an affect.”