Haas: We never know on any weekend where we’ll end up 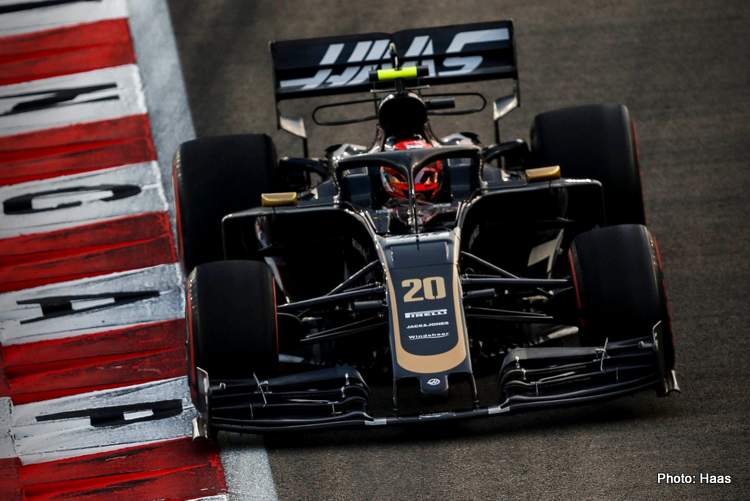 Haas F1 Team enters the upcoming Japanese Grand Prix at Suzuka Circuit buoyed by the form it displayed in the preceding Russian Grand Prix at Sochi Autodrom where both Romain Grosjean and Kevin Magnussen showed pace throughout the entire race weekend.

Grosjean advanced all the way to the third and final qualifying round to start eighth while Magnussen rallied from his 13th-place starting spot to finish ninth, earning Haas F1 Team’s first points-paying result since the July 28 German Grand Prix.

Grosjean likely would’ve joined his teammate in the points at Sochi had he not been taken out in an opening-lap crash, as the veteran Formula One driver was consistently among the top-10 in practice and qualifying.

The two points Magnussen earned in the Russian Grand Prix boosted Haas F1 Team’s season tally to 28 points, which maintained the squad’s ninth-place standing in the constructors’ championship where it holds a 27-point advantage over 10th-place Williams and is just seven points behind eighth-place Alfa Romeo.

Both Grosjean and Magnussen look to carry the momentum from Sochi into Suzuka, a track held in extremely high regard by each pilot. Grosjean calls the 5.807-kilometer (3.608-mile), 18-turn Suzuka Circuit his “most favorite track in the world” and Magnussen terms it “a driver’s track”.

It remains Magnussen’s best finish in four career Formula One starts at Suzuka and it was one of Grosjean’s four top-10 efforts at the track, a history highlighted by his performance in the 2013 Japanese Grand Prix where he led 26 laps before finishing third behind the dominant Red Bulls of Sebastian Vettel and Mark Webber.

Perhaps the reason Grosjean and Magnussen enjoy Suzuka so much is that they can push their racecars to the absolute limit without being stuck to the track via maximum downforce. The layout of Suzuka is a figure-eight, and it is the only track in Formula One with such a configuration.

A bridge overtop the straight that links turns nine (Degner 2) and 10 is a signature of the track, with drivers nearing 330 kph (205 mph) as they go across the bridge through turn 15, better known as 130R, so named because of its 130-meter radius.

The first sector of the track caters to a car’s aerodynamics while the second sector rewards horsepower.

With Haas F1 Team’s diligence and perseverance having been rewarded in Sochi, the American team’s rise in fortune can continue in the land of the rising sun.

You had a good weekend in Sochi where both Grosjean and Magnussen had pace throughout practice, qualifying and the race. Even though the outcome wasn’t ideal, as Grosjean was caught up in a lap-one crash and Magnussen received a penalty that dropped him from eighth to ninth, Haas F1 Team still came away with points. Can the momentum and key learnings from Sochi be applied at Suzuka?
GS: “Even having had a good race in Sochi, it doesn’t mean that this form will carry on. For sure, we’ll try to carry it on, but the car is very temperamental, to say the least, and we never know on any given weekend where we’ll end up. You’re always learning when you’re racing. Hopefully, we can carry that form into Suzuka and beyond.”

How helpful was the team’s speed in Sochi for company morale, where the effort that’s been put forth throughout the summer finally paid some dividends?
GS: “Points always help. It helps to keep people going. It gives you confidence that you can still do it. Points and good results are always the easiest way to keep morale up in a team.”

Many drivers – Grosjean and Magnussen in particular – claim Suzuka as their favorite track. When drivers come into a venue with confidence and a sense of being, does it allow them to attack more and perhaps provide more detailed feedback?
GS: “I think they always try to get the best out anyway, but Suzuka is a fantastic racetrack and it’s a challenge. I think on tracks like that, the motivation is just higher for them to do well. There’s enjoyment, too. I fully believe going around Suzuka fast is a very cool feeling. They can’t wait to get there and that always motivates them to do well.”

Only five races remain on this year’s schedule. Has the season moved quickly for you or has it seemed to move a bit slower than in year’s past because of the amount of adversity you’ve had to work through with how the Haas VF-19s have performed on the track?
GS: “It’s been up and down this season. When you get a good result, you can’t wait to go to the next race, but when you have a few bad results in a row, you fear to go to the next race. Sometimes it goes very quick, and sometimes it goes very slow. When you’re having a bad race, those two hours seem like they’re dragging on for days. Overall, this year’s been very challenging for us. It’s gone by in the blink of an eye – we’ve only five races to go. It’s almost unbelievable.”

When you leave Japan you’ll be gearing up for your home race – the United States Grand Prix at Circuit of the Americas (COTA) in Austin, Texas. Where do you want Haas F1 Team to be at that time and what will your thoughts be on that long flight back to North Carolina?
GS: “Austin’s great. It’s always nice to go to your home race. Everyone on the team loves being there, in Austin itself. How we treat it from a racing point – it’s the same. You always give it 100 percent and a little bit more. From that side, not a lot changes. The support has increased because people have got to know us a little more. We’re quite established in Formula One, even though this is only our fourth year. We have Haas Hill there at COTA – that’s an established event now. I think it’s getting bigger and bigger, which is fantastic.”

Even though your race result in Sochi was suboptimal, you had a good weekend with pace throughout practice and qualifying. Can the momentum and key learnings from Sochi be applied at Suzuka?
RG: “Yes, I think so. I mean, we will keep working hard, keep trying to improve the car, learn as much as we can, and do the best job that we can. Suzuka is a great circuit and we’ve always been quite competitive there. I’m hoping it’ll be the same again this year.”

How helpful was the team’s speed in Sochi for company morale, where the effort that’s been put forth throughout the summer finally paid some dividends?
RG: “It was great that we were competitive all weekend. The car felt good from FP1, which usually gives you a clear representation. Obviously, it was then painful to watch the race from hospitality, but it was really good to see that Kevin was managing to keep some fast cars behind with good pace. It was good.”

You’ve been quoted as saying that Suzuka is your most favorite track in the world. Why?
RG: “It’s probably in the nature of the circuit. It’s high speed – there’s no room for mistakes – which is becoming more and more rare nowadays with the new circuits. There’s elevation to go with that speed, and it’s just a different shape from all the other tracks being a figure-eight with the bridge and the tunnel.”

Beyond the racetrack, what is most often talked about at Suzuka is the passion its fans have. Can you describe the atmosphere at the track and the fervency Japanese fans have for Formula One?
RG: “Japanese fans absolutely love Formula One. It’s probably one of the only races on the calendar where you see the grandstands full from Thursday onward. Their passion for Formula One is huge, and they have a huge respect for it. It’s very special to see. You can tell it’s a big event when we go there.”

When you leave Japan you’ll be gearing up for Haas F1 Team’s home race – the United States Grand Prix in Austin, Texas. Where do you want Haas F1 Team to be heading into that event?
RG: “It’s going to be good. It’s always a race we’re looking forward to. Obviously, it’s a busy week in Austin with a lot to do, but it’s always a good weekend. Let’s hope the car is competitive there. We haven’t been very successful in Austin in recent years, but I’m hoping that this year it’s going to be better and that we can have a good race. We want to show the fans we can do the job.”

You had a good weekend in Sochi with pace throughout practice, qualifying and the race that resulted in a points-paying finish. Can the momentum and key learnings from Sochi be applied at Suzuka?
KM: “Yes, I think so. We had a good weekend in Sochi. We had good pace all the way through the weekend, which was nice. The car seemed to be in a good place and performing well. We managed to get a couple of points at the end – despite the penalty – so that was good.”

How helpful was the team’s speed in Sochi for company morale, where the effort that’s been put forth throughout the summer finally paid some dividends?
KM: “The work that the whole team has done since the beginning of the season has been really good. We started off the season in a pretty good way, but we lost our way a little bit and I think we’ve had a tough streak of races. Now, it seems we’re slowly getting back on our feet. That’s great to see and a testament to the great work the team has done.”

You’ve been quoted as saying that Suzuka is one of your most favorite tracks in the world. Why?
KM: “Suzuka is great because it’s just such a high-speed, flowing track. Formula One cars are great at high speed with the downforce we have. Any track that we go to that has high-speed corners, it’s always pretty good fun. We might have a good shot at some more points there. Our car’s usually good at high-speed circuits. Let’s see how it goes.”

Beyond the racetrack, what is most often talked about at Suzuka is the passion its fans have. Can you describe the atmosphere at the track and the fervency Japanese fans have for Formula One?
KM: “I love the fervency that the Japanese fans have and I’m looking forward to seeing that come into play at the weekend. It’s something special for a driver to experience.”

When you leave Japan you’ll be gearing up for Haas F1 Team’s home race – the United States Grand Prix in Austin, Texas. Where do you want Haas F1 Team to be heading into that event?
KM: “The United States Grand Prix is a fantastic race. I really like America. I like spending time there. For a new track, it’s a great one. Usually newer tracks are pretty boring – there’s a tendency for that, for sure. I think Circuit of the Americas has done a great job. I think other tracks should take notice of what they do.”