Williams: We found an issue with the wheel nut retainer 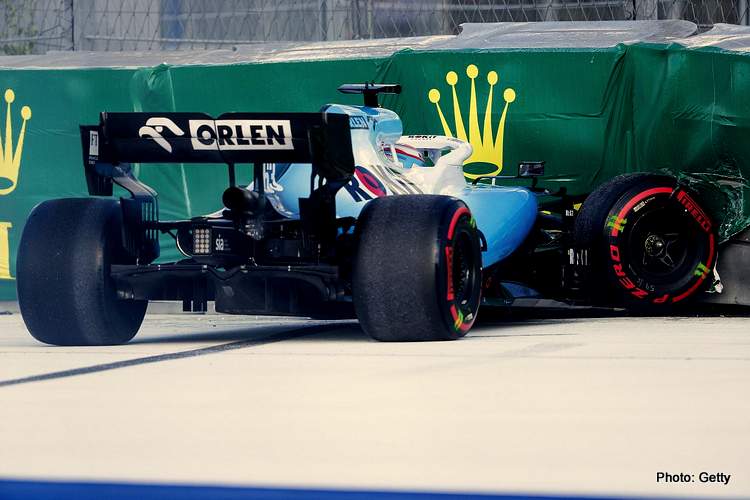 Williams have revealed that a faulty wheel retainer caused George Russell’s crash during a safety car period at the Russian Grand Prix, the incident also prompted the team to retire Robert Kubica’s car.

Perennial backmarkers, the once-mighty team are anchored to the bottom of the Formula 1 field, well off the pace and a second or so slower than their closest rivals.

The team cited lack of spare parts for retiring Kubica, and clearly cannot afford to risk the car and Kubica in the immediate aftermath of the Russell incident. The Singapore and Sochi doubleheader has taken its toll on the Grove outfit’s spares bin.

On Thursday, the team’s senior race engineer, Dave Robson confirmed: “We found an issue with the wheel nut retainer on George’s car, which led to the front-right wheel not sitting perfectly. This caused a lock-up under braking. The design is very mature and well-proven. The remaining inventory will be inspected thoroughly, and we do not anticipate a repeat of the issue.

“Unfortunately, we were forced to retire Robert’s car due to the amount of accident damage we sustained in the Singapore-Russia back-to-back races in order to protect ourselves from going into the next events. The team has worked extremely hard to ensure race quantities have improved ahead of Japan and the final races.”

After the race on Sunday, Russell reported, “The car was feeling good, and then all of sudden after the pitstop there was an issue and the next thing I knew, I was in the barrier. It was a shame for the race to end like that as we were showing some strong pace.”

Kubica added, “After George’s DNF, the team decided to stop my car, to take care of the parts that we have on the car. We are not in an easy situation and Japan is around the corner.”