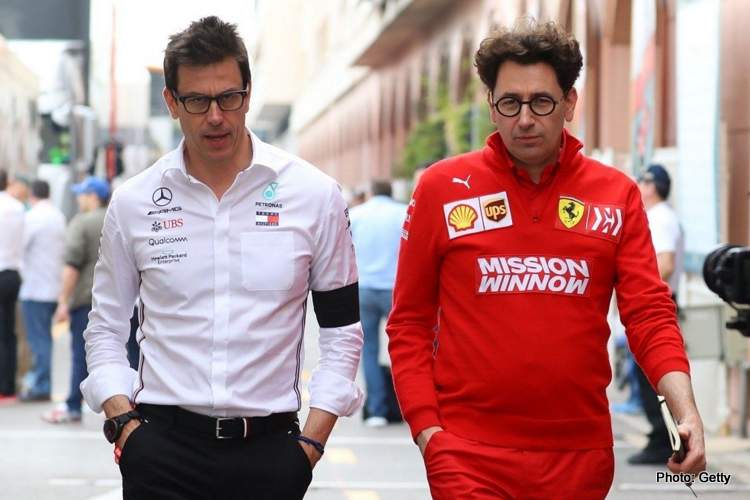 Wolff stopped short of joining those who are wondering if Ferrari might be pushing the boundaries of legality with its power unit.

Asked about the performance gap, Wolff told L’Equipe, “It’s an aberration because, with stable regulations, it is unusual to see such discrepancies.

“Ferrari crushes everyone in a straight-line right now. It’s very difficult to make up that deficit on the rest of the circuit. It’s a situation we need to overcome.

“F1 has become an engine discipline, and we need to understand how to improve our performance, find the right power-to-drag ratio, and to better understand the tires. ”

To do that, he revealed: “We must look at every aspect of the engine. Are there innovations we have missed? I think this is undoubtedly the case.

“There is a certain gap that is almost impossible to catch up now, so we have to ensure we put a great chassis on the track, understand the tyres and choose the right race strategy.

“It is in these areas that our opportunities lie but, clearly, given the performance of their engine, we do not expect to dominate the next races,” added Wolff.

With regards to upgrades for Suzuka, he confirmed, “Yes, we are working on them now. We are trying to allocate resources, on the one hand, to continue to fight this season, and on the other preparing for the next one.”

Wolff said the upgrade will not be big as Ferrari’s in Singapore, “We’re talking about small improvements,” he said. You can expect that we will continue to make progress, but it will be at a slower rate compared to the summer.”

Whether by design or not, Mercedes can afford to take the foot off the gas as both this year’s titles are just about theirs. It is a mere formality that they claim a dozen titles in six years, with their ace driver Lewis Hamilton set for a sixth world title and his fifth for the German team.

Big Question: Where have Ferrari found the power?