Red Bull: The maximum achievable for us 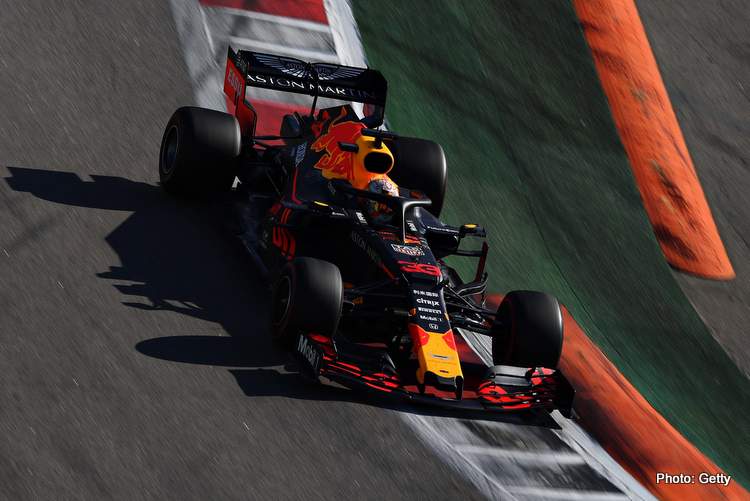 Max Verstappen climbed from ninth place to fourth at the flag, while Alex Albon stormed through the field to claim a brilliant fifth place after starting from the pit lane as the Bulls staged an incredible race recovery from grid penalties at the Russian Grand Prix.

With the Team electing to take PU-related penalties ahead of the weekend in order to put both drivers in the best position for the final five races of the season, the race at the Sochi Autodrom was always going to be tough, with Max starting in ninth place and Alex relegated to a pit lane start after a qualifying crash led to repairs under Parc Fermé conditions. However, both Bulls delivered outstanding drives to claim 22 valuable championship points at the end of a tricky weekend.

At the start of the race Ferrari’s Sebastian Vettel made a superb start and was past second-on-the-grid Lewis Hamilton before they reached the turn one kink. Vettel then got a massive tow from pole-sitting teammate Charles Leclerc and stole the lead through turn two.

Max jumped up to P8 at the start from ninth place on the grid but behind him there was a collision involving Haas’ Romain Grosjean, Alfa Romeo’s Antonio Giovinazzi and Renault’s Daniel Ricciardo. The incident resulted in Grosjean exiting the race, while both Ricciardo and Giovinazzi required pit stops for repairs.

The collision brought out the safety car and under the caution Vettel led from Leclerc with Hamilton third ahead of Sainz. Max was still in eighth place while Alex had risen to P16.

When the safety car left the track Vettel held his advantage over his teammate, a situation that appeared to cause some friction, as Leclerc had apparently expected the German to allow him to retake the lead after affording Vettel a tow after the start. The chatter over the radio would continue for some laps until Leclerc was told that the pass would take place later in the race after the pair had built a sufficiently large gap to Hamilton in third.

Max and Alex, meanwhile, were making moves forward. On lap eight Max powered past Racing Point’s Sergio Pérez through turn four to steal seventh place. Four laps later he launched a brave but brilliant move on McLaren’s Lando Norris in to turn one to take sixth place and then, on lap 17, he powered past the second McLaren of Carlos Sainz under DRS into turn one to claim P5.

Alex meanwhile quickly cleared Williams’ George Russell after the safety car and then inherited P14 when Alfa Romeo’s Kimi Räikkönen was handed a drive-through penalty for a jump start. He inherited another place when Renault’s Nico Hulkenberg suffered a slow second pit stop due to a front jack issue and then forced his way past Toro Rosso’s Daniil Kvyat to rise to P12.

At the front, Leclerc was the first of the leading pack to pit, with the Monegasque driver stopping for medium tyres on lap 22. He rejoined in fourth place behind Bottas and then began to set fastest laps.

Despite complaining of fading rear tyres Vettel stayed out until lap 26 and when he finally dived into the pits to take on medium tyres the lead changed hands as promised, with Leclerc flying past to take the lead.

Vettel’s time in action after his stop was brief. By the time he reached turn 15 of his first lap out from the pits his Ferrari had given up and an engine issue saw him pull over at the side of the track.

That brought out the Virtual Safety Car and then when Williams’ George Russell crashed out under the caution, the physical safety car was deployed.

Under the caution a host of cars pitted, including Max (for medium tyres) and Alex (for softs).

And when the order shook out, Mercedes had profited hugely, with Hamilton in P1 ahead of Bottas. Leclerc was now down in third with Max in fourth place. Alex meanwhile was into the points after all the stops, in 10th place.

When the racing resumed, the leading drivers held their positions but further back Alex made a brilliant re-start to pass the Racing Points of Lance Stroll and Segrio Perez and the McLaren of Lando Norris to claim P7.

Alex then began to hunt down Haas’ Kevin Magnussen and at the end of lap 42 he launched a late-braking attack into turn 13 that worked perfectly. With P6 claimed he next set off after Sainz who was on the medium tyre.

And the Thai racer capped a brilliant afternoon with an equally brilliant move past Sainz at the start of lap 49. He pulled alongside the Spaniard on the sweep through turn three and then powered past on the entry to the next corner to seal fifth place.

That was how the order remained until the chequered flag. Leclerc pushed hard to get past Bottas, but the Finn stoically resisted the pressure and after 53 laps Hamilton crossed the line to take his ninth win of the season and the bonus point for posting the fastest lap two tours from home. Bottas was second ahead of Leclerc and the Bulls wrapped up a brilliant fight through the field to seal fourth and fifth place.

Behind Alex, Sainz took sixth place for McLaren ahead of Pérez. Norris added to a positive result for McLaren with eighth place, while Magnussen managed to hold on to P9 despite incurring a five-second penalty for leaving the track and gaining an advantage earlier in the race. The final point on offer went to Renault’s Nico Hulkenberg.

“I think P4 was the best possible result today and we had a little bit of luck with Seb retiring, but I’m satisfied with the points we scored considering the penalties and pace of Ferrari and Mercedes. There wasn’t too much going on for me once I cleared the mid-field traffic and from there I had a bit of a lonely race until the Safety Car closed us all up. We were clearly a bit slower than the top three today but at the end of the race it was also more difficult being on the medium compound tyre when the others were on the soft. For sure we maximised the result but of course we want to be scoring more podiums and victories so we still have work to do as the others are very strong. Now I’m looking forward to Suzuka and we want to do the best we can for all the Japanese fans at Honda’s home race.”

“It was a good race and I think P5 is the best we could have done. I wanted to bounce back and get a good result after yesterday’s crash so I’m really happy with how the race went, although we probably got a bit lucky with the Safety Car. Morale was obviously a little bit low on Saturday night and it was a lot of work for the Team so this result is for them. Starting from the pit lane was never going to be easy but the pace was quite strong on the softs and it was a good haul of points. I started out of position and had some fun coming back through the field, but I don’t want all of my races to be like that. I like boring races too so I’m hoping for a cleaner and smoother weekend in Japan. In the first stint I was struggling to get past Daniil and Pierre and it took me a long time. The downforce loss is immense when you’re following in a train of cars which I think is because the track is designed a bit like a street circuit. Up to the race it had been a tough weekend but I’m getting more comfortable. I just need to get up to speed and in a rhythm earlier on in the weekend, but that will come with more laps and time in the car. With the exception of Abu Dhabi, all of the remaining tracks will be new for me so Suzuka will be difficult, but I like new tracks.“

Christian Horner, Team Principal: “It was a good performance from both of our drivers today. For Max, P4 was the maximum on the table having started from P9 and he made some great moves early in the race to move up the order. His pace at the end of the race was respectable but not quite enough to challenge the top three.

Meanwhile, Alex, who started from the pit lane, performed well to make his way through the field, making some great overtakes in what was another mature drive. To finish up in P5 was an impressive race from him and fourth and fifth was probably the maximum achievable for us today. We now look forward to the Japanese Grand Prix, Honda’s home race.”