Haas: The whole team worked hard for these points 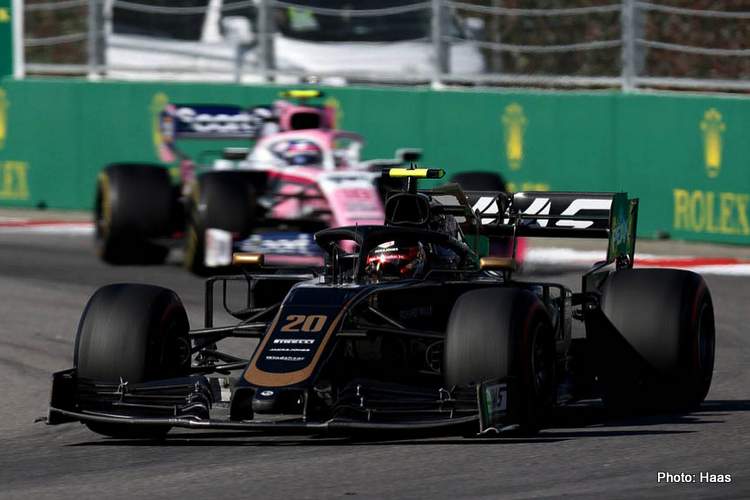 It was the 16th round of 2019 FIA Formula One World Championship. Both Haas F1 drivers started today’s 53-lap race around the 5.848-kilometer (3.634-mile), 18-turn circuit on Pirelli P Zero Red soft tires, Magnussen from 13th on a new set and Grosjean from eighth on a set used during Saturday’s Q2 session.

Magnussen had a fantastic getaway, moving from his 13th grid position to 10th. Grosjean’s day, however, came to an abrupt end on the opening lap when he was punted off the track and spun into the turn-four barrier by Alfa Romeo driver Antonio Giovinazzi, who crept between Grosjean and Renault’s Daniel Ricciardo to make it a three-wide situation navigating the tight, right-hand turn. The damage to Grosjean’s Haas VF-19 was terminal and caused his seventh DNF of the season.

Meanwhile, Magnussen held firm in 10th place throughout the early stages of his opening tire stint, briefly grabbing ninth on a lap-four restart when he got by Nico Hulkenberg but then losing the position back to the Renault driver two laps later.

Magnussen continued to hold position and, as the field began its opening round of pit stops, crept as high as fifth when he pitted on lap 28 for a set of Yellow medium tires during a virtual safety car for a pair of single-car incidents involving Sebastian Vettel of Scuderia Ferrari and George Russell of Williams Racing.

Magnussen resumed in sixth when the race went back to green on lap 33 and held off Alexander Albon for the next nine laps before the Red Bull Racing driver took advantage of DRS and soft tires to slip past.

Two laps later, Sergio Perez got by to take seventh when Magnussen drifted wide at turn two. A five-second time penalty was issued to Magnussen, now running eighth, for an improper return to the racetrack.

The checkered flag flew with Magnussen crossing the line eighth, some four seconds ahead of McLaren driver Lando Norris, but the time penalty dropped the Haas F1 driver to ninth. It was Magnussen’s fourth points finish of the season and the team’s seventh.

With today’s results, Haas F1 Team remained ninth in the constructor’s championship with 28 points, seven behind eighth-place Alfa Romeo and 27 ahead of 10th-place Williams.

Lewis Hamilton scored the victory in the Russian Grand Prix by 3.829 seconds over his Mercedes teammate Valtteri Bottas with polesitter Charles Leclerc of Scuderia Ferrari taking the final podium spot another 1.383 seconds back. It was Hamilton’s 82nd career Formula One victory, his ninth of the season and his fourth at Sochi.

Romain Grosjean, DNF: “There’s not much to say, the footage is pretty clear. We’ve been working very hard all weekend, and we had a competitive car – we were going to go for points today. There was a huge amount of pressure on us to get into Q3 in qualifying yesterday, we don’t know how often we’ll get those chances. Obviously, our race was then ruined by turn four.

“I had no chance to react. It’s a bit of a disappointing afternoon. It’s hard to digest as I felt this was the weekend we could score. To be taken out on the first lap is very hard.”

Kevin Magnussen, 9th: “I think it’s been a positive weekend in terms of our pace. In qualifying yesterday, it looked very good. I made a mistake unfortunately in Q2 and didn’t go through to Q3, the car had been perfect. Today we had good pace again.

“I made a good start, gained a few positions, had a good first stint followed by a decent second stint, then I lost a few spots at the end and got a stupid penalty. That’s how it is I guess. I had lost the position to Perez, lost a load of time, I had dirt on my tires, I’d already lost enough time.

Guenther Steiner, Team Principal: “Unfortunately, Romain (Grosjean) was caught up in a crash on the first lap which ended his day, but obviously no penalties were given there, it’s all good. Kevin (Magnussen), at the end lost a position, then he was given a five-second penalty – which I think was completely inappropriate.

“Anyway, we got two points for ninth place, that’s better than nothing. Kevin fought very strongly at the end and the whole team worked hard for these points.”