Sochi FP3: Leclerc makes the difference as Ferrari show off 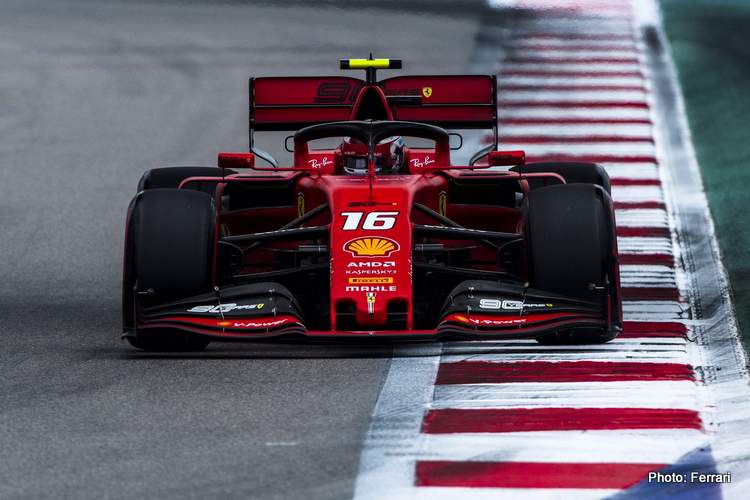 Charles Leclerc ended the third and final free practice session of the Russian Grand Prix weekend fastest of all, as Ferrari gave a glimpse of their impressive hand ahead of qualifying.

The Reds clearly have the pace, and Leclerc maximised what he had with a best lap of 1:32.733 which was an impressive three-tenths of a second up on teammate Sebastian Vettel.

Mercedes appeared to give what they had but a four-tenths deficit in the high-power first sector was hard to make up for the W10 which preferred the tighter third sector.

Lewis Hamilton’s best shot was four-tenths shy of the top time and good enough for third on the timing screens, with Valtteri Bottas in fourth a couple of tenths down on his teammate.

Red Bull’s Max Verstappen was fifth fastest albeit a massive 1.4 seconds off the benchmark time, the Blues having something of a torrid weekend in Russia as they face a host of penalties that compromise their race already.

Adding to their woes was the fact that late in the session the Dutchman launched over a kerb in Turn 2, and then spun-out in the final sector and tapped the barrier. The real Red Bull pace remains hidden for now.

Alex Albon was a couple of tenths down on his teammate, he was seventh.

Ahead of him, in sixth, was Romain Grosjean who found some strong pace this weekend in the finicky Haas, with Kevin Magnussen tenth in the sister car.

Nico Hulkenberg was quickest of the Renault powered brigade, the German eighth on the timesheets, a tenth ahead of McLaren’s Lando Norris in ninth.

Daniil Kvyat’s home race is turning into a nightmare of sorts as the local hero was sidelined for a large chunk of Friday, and in FP3 he only did four timed laps before he was pitted.

Toro Rosso confirmed later that a full PU change is required and the Kvyat would be sitting out qualifying.

Great effort from @Charles_Leclerc and #Seb5👏

Next up – It’s time to go flat out for the #Quali session 💪 #essereFerrari 🔴 #RussianGP pic.twitter.com/UqeKidmNYb 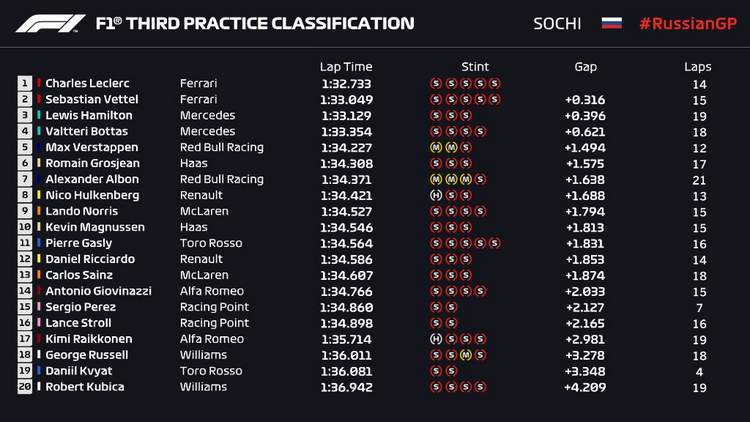