Toro Rosso: Happy with how we ended the day 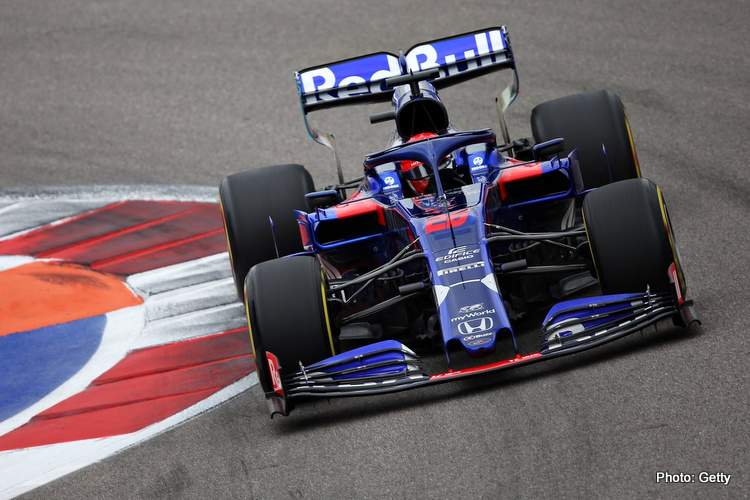 Toro Rosso report from day one of the Russian Grand Prix weekend, Round 16 of the 2019 Formula 1 World Championship, at Sochi Autodrome.

“It was a really good Friday. I’m happy with the progress we made between FP1 and FP2 as it seems to have gone in the right direction. We finished the day with the sixth-fastest time, which is always positive, but I think looking at our situation with the penalty on Sunday, we really need to make sure we have a strong race car and prioritize our car for Sunday compared to Saturday. There’s a lot to analyse tonight, but it was a positive day overall.”

“It wasn’t an ideal start to the day in FP1, so in FP2 we had to catch up with the mileage we lost and try a few things we couldn’t try in FP1. I needed to get reacquainted with the track and find my references again, which I did, and we ended up having a productive session in FP2. We covered everything we planned to do, so we are prepared for tomorrow. In the end, we completed a decent number of laps for our long run analysis and hopefully we have enough data to understand what we need for the race. There are always chances, so we’ll do our best to take them. We knew our weekend was going to be compromised already with the penalty we are taking. However, we will do our job and see how far we can get up the grid on Sunday.”

Jonathan Eddolls, Chief Race Engineer: “I think it’s fair to say we are generally happy following the end of FP2, although we didn’t make it easy for ourselves today. We are introducing fresh PUs on both cars, which means a five-place grid penalty for Pierre and a back of the grid start for Dany.

“Unfortunately, we had a fuel system issue on Dany’s car after the first lap in FP1, which put him on the back foot in his home race. On the other side of the garage, we got some good mileage from Pierre’s car in FP1.

“The C4 compound has been brought to this track and we were expecting to exhibit some of the handling characteristics we know are a limitation on this car, so we came here with a big plan of mechanical and aerodynamic test items.

“Given Dany wasn’t able to run, all of that work shifted to Pierre’s programme, so that session was more about data gathering and trying to build up an understanding of how these items were behaving. Then, we put a lot of analysis in from FP1 to FP2 to try and take the best of everything and apply that to the two cars for FP2 onward.

“I think it’s shown the changes appear to be working because the competitiveness is looking reasonable, which is good, and the lower track temperatures also helped, as that seems to suit our package. The shorter run performance looked decent, and this is quite important for Pierre, as with the 5-position penalty it’s still important for him to do the best for Qualifying tomorrow.

“For Dany, it’s a different situation and our focus was primarily on the long runs, which looked quite positive too. We need to see what the wear figures are like to make sure the pace is fair, but I think the car balance was good and we’re quite happy with how we ended the day.”