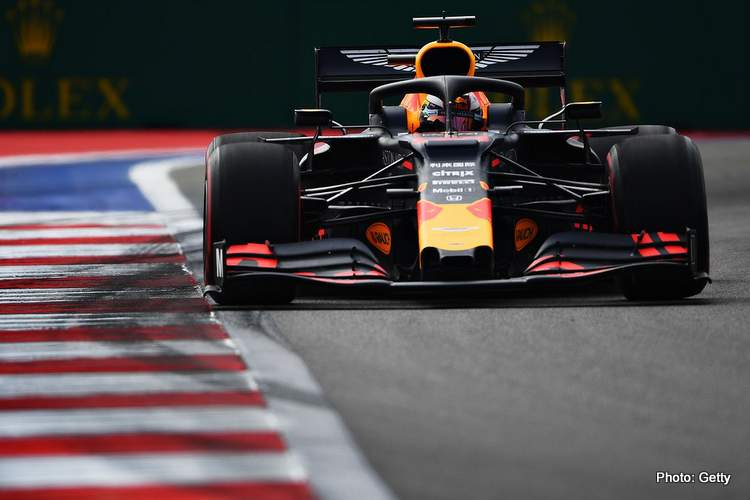 The Dutchman’s best effort of 1:33.182 was good enough for top spot by three-tenths of a second from Ferrari’s Charles Leclerc. The pair also shared a similar pace during the race simulation runs.

It was an impressive marker by Verstappen whose rookie teammate Alex Albon spent a chunk of time in the pits with an issue. When he got out he never managed a decent lap and as a result, was two seconds slower than his teammate and down in tenth.

Valtteri Bottas was again quicker of the Mercedes duo, the Finn third fastest but six tenths down on the top time, with Lewis Hamilton a tenth adrift of the sister car in fourth place.

A second down on the top time, in fifth and seven-tenths down on his teammate, was Sebastian Vettel in the Ferrari.

Toro Rosso’s Pierre Gasly was Best of the Rest in sixth, 1.8 seconds down on the top time, and a tad quicker than Sergio Perez in the Racing Point, seventh.

Lance Stroll was a tenth and a bit down on his teammate, good enough for ninth, with Renault’s Nico Hulkenberg splitting the Pinks in eighth.

With rain looming tomorrow, teams focussed on race pace during the session with the proverbial ‘powder being kept dry’ for qualifying when it really matters. Times are likely to drop substantially should Sochi remain.

Conclusions at the end of the day would be that Ferrari and Verstappen are pretty even on race pace with Mercedes yet to find the ‘On’ switch.

Behind the Big Three – nearly two seconds adrift – it is desperately close with only a second separating Gasly in sixth and Alfa Romeo’s Antonio Giovinazzi down in 18th!

Worth noting is the fall-and-fall-and-fall of Williams with young George Russell 3.623 seconds down on the prime time and teammate Robert Kubica another second slower – the hapless pair anchored to the bottom of the timesheets. 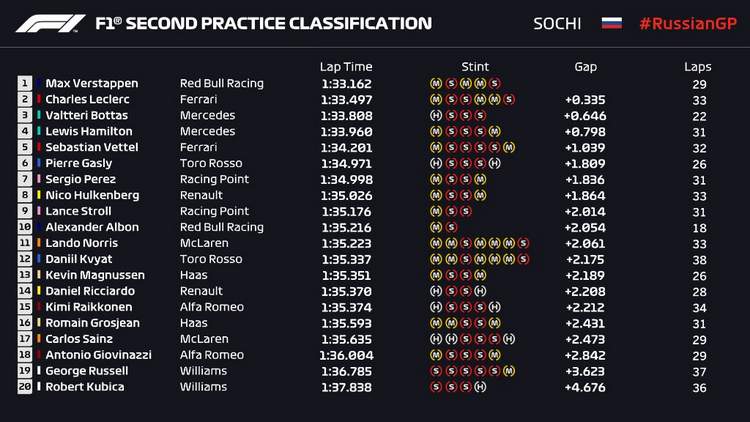