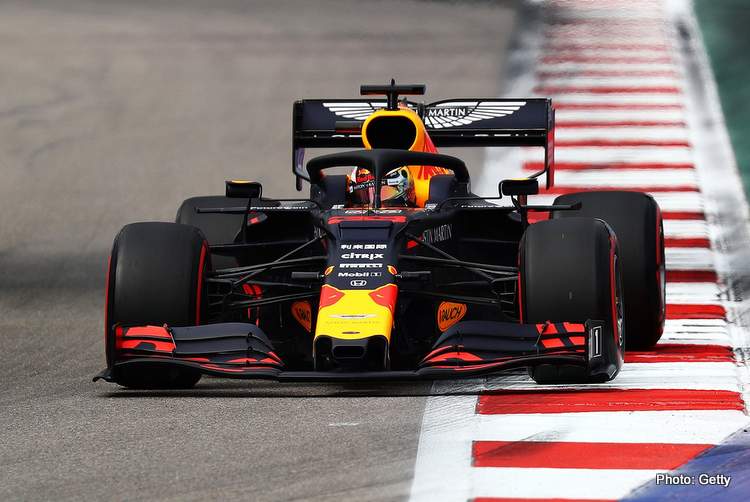 An update from free practice at the Russian Grand Prix as Max Verstappen and Alex Albon get up and running at the Sochi Autodrome.

As the Russian GP got up an running in Sochi, it hasn’t been our happiest hunting ground on the F1 calendar. In fact, it’s our bogey track, with absolutely nothing in the trophy column after five years of trying very hard. Our best starting position is fifth, which matches our best finish of fifth.

Last year’s race for us was, at least, spectacular, with Max making his way up from 19th on the grid to fifth. That gives us real cause for optimism this time around.

The track action at Russia’s Black Sea coast got underway on Friday morning with Free Practice One. Max completed 25 laps with a best time of 1:34.544 which saw him finish P2. Alex came back in P6 posting a 1:35.484 from his 22 laps.

The afternoon’s session, Free Practice Two, saw Max top the timesheet with a 1:33.162, from his 29 laps. However, Alex had reduced running due to the Team changing his floor following floor damage. The Thai driver finished the session in P10 posting a best time of 1:35.216 after 18 laps.

“Today was very positive and the car worked really well on both tyres. We followed our own programme, tried quite a few things set-up wise and got a good balance, especially in the last sector but even the first sector with the long straight looked competitive. When you have a good feeling with the car it comes alive in the last sector which is really nice after the strange weekend we had in Singapore.

“It looks like it may rain tomorrow so that will also mix things up but hopefully the car will also work well in those conditions. We will of course try and do our best in qualifying as the five place grid penalty will be applied after the session, so it is still very important to be quick but at least you can overtake around here and if you are fast you can get to the front. It’s only Friday and too early to make any predictions as everyone will improve but it is a very positive start.”

“FP1 went well this morning but this afternoon in FP2, I got a bit of floor damage after running wide out of Turn 4 which meant we lost some running which was a shame. That delayed things and then when we got back out it was a never-ending traffic jam with everyone on long runs so I didn’t get any clean laps in.

“I tried to stay out of trouble as best I could and I heard Bottas was just behind me but I didn’t know Lewis was right behind him and so it was my mistake to get in his way. It was just one of those things, but I wouldn’t say it was a waste of a session as there’s definitely things I learned out there.

“It’s encouraging to see where Max is and to see the car is back to being competitive again. I think the car is quick and the pace is good. I just need to work on it my side and get a cleaner run tomorrow. I’m building confidence with the car and this takes time, but compared to Singapore, I think we’re looking good.”