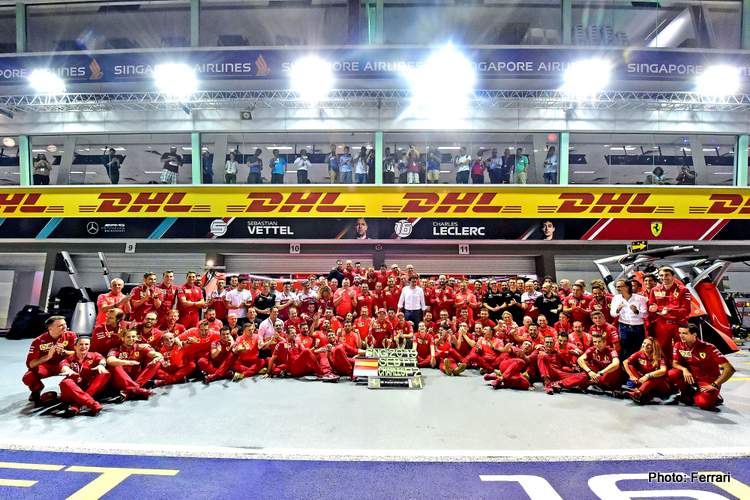 With Sebastian Vettel returning to the winners’ circle and a flurry of silly-season action, the past seven days saw plenty of action in the F1 world.

Singapore GP Aftermath: What a strange weekend. On Friday, it looked for all the world like Ferrari’s brief run at the top was over, with Mercedes and Red Bull back to the fore at a high-downforce track, yet come Saturday, the Reds had completely flipped the script and were just as strong as they’d been at Spa and Monza.

With that in mind, I’m having a hard time placing this race in its proper context. Did the Scuderia really just unlock the magic formula to their aero upgrades on Saturday? Or were Mercedes and Red Bull thrown completely off-course by their defective simulations? Or maybe it’s a combination of both? Right now, it’s very hard to tell, and that makes this weekend’s race in Sochi even more intriguing.

On a similar note, is this the turnaround Sebastian Vettel was looking for? He didn’t exactly outshine Charles Leclerc in taking the win at Marina Bay, but at the same time, confidence is a valuable commodity in this sport, and Vettel has been seemingly lacking it this season. Maybe that changes now – again, I guess we’ll find out in Sochi.

Haas Retain Grosjean and Magnussen: You may be able to make a decent case for Kevin Magnussen, but to see Haas re-sign Romain Grosjean for another season, particularly after incidents like this one is nothing short of an absolute shocker.

Either Guenther Steiner is the most forgiving man on the planet, or he needs to get checked for memory loss, because there is simply no way the Frenchman was the best option available. No, he’s not considered a slow driver, and he reportedly gives his engineers useful feedback, but how much does that count for when he keeps finding new ways to put his car in the wall? As Paul said last week, “if they were really serious they would have used this as an opportunity to really show their intent or at least maximise the obvious opportunities” and brought on someone like Alex Rossi or Nico Hulkenberg, to say nothing of the myriad other capable drivers.

Assuming Haas wants to actually challenge the likes of Renault and McLaren in 2020, it’s going to be awfully hard to do so with this lineup. In comparison, those teams each have two drivers with the quality to make it at the best teams on the grid, and you definitely can’t say that about Magnussen, let alone Grosjean.

Kubica Steps Out, Hulkenberg to Step In? Seemingly an inevitability given his sub-par performances this season, Robert Kubica made it known last Thursday that he was indeed leaving Williams at the end of the season.

One of those situations where you wonder if it was Kubica saying “you can’t fire me, I quit!”, there’s no getting around the disappointment of a former race-winning F1 driver coming back to the sport and looking like a shell of his former self, but it’s still a remarkable human story. No one would’ve blamed him if he’d been unable to return to any level of motorsport after his 2011 accident, so to make it back to the biggest stage of all is quite the testament to his resiliency. Here’s hoping he finds another series where he can thrive once more.

On the flip side, is this the lifeline Nico Hulkenberg needs? With the Haas door now shut, and Red Bull apparently not interested, it seems Williams is the only seat left on the grid for the German, although he’ll have to fend-off Nicholas Latifi and the gobs of cash he can provide. Unfortunately for Hulkenberg, with the current state of the nine-time former world champions, they might have to prioritise money over ability, and that means for the first time in a long time, he’ll be forced to look elsewhere.