Brawn Report: And surprise, surprise, it was Sebastian 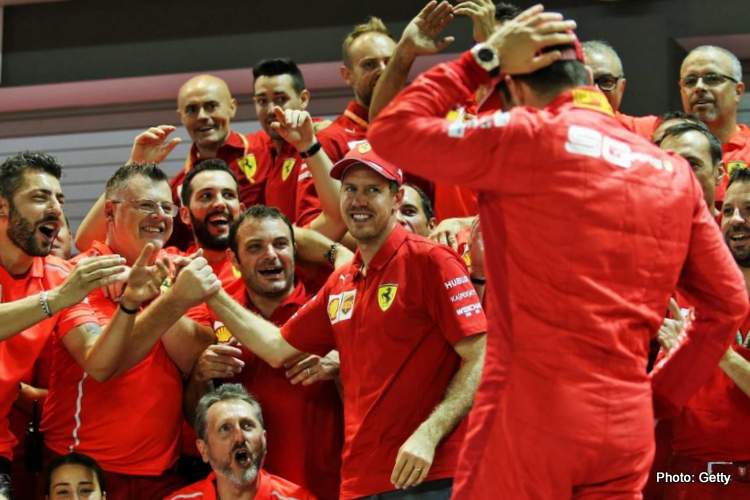 Formula 1 Managing Director, Motorsport Ross Brawn looks back on an intriguing Singapore Grand Prix in which Ferrari appear to have seized the balance of power in their tussle for supremacy with Mercedes.

The former Ferrari and Mercedes man provides his insight in the wake of a strange race with a most unexpected result. Brawn summed up:

“Twenty-three Grands Prix have gone by since we last saw Sebastian Vettel on the top step of the podium. The Ferrari driver has now won in Singapore five times, more than at any other track. More than this, the win also came at a track that was maybe the least suited to his Ferrari. But, in the end, in the sweltering Singapore night, he claimed a somewhat unexpected but well-deserved win.

“Ferrari were the strongest in terms of single-lap pace in qualifying, and the team then did a very good job in what was clearly a very tactical race, especially in the first stint.

“And surprise, surprise, it was Sebastian who made the most of the undercut, vaulting ahead of team-mate and early race leader Charles Leclerc and also Lewis Hamilton who had chosen to go as long as possible in his first stint.

“It was an important moment for the German who has been through a difficult period, especially in Monza when he was a member of the Ferrari team with little to smile about.

“It was also a morale booster for the entire team, starting with Mattia Binotto. Ferrari has clearly made progress with its car and the updates brought to Singapore had a marked effect on a circuit where downforce is key. The success of those updates bodes well for the team’s 2020 campaign as well.

“On top of that, the win was inevitably a weight off Vettel’s back. It will restore confidence and also relieve some of the pressure resulting from Leclerc’s phenomenal progress and any affect that has had on dynamics within the team.

“Though it may sound strange to say it, it was actually also important for Charles who was clearly unhappy with how the race played out. The Monegasque is hungry for wins, and so he should be, but in the long term even he will benefit from the fact the team will be much calmer now, with fewer distractions, and more able to concentrate on developing the car, which is a vital part of the preparation for next season.

“While Sunday’s Grand Prix perhaps failed to deliver the same tension as the late summer races – I’m thinking of the dramatic events in Budapest, Spa and Monza – it was, in my opinion, still a fascinating and intense race.

“It was clearly a different type of show, especially in terms of the fight among the top teams. The six drivers at the front of the pack might not have gone wheel-to-wheel but, assisted by their strategists, they instead played an intriguing game of chess.

“In races like these, the role of television commentators and commentators on social platforms are particularly important. Indeed, the latter are becoming more and more important in an era when the use of second screens to more closely follow a race is becoming prevalent.

“The way TV graphics can enrich the race experience for viewers is an area we are working on a lot, discussing on an almost daily basis with the broadcasters ways of improving the product they bring into people’s homes around the world.

“Also important is the role of journalists who analyse after the event, passing the information on to readers. One of the most fascinating aspects of Formula 1 is its ability to provide a show in so many different ways: a qualifying session fought out to the nearest thousandth of a second, a duel for victory that lasts all race and is won through strategic blows and counter punches between two teams made up of dozens of engineers. We all have to work together to get even more fans to fall in love with this sport, especially those described as ‘casual viewers’.

“For two thirds of the season it was the almost unanimous opinion that in simple terms of the top three teams, Ferrari was strong on tracks where the engine made the difference and it was also the perceived wisdom that Red Bull was in with a chance on tracks where aero was more important, while Mercedes had the more complete package and was better able to manage the tyres.

“However, after the race in Singapore we find ourselves commenting on a one-two finish for Ferrari and a podium without a Mercedes driver. Have we witnessed a revolution in the space of a fortnight? Definitely not, as the Silver Arrows are still the strongest at every race and their rivals have to do everything perfectly if they want to beat them.

“With no major rule changes next year, continuing with car development even when the championship fight is more or less decided, still makes more sense and can add value for 2020. So, for Ferrari, it was important to be competitive on a track like Singapore and in a certain sense, this will help Mercedes because it now knows it can’t relax for a moment if it wants to continue to dominate in the hybrid era.

“That battle, which also includes Red Bull will, make for an even more exciting end to the season, because the three teams will be fighting it out at each Grand Prix regardless of the impact on the Championships. Not just for reasons of competition or prestige but also to be in the best position for 2020.”