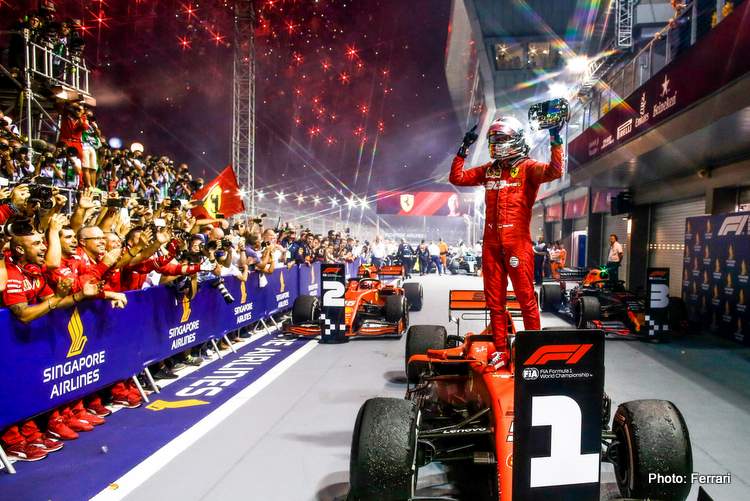 During all free practices, it didn’t look as if Ferrari would be the team to beat at the Singapore Grand Prix this past weekend.

It was Lewis Hamilton and Max Verstappen who called the shots. But then on Saturday afternoon, Ferrari stood up and set the record straight with pole position for Charles Leclerc and a third place on the grid for Sebastian Vettel.

Suddenly, the Italian team were the ones to beat In an eventful race, which had 3 safetycars, Ferrari played the strategy card perfectly and at the end of the day, they scored their first 1-2 finish of the season with Vettel as the winner and Leclerc in 2nd. Verstappen took 3rd. No Mercedes on the podium since the German Grand Prix earlier this year.

Did Red Bull get it wrong?

Starting the weekend, Singapore would be one of circuits on which RedBull would do great. During all 3 free practice sessions, Verstappen showed true pace and went head to head with Hamilton for top positions.

When it came down to qualifying, both drivers were missing something and got blind sighted by Ferrari.

During the race, pitstop strategy helped Verstappen to get into 3rd position and on a track known for difficult overtaking, he could hold on and finished 3rd. Alexander Albon had a solid race but couldn’t really hang on to the guys in front.

Being in a RedBull gave Albon a slight edge as he finished 6th. Afterwards, Helmut Marko told reporters that they were misled by what the simulator told them about what was possible.

That said, 3rd and 6th are still good points but they lost out on Ferrari, the team they want to beat in the constructors’ championship. Next up it’s Russia this weekend so the focus needs to be reset again.

“Finishing on the podium and gaining one place on a track where you can’t really overtake is positive.” @Max33Verstappen on the #SingaporeGP https://t.co/vAMU5iQmvL #F1 pic.twitter.com/dyPX0soLSl

A strategic misjudgement from Mercedes?

Mercedes were there or there about towards race day but on Sunday, all went south during the first pitstops. Usually, when cars in front pit, it is Hammertime so that they can overcut the ones in front but Mercedes stayed out too long and the window of opportunity closed.

Valtteri Bottas was the first of the 2 to pit and he came back behind both Ferrari’s and the RedBull of Verstappen. Hamilton was next to pit but it was clear that, if he pitted, he would come back behind Bottas. What happened next showed once again that Bottas is the number 2 driver at Mercedes as he was asked to go a bit slower for a few laps.

This made sure that Hamilton would get back on track between Verstappen and Bottas when Hamilton made his pitstop and so it happened. Afterwards, Hamilton was publically questioning the team’s strategy and was convinced that, if they hadn’t botched up the strategy, they would have easily have won the race.

I wonder if Bottas will get his moment when the tables get turned and he will get the better strategy. Not much time to dwell on that as the next race is this weekend.

Signing off from a difficult weekend for the Team in P4 and P5 https://t.co/LX8J4MrJtm #SingaporeGP pic.twitter.com/Ec0oBPY53y

Did Ferrari pull a rabbit out of a hat?

Towards race day, Ferrari wasn’t on the pace and it was set to be a SingaporeGP between Mercedes and RedBull but then came Saturday afternoon. Leclerc took pole position and Vettel took 3rd. It came as a surprise and many people, including myself, thought they put all their eggs in one basket for qualifying and that they would lose out during the race on race pace alone.

Nothing was further from the truth as the strategy played out perfectly for both Vettel and Leclerc. Leclerc started upfront and “slowed down” the pace, just enough so the tyres would last. Usually, the car in front gets the call on a pitstop but it was Vettel in 3rd who came in first.

As it turned out, it was the right call as when Leclerc came in for new tyres, he came back on track behind Vettel and together they went on to finish 1-2.

It was Vettel’s first victory since the 2018 BelgianGP and Ferrari’s first 1-2 finish of the season. Now let’s see if they can keep their latest momentum as we head down to Sochi this weekend.

If Carlos Sainz would not have run into trouble, I would’ve said him but now I’m going with two different drivers. First of all I want to point out Lando Norris, who drove a solid race. He had a good start, stayed out of trouble and executed the strategy with flying colours to finish 7th.

The second is Pierre Gasly. He had a rough time at Red Bull and was switched back to Toro Rosso but yesterday, he showed his racing skills as he defended and attacked fair but aggressive. By doing so, he earned himself 8th at the finish.

“It’s very good to come away from Singapore with more points than our competitors.”

“I enjoyed that race so much! Things didn’t really come all together with the timing of the first safety car, but the last part of the race was really exciting.” – @PierreGASLY

Who disappointed at Singapore?

We had Renault, who were pretty on it but lost out at the end, then we had Alfa Romeo who had some bad luck, Racing Point were very aggressive but maybe a bit too aggressive at times and also fell back but as with many races, it was the Haas team that just didn’t impress.

Kevin Magnussen is known for his hard defending and that was exactly what he had to do but he couldn’t hold on. Romain Grosjean had some bad luck at the start but also wasn’t all that impressive as he finished 11th with Magnussen last in 17th.

The team is still struggling to get the car in the perfect operating window and have massive issues with their tyres. Chances are they will try different set-ups on each car for the rest of the season, just trying to figure out what solution to get for their 2020 car.

Report and reaction from our #SingaporeGP

Any surprises during the SingaporeGP?

I have two. First of all, seeing Antonio Giovinazzi leading a race. That was a special sight and one for the family album as that hadn’t happened in a long long time. Secondly, and not on a good note. The DNF of George Russell meant that it was the first time this season that Williams didn’t get both cars at the finish.

On a side note, due to the safetycars, it meant that Robert Kubica got a lot of tv exposure as he was truly fighting for positions and I was very happy to see that.

With a safetycar rate of 100%, expectations were high so during the first half of the race, social media was pretty quiet and people started to wonder if or when the safetycar came out. It wasn’t after the first of three safetycar periods that the party got started.

The team order to Bottas was mentioned a lot, as did the situation with Leclerc when he found himself in 2nd behind Vettel after the pitstops. The overall thoughts on social media were very positive towards the SingaporeGP but a special mention has to go to Kubica.

He was talked about a lot after he found himself in a position where he could really fight for position. His Williams wasn’t good enough to hold on but it did give Kubica a beautiful showcase.

Next up it is the RussianGP this weekend and the timetable and a bit “extra” is already updated on the MsportXtra website.