The Day After: At Long Last 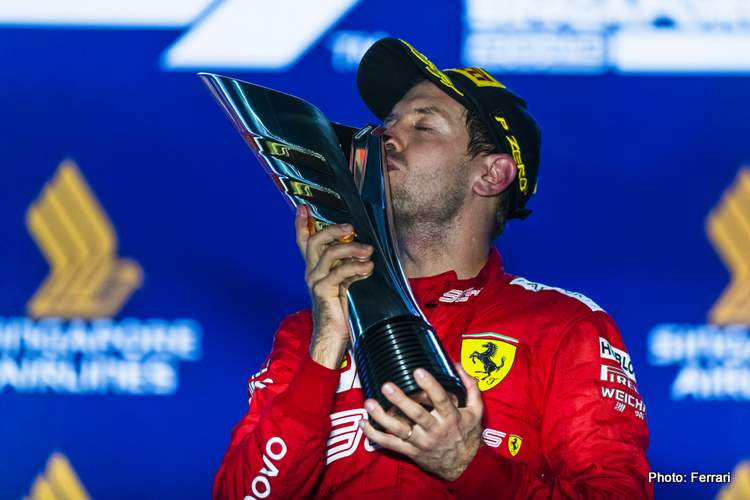 Over a year since Sebastian Vettel last stood on the top step of the podium, the German found himself back again after an interesting race in Singapore.

Not every F1 win can be considered equal. Some are more hard-fought, fortuitous, or simply impressive than others – that said, Sebastian Vettel understandably didn’t seem to care on Sunday.

Visibly emotional on the podium, this win at Marina Bay seemed to lift a tremendous weight from the German’s shoulders, saddled as he has been with the pressure and criticism of underperforming as Ferrari’s number one driver.

Sure, he was fortunate the pit wall was unable to call-in Charles Leclerc before him, but credit where it’s due, he delivered a faultless drive.

However, now the question will be whether this marks a turning point in his quest for supremacy with Leclerc, or if he will simply go back to being the same driver who was making costly mistakes as recently as Saturday.

On the other side of the garage, while Leclerc might not have got the win, his composure after having lost the lead through no fault of his own was very impressive to see. There was no tantrum, just a firm objection and then he moved on. Afterwards, he seemed as happy for Vettel as the rest of the team was, while making it known he was already looking forward to Sochi – here’s hoping the fight continues.

Disappointing to see Max Verstappen and Red Bull unable to really threaten the Ferraris. Blaming the simulator is an interesting twist, and according to Auto Motor und Sport, Mercedes made a similar mistake too. Wish I had that excuse for the mathematical mishap in my previous Day After.

Speaking of Mercedes, it was a bit harsh of them to reel-in Valtteri Bottas so he wouldn’t undercut Lewis Hamilton. Of course, having just signed his new contract, there’s no doubting the Finn knows exactly where he stands in the team.

Props to Antonio Giovinazzi, who gave Alfa Romeo its first race lead since 1983, and then held-on for his second-consecutive points finish, even with a 10-second penalty for driving too close to the recovery crane. Seems to be coming good at the right time.

Driver of the Day: Pierre Gasly

Maybe it’s because the pressure is off, maybe he’s just more comfortable in the Toro Rosso, but Gasly delivered another impressive drive on Sunday to go from P11 on the grid to P8 at the flag.

Worst of the Day: Mercedes

Not just for what they did to Valtteri Bottas, but for leaving Lewis Hamilton out as long as they did in the first place. A rare strategy misstep for the reigning world champions.