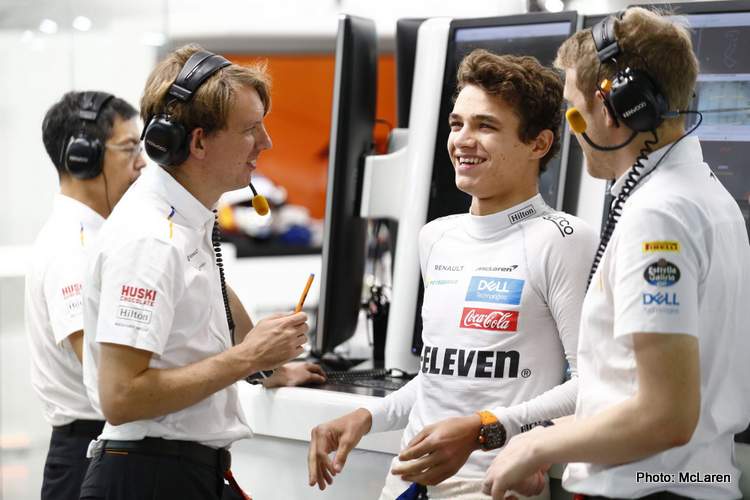 While millions watched and waiting for something to happen during a potentially explosive Singapore Grand Prix, McLaren rookie Lando Norris was more worried that he would crash because the pace on race night was so slow!

The first half of the race around the twisty and tricky Marina Bay Street Circuit was reduced to a stalemate as drivers simply followed one another around as slowly as possible, over ten seconds off the pace at one point, in a farcical effort to preserve tyres.

Speaking after shining under the floodlights with seventh place and Best-of-the-Rest, Norris told Sky F1, “I’m tired because the first 30-laps were so under the limit,  just driving around trying not to lock up or understeer. It was fairly relaxed but we must have been three or four seconds per lap off a normal pace.

“It was more like a 20-lap race. It was kind of nice because I’m not as tired as what I could have been, but it’s not racing. We’re just sitting there doing nothing. It’s boring, it doesn’t look good for anyone, but it’s just because the tyres are so bad.”

Clearly Norris has not read the ‘Things F1 Drivers Cannot Say’ manual but has candidly put it out there what everyone knows is wrong with the sport right now, namely: full dependence on Pirelli and their fake rubber combinations.

Nevertheless seventh in a race of high attrition, on Norris’ first visit to the venue was quite remarkable on a weekend in which McLaren’s improvements were patently evident. In Singapore, they were comfortably fourth in the pecking order, notably better than their engine supplier Renault.

Norris reported after the race, “A good race in the end with decent points, and I don’t think there was a lot more I could’ve done. We did the best we could at the start but I was just getting held up by everyone ahead, which is part of the race because everyone is trying to save tyres.

“There were Safety Cars, sometimes helping but other times hindering, as it allowed Hülkenberg and Gasly to come behind me on the softer tyre – a much fresher tyre as well – and I was under quite a bit of pressure towards the last few laps.

“I was having to push, which was fun, because for the rest of the race we were just driving around so slowly. It was a shame about Carlos getting hit by Hülkenberg at the beginning, because I think we could both have been in the points today. Massive thanks to the team and everyone back at the factory for their hard work,” added Norris.

Team boss Andreas Seidl was impressed with their 19-year-old ace, “Great drive from Lando to bring the car home in the best possible position we could achieve today. He coped well with immense pressure in the final laps, when the Safety Cars put guys with better tyres directly behind him.”

Big Question: Is Lando being too harsh on Pirelli?