Binotto: It was the right time to stop Sebastian – no discussion 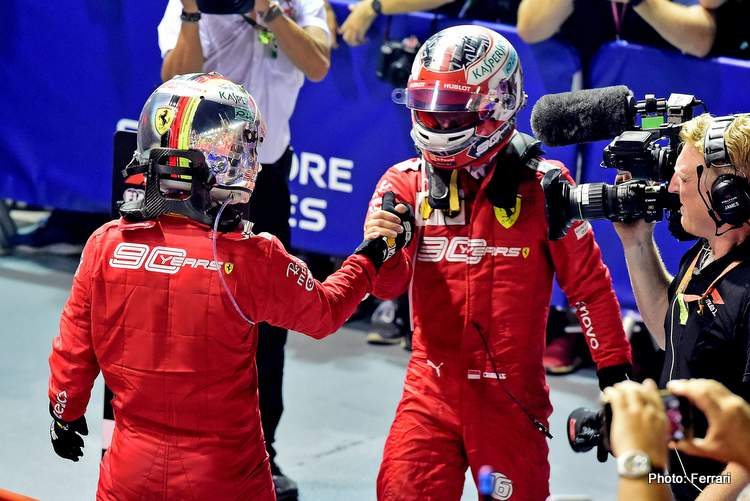 Ferrari defended their Singapore Grand Prix pitstop strategy on Sunday after it set up Sebastian Vettel to beat teammate Charles Leclerc, who had led from pole position, in a one-two finish.

The Monegasque had seemed in control and heading for a third straight win after back-to-back victories in Belgium and Italy, but Vettel pitted first and leapfrogged Leclerc in a tactic known as an undercut.

The victory was the German’s first in nearly 13 months and handed Ferrari their first one-two finish since the 2017 Hungarian Grand Prix.

Leclerc was vocal in expressing his displeasure over the team radio but team principal Mattia Binotto said stopping Vettel a lap earlier had been the right call in the bigger picture.

The move prevented Red Bull’s Max Verstappen and Mercedes driver Valtteri Bottas from using the undercut themselves to get ahead of Ferrari.

Binotto told reporters after the race. “Verstappen was ready to stop so we had to protect his [Sebastian’s] position. It was the best opportunity for us to try and overtake Hamilton. Later on, we would have stopped Charles and the pit crew should have been free for him.

“So that was the right time to stop Sebastian – no discussion. Going out he drove very well on new tyres and, simply, that’s racing and he has been ahead of Charles. We could not have stopped Charles at that stage because if you are leading the race you will not stop first. It was simply the proper window for Seb.

“I know that obviously Charles is annoyed and frustrated, which is a positive attitude. If you would be a driver that’s the right attitude to have. What I told him is that the scenarios are bigger and by the time he will understand the full picture I’m pretty sure he will quickly understand the reason for the choice.

“It’s important for me that he’s happy as well, happy for the team – it’s a one-two. Obviously, for him it’s a missed win but it’s been the opposite maybe in Belgium,” added the Ferrari boss.

Usually, teams follow a policy where they pit the lead car first and give them the benefit of fresh tyres.

Binotto said that was not an option in this case as Ferrari feared Leclerc, a 21-year-old in only his second season in Formula 1, would come out behind slower cars.

He was brought in on the lap after Vettel pitted. Binotto said they had not expected the four-times world champion to gain as much time (3.9 seconds) on his fresher tyres as he had.

“As a matter of fact, when we stopped Sebastian, we thought that Charles stopping the lap after, he would have remained ahead of Sebastian,” said the Italian.

Asked if Ferrari had considered swapping their drivers around given the unintended consequence of the pit strategy, Binotto said they had but ultimately decided against it.

“We are still discussing with our two drivers whether that was the right choice or not, something which internally we may still have a different opinion…” he said.

Leclerc said he had understood the situation a lot better than in the heat of the moment behind the wheel, “Obviously I wished I was one step higher today but it’s part of life. Sometimes it goes that way and I’ll bounce back stronger in (the next race) Russia.”