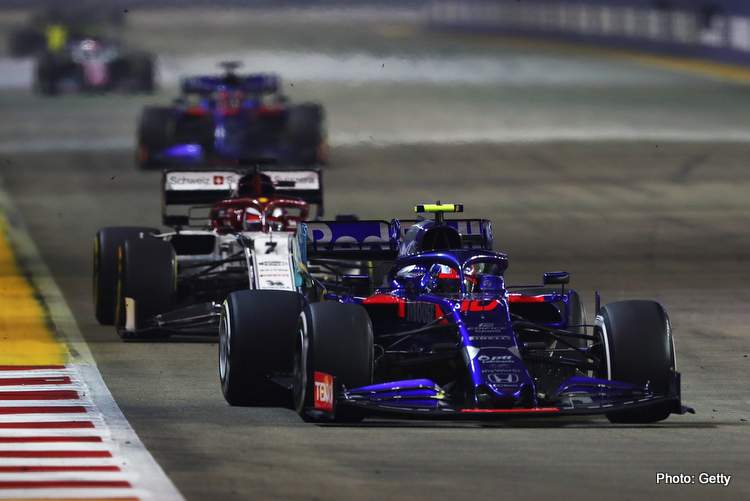 Toro Rosso report from the Singapore Grand Prix, Round 15 of the 2019 Formula 1 World Championship, at Marina Bay Street Circuit.

“I enjoyed that race so much! Things didn’t really come all together with the timing of the first safety car, but the last part of the race was really exciting. The beginning went pretty well for us, and I didn’t know it at the time, but we were running in P2 for a couple of laps before our pitstop, and that was cool!

“Then, when the safety car came out, we lost three or four positions which was a bit annoying. I gave it everything I had to pass Kimi and had a couple of exciting battles with Kevin and Lance, so it feels very good to score these points.

“It was a tough race, but a great result for the team in the Championship battle, as it’s quite close. I’m really happy with the way we’re working as a team, every weekend it gets better and we make a step forward, so we just need to keep pushing in the same direction for the next few races.

“Today wasn’t my day. When you have a race like this you just have to raise your hand, take the blame, and move onto the next one. There were chances for me to score points today but, unfortunately, I didn’t take them. I got stuck behind drivers and didn’t show my best driving.

“I don’t want to make any excuse, but I also had to deal with some kind of ‘fog’ on my mirrors, which made it harder to defend – I just had to give more space due to the lack of visibility. Finally, the collision with Kimi damaged my car making it even harder, but at the end my race was already compromised.”

Jody Egginton, Technical Director: “It’s been an eventful race for Toro Rosso tonight. Pierre pushed for a long opening stint and with the safety cars and good pace he showed, it played into our hands. We had a lot of tyre performance available towards the end of the race and we made good use of that but we couldn’t quite get past Lando at the end as he made good progress on the restarts.

“Pierre ended the race P8 to bring the team some valuable points. Dany’s first stint on the Prime tyre was a bit shorter than we wanted as the tyre wear dropped quicker than expected, so we tried to get him back into the game later on by switching his strategy.

“Unfortunately, he had some small issues with the car and struggled with the consistency, so we’ve not been able to get points with him. I think overall it’s been a good race as we came away with points and we didn’t lose ground in the Championship, which is satisfying.”

Franz Tost, Team Principal: “Like every year, Singapore is a highlight of the season, it was a fantastic atmosphere with full grandstands, that show that the interest in Formula 1 is very high, which is pleasing. We also saw a really interesting race from the beginning onwards, with plenty of overtakes and three safety cars, which increased the drama of the race.

“From our side, Qualifying didn’t go so well, but due to some penalties, Pierre started the race in 11th position and Daniil 14th. We decided to send them out on a different strategy, with Daniil starting on the Prime tyres and Pierre on the Base. Daniil wasn’t so happy with the Prime, reporting he had very poor grip level, so we called him in earlier than planned to help him find more pace.

“When the first safety car was deployed, we decided to change the strategy and call him in again to send him out on the Option tyre. He was able to make some good overtakes with the extra grip but, unfortunately, towards the end he had a collision with Kimi Raikkonen which led him to lose some positions and ended the race P15.

“Pierre drove a fantastic race, he had everything under control and he was also happy with the car and strategy. He was closing the gap to Norris but couldn’t manage to overtake him. Nevertheless, he finished the race in a fantastic eighth position, showing one of his best performances in a Toro Rosso car. Next week we head to Sochi and we are looking forward to having a similarly great spectacle like here in Singapore.”