Honda: We must continue to push hard 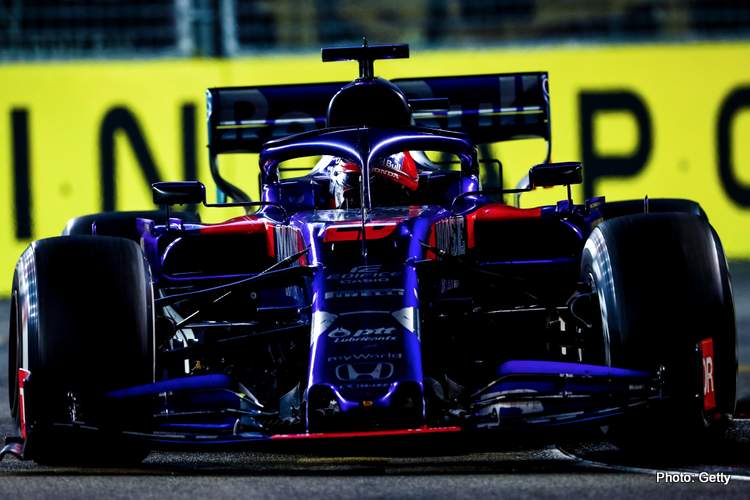 At the start of the race, Max Verstappen held position in fourth place while Alex Albon did likewise in sixth, and further back there were contrasting fortunes for the two Toro Rosso drivers.

Daniil Kvyat had started from 14th on the medium tyre but was struggling in the first stint and pitted on lap 12 for hards in order to try a different strategy. In the other car, Pierre Gasly started on the hard compound and ran a long first stint that saw him running in the top three before pitting for mediums just after half distance.

With the pace at the front being slow, Red Bull pitted Max early on lap 19 to switch to hard tyres and the move allowed him to jump Lewis Hamilton into third place. Alex pitted a lap later but was unable to gain a position, retaining sixth place. Max then spent the rest of the race putting pressure on the two Ferraris ahead and keeping Hamilton at bay, holding position to take his fourth podium of the season in addition to his two wins.

Alex was sixth and backed up by Pierre in eighth, who thanks to strong restarts after Safety Car periods saw him dispatch first Lance Stroll, then Kimi Raikkonen and finally Kevin Magnussen to score four points. Daniil was attempting to reach the points too when he tried to pass Raikkonen into Turn 1 and contact between the two forced him to pit again, limiting him to 15th place.

Toyoharu Tanabe, Technical Director: “As usual, Max produced a very strong race, making up one place from his grid position to finish on the podium, thanks to a good strategy that saw him undercut Hamilton. It was a good way to end the weekend.

“However, after their win in Monza, today we saw that Ferrari is now also quick on a technical track. As for Toro Rosso, Gasly produced some excellent overtakes, scoring a valuable four points. Kvyat’s pace wasn’t bad but he was unable to finish in the points.

“Overall, we got three of our four cars in the points, including Albon who delivered a solid performance on his first visit to this track. We know we must continue to push hard to get on terms with those ahead of us.”