Toro Rosso: We will just have to take some risks 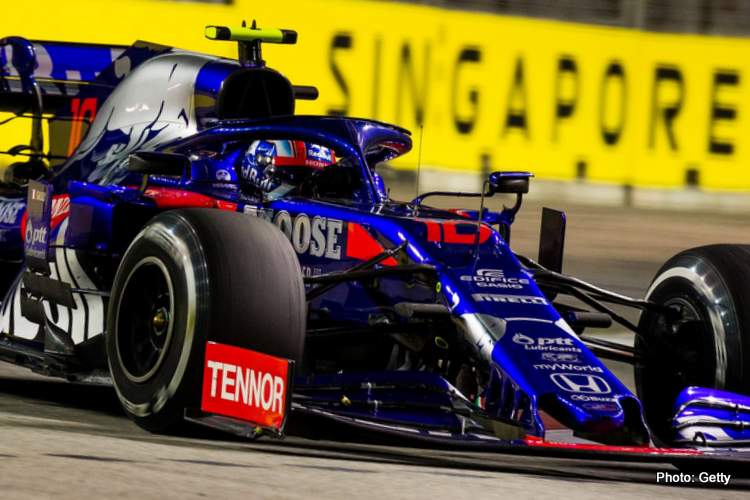 Toro Rosso report from qualifying for the Singapore Grand Prix, Round 15 of the 2019 Formula 1 World Championship, at Marina Bay Street Circuit.

“We knew before Qualifying it would be tight in the midfield to make it to the top 10 here. I managed to do it in Q1 with the ninth-fastest time, then in Q2 we just missed out by a tenth, so it was really close. It’s always a bit frustrating when it’s that close, but I think we did the best with what we had.

Tomorrow we will start the race P12, so we need to look at our strategy options to see where we can take advantage by choosing our starting tyres for the race. I’ll be pushing as much as I can, it’s a long 61 laps where a lot of things can happen, so it will be important to have a clean race and keep fighting until the end to hopefully score some points for the team.”

“I cannot be happy with my Qualifying, the last lap felt very poor and I knew once I crossed the line there wouldn’t be a chance for Q2. I ran into a lot of traffic which was unfortunate as it cost me some time, and a little mistake with the engine switch in Sector 1 did not help.

“Not taking part in FP3 hurt us quite a lot and at a track like this every lap counts. I wasn’t really in the rhythm when I went out on track for Q1 and I didn’t have a great feeling in the car. I expect a tough race tomorrow as it can be quite unpredictable around here, however maybe that will work in our favour, so we can have a chance to finish in the points.”

Jody Egginton, Technical Director: “After a reasonable Friday, today has been somewhat frustrating with a chassis side oil leak on Dany’s car in FP3. This prevented him getting any meaningful running and therefore the completion of the normal preparations. Pierre’s FP3 ran a lot smoother and we were reasonably happy with the car’s performance.

“Regarding Qualifying, Dany had a bit more work to do and unfortunately, we were not able to get beyond Q1 on this occasion, which is frustrating given the importance of grid position here, but we will just have to take some risks tomorrow and see what we can recover. Pierre was reasonably competitive but again, frustratingly, we just missed out on what was a very tight battle for Q3.

“Looking ahead to the race, overtaking is difficult here but If we can make good use of the tyres and any opportunity which might arise from safety cars, there could still be the possibility to move up the field.”