Renault: It was a productive Friday for the team 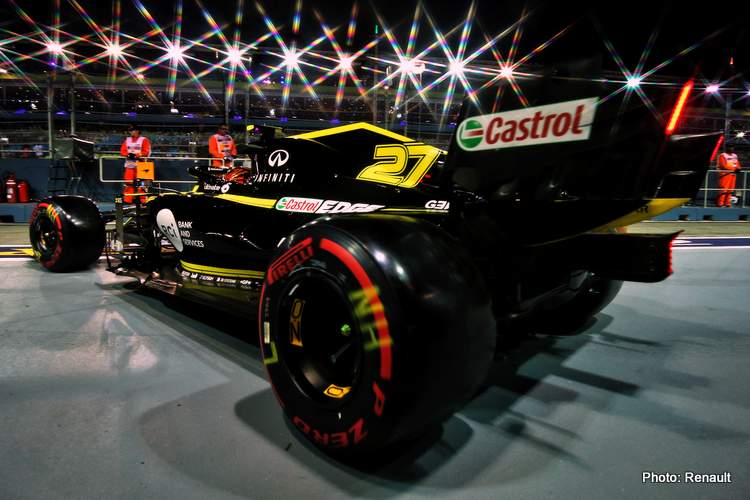 Renault F1 Team enjoyed a promising day of practice under the lights at the Marina Bay Street Circuit ahead of Sunday’s Singapore Airlines Singapore Grand Prix.

“It’s always tricky in Singapore as it’s a busy circuit and very humid. I felt at home on the low fuel runs and I had a good rhythm with the car doing what I wanted. The long runs seem to be more challenging at this stage and I struggled a bit in FP2. We’ll investigate that and see what’s going on. Apart from that, it was an okay Friday with no big issues. As expected, it will be tight this weekend but we have a competitive package to fight for points.”

“Today seemed to go alright. I have a bit to find on short runs but I’m not too worried. I know we’ll find some pace quite easily, it’s just some small things. The long runs seemed a bit more positive. The car was certainly there, but I just need to put it all together. We’ll work on that tonight and analyse the data. Nico was well in the top ten all day so it shows the potential of the car. I knew this would be trickier than Monza, but we’re not in bad shape.”

Marcin Budkowski, Executive Director: “It was a productive Friday for the team. We got through our programme as planned without any particular issues. We had decent pace on the Soft tyre and we look in good shape for qualifying. Our long runs were trickier here and it’s going to be a case of getting the tyres to last. We have data to work through to identify the right strategy which will, of course, depend on our qualifying tyre and position. Both cars will be close and it will be a competitive fight in qualifying, where we’re targeting Q3.”