Haas to Keep Magnussen and Grosjean For 2020 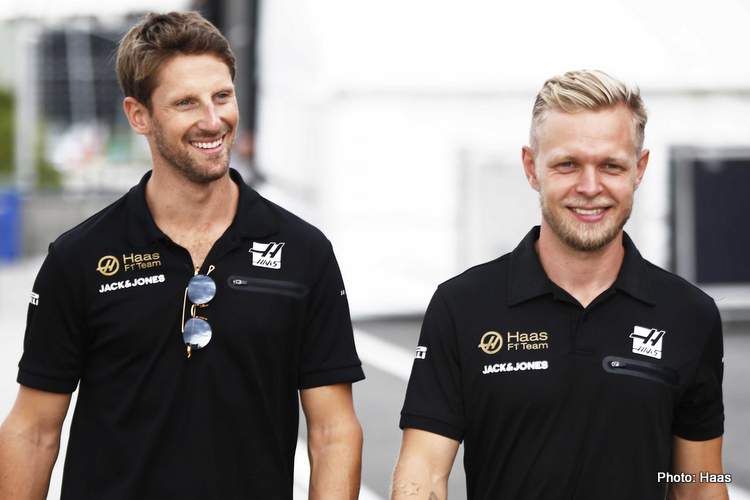 Grosjean and Magnussen will be partnered together at the American outfit for a fourth straight year as the team prepares for its fifth season competing in Formula One. Grosjean joined at the inception of the squad in 2016 with Magnussen signing on from 2017. The duo has combined to score a total of 166 points since pairing together in 2017 and last season their joint efforts helped Haas F1 Team to finish fifth overall in the constructors’ championship with 93 points – the Kannapolis-based outfit’s best placing to-date.

“Experience, and the need for it, has been one of the cornerstones of Haas F1 Team, and with Romain Grosjean and Kevin Magnussen racing for the team in 2020, we continue to have a driver lineup that offers us a solid platform to continue our growth. Their understanding of how we work as a team, and our knowledge of what they can deliver behind the wheel, gives us a valued continuity and a strong foundation to keep building our team around. It’s been a tough year for us in 2019 with the fluctuation in performance of the VF-19, but our ability to tap into our combined experiences will help us learn, improve, and move forward as a unit in 2020,” said Guenther Steiner, Team Principal, Haas F1 Team.

2019 has proved to be a testing campaign for Haas F1 Team with Grosjean and Magnussen scoring just 26 points heading into the weekend’s Singapore Grand Prix – the team currently placed ninth in the standings with seven rounds remaining.

Their first season together in 2017 saw Grosjean and Magnussen amass 47 points – scoring Haas F1 Team’s first double-points finishes along the way in Monaco and Japan. This allowed the team to equal its eighth-place finish in the championship from its debut season in 2016. Fifth in the points followed in 2018 including the squad’s best overall race finish at the Austrian Grand Prix, with Grosjean taking the checkered flag fourth followed by Magnussen in fifth.

Grosjean’s fifth consecutive season with Haas F1 Team in 2020 will also mark the 33-year-old Frenchman’s ninth full-time season competing in Formula One. With 10 career podium finishes to his credit and a veteran of 157 Grand Prix starts, Grosjean scored all 29 points for Haas F1 Team in its inaugural 2016 season and has totaled 102 of the team’s overall points tally of 195.

“I’ve always stated that it was my desire to remain with Haas F1 Team and keep building on the team’s accomplishments,” Grosjean said. “Having been here since the very beginning and seen the work both Gene Haas and Guenther Steiner put into the team to make it competitive, I’m naturally very happy to continue to be a part of that. To finish fifth in the constructors’ championship last season in only the team’s third year of competing was something very special. We’ve had our challenges this season, but we’ll use both the experience of last year and this year to move forward into 2020. I’m looking forward to working with Kevin (Magnussen) and the whole team and continuing our journey together.”

Magnussen finished a career-best ninth in the drivers’ championship in 2018, scoring 56 points from the team’s haul of 93. The 26-year-old from Denmark joined Haas F1 Team in 2017 after competing in Formula One for McLaren and Renault in 2014 and 2016 respectively. Having found a home with the American outfit, Magnussen has scored 93 of his career tally of 155 points with Haas F1 Team.

“I’ve had the comfort of knowing I’d be continuing with the team in 2020 and that’s very much been a positive throughout what’s often been a difficult 2019 season,” stated Magnussen. “Knowing we can work to make things better, improve our understanding of our situation, and get back to the level of competitiveness we showed last season – these are the things that excite me about 2020. We’re a team full of racers, led at the top by Gene Haas and Guenther Steiner. Nobody’s satisfied with how the 2019 season has played out, but the determination to turn things around is very much in evidence. I’m grateful the team have always believed in me and what I can bring to the table. We share a common goal and together with Romain (Grosjean), I’ll be giving it my all on-track for the remainder of this season and into 2020.”

Big Question: Have Haas made the right move retaining Grosjean and Magnussen?