Ferrari: We are bringing a few new parts to Singapore 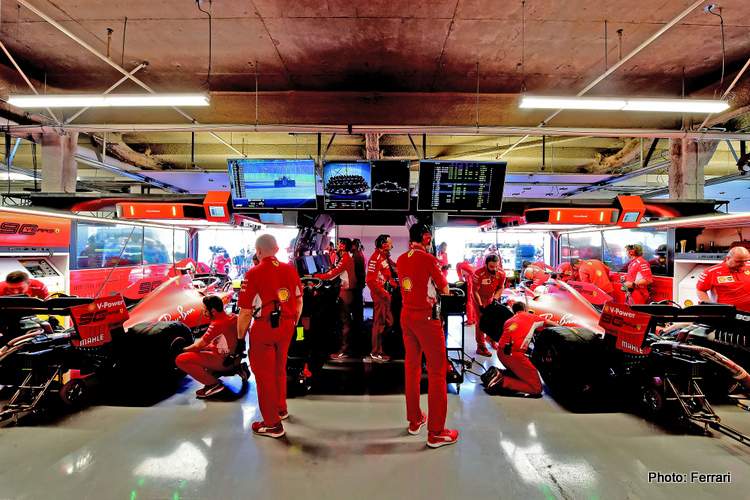 The world championship bids farewell to Europe and heads for Asia and Sunday’s 12th running of the Singapore Formula 1 Grand Prix, the 15th of 21 rounds this year.

The race, famous for being run at night, has always been held at the Marina Bay Street Circuit. The race gets underway at 20.10 local time (14.10 CET) with the track bathed in light from powerful lighting projectors. Scuderia Ferrari has won here twice, with a further four podium finishes and four pole positions to its name.

Before Formula 1. The first Singapore Grand Prix actually dates back to 1961. It was a Formula Libre race called the Orient Year Grand Prix, run on public roads in the Thomson Road area. Before Singapore gained independence in 1965, it also staged the Malaysian Grand Prix.

In 1973 the race was stopped on the grounds the track was too dangerous, especially the aptly named Devil’s Bend and so the city state no longer featured on the motor racing map. It then returned as part of the Formula 1 World Championship in 2008, this time on the 5.063 kilometre Marina Bay Street Circuit.

The wins. Scuderia Ferrari’s first win in Singapore came in 2010, when Fernando Alonso dominated the event, securing a memorable grand slam of pole, win and fastest race lap. The Spaniard spent the entire race fending off Sebastian Vettel in the Red Bull, who could not find a way past, finishing less than three tenths of a second behind the winner.

The German champion took our most recent win here, in 2015, his first year with Scuderia Ferrari. Just as Alonso had done five years earlier, Seb started from pole, controlling the race from start to finish, also holding off a Red Bull, this time driven by Daniel Ricciardo, the Australian depriving the German of the grand slam by posting the fastest race lap. No matter, for Seb and the team it was the third win of the year.

Disappointment. The Maranello squad also endured a couple of disappointing moments in Singapore. In 2008, Felipe Massa was in the lead, having started from pole, but after refuelling, he drove away from the pits before the mechanics had finished refuelling and the hose was left attached to the car.

The mechanics ran the length of the pit lane to remove it, but Felipe could do no better than 13th in a race which was won by Alonso in the Renault. In 2017, the two Ferraris of Sebastian and Kimi Raikkonen collided just after the start and both had to retire there and then.

Long race. The race distance is 61 laps, equivalent to around 309 kilometres and the race often comes close to the maximum two hour time limit, also down to the fact the Safety Car is nearly always called out as there are hardly any escape roads on this fantastic street circuit.

Charles Leclerc: “Singapore is maybe the toughest track for us drivers physically, just because of the heat and the humidity. It’s always a special place to go, because it’s a night race. I really enjoy driving at night and somehow, it feels a lot quicker than it does during the day. It’s just a unique weekend and I am really looking forward to being there.

“After two positive weekends in Belgium and Italy, the race in Singapore doesn’t look as good on paper for us, because of the very different circuit layout, featuring lots of of slow corners and fewer straights. It might be a more difficult weekend for us, but we will give our all to have a good result.”

Sebastian Vettel: “After Spa-Francorchamps and Monza, we are going to a very different circuit: Singapore, which is one I really enjoy. It´s a street circuit, bumpy and with no room for errors and it’s one of the few races run under lights.

“We stay on European time, which is a bit strange because we leave the circuit when the locals are getting up with a six-hour time difference. We need maximum downforce and have the three softest tyre compounds.

“We have seen before that anything can happen in this race, so the final result is hard to predict. Off the track, there will also be a lot of pressure on the teams as this race is back to back with Russia.”

Mattia Binotto Team Principal: “Coming from back to back victories is a good feeling for the team and for our tifosi, but in reality these victories are already behind us and we are well aware that Singapore will present new challenges and a layout in which our car is not as strong as at other circuits.

“We are bringing a few new parts there as part of our effort to close the gap to the competition, at a track that features predominantly slow-speed corners. This race also sees the return of the Hypersoft tyre compound, which has not been used since the Canadian GP.

“All of this, together with the traditionally eventful close racing in between the barriers, on the city streets – conditions that both Sebastian and Charles love very much – will certainly make for a tough but exciting race weekend.”