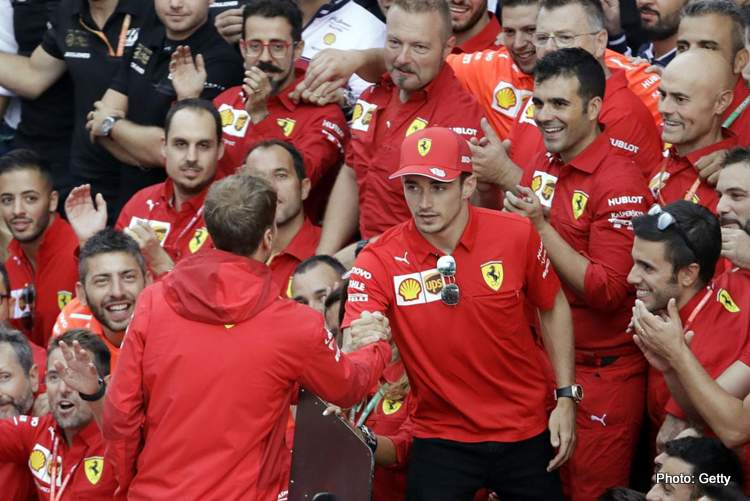 The demise of Sebastian Vettel took another significant step in the wrong direction for the German after a humiliating Italian Grand Prix, where the error-prone four-times Formula 1 World Champion again made mistakes and while teammate Charles Leclerc powered to a famous victory he finished 13th.

Seldom, if ever, have we seen sucha blatant shift of power between drivers within a team as we have witnessed, in the past few races, at Ferrari where Vettel is being usurped by a man a decade younger than him.

Needless to say, the Italian media are all but trumpeting: The King is dead, long live the new King. Leclerc is the team’s new superhero, while Vettel’s shares are in freefall.

Here is what the big hitters of Italian media had to say since the race on Sunday:

Gazzetta dello Sport: “At Monza back in the victory circle thanks to a phenomenal performance by Leclerc, who impresses more and more with his talent. On the podium was a 21-year-old who has conquered everything in just six months: The Scuderia, the love of the fans and probably the whole future of Ferrari. His triumph is similar to a coronation, Ferrari again creates a victory in Monza, who had failed in the past nine years.”

Formula Passion: “The Italian Grand Prix was a long nightmare for Sebastian Vettel. On Saturday the German was controversially mocked in qualifying by his teammate, while on Sunday he made two mistakes and ended 13th. The triumphs of Leclerc and Vettel’s difficulty in adapting to the SF90 are not the only problem for him as a race ban looms thanks to penalty points accumulated for his waywardness.”

Corriere della Sera: “Leclerc delivered a masterpiece. The young Ferrari warrior defeated the two Mercedes. The young driver does not make mistakes, he manages a breath-taking pace, he masters the race perfectly with the strategy of a veteran campaigner. Leclerc drives like a champion. Monza 2019 revealed a driver with extraordinary talent and unique qualities.”

La Stampa: “Leclerc fends off the pressure from Hamilton and gives Ferrari an unforgettable victory. Thanks to his triumph, the devastating performance of Vettel rendered him to a secondary role for Ferrari. With Leclerc Ferrari can finally dream again.”

Tuttosport: “Ferrarissimo! Fans crazy about Leclerc, red triumph in Monza at the end of a crazy race and a stunning duel with Hamilton. Vettel crashes in the crisis.”

Corriere dello Sport: “Leclerc sends Monza into a frenzy with a Ferrari victory! Ferrari had not won at Monza since 2010 with Fernando Alonso. For Sebastian Vettel it was a race to forget.”

La Repubblica: “Nine years on and Ferrari finally wins again in Monza. At the age of 21, Leclerc is the youngest Maranello winner [winner at Spa] and repeat his success from the previous week, in only his first season with the Scuderia.”

Big Question: How will Seb tackle the power shift within Ferrari?