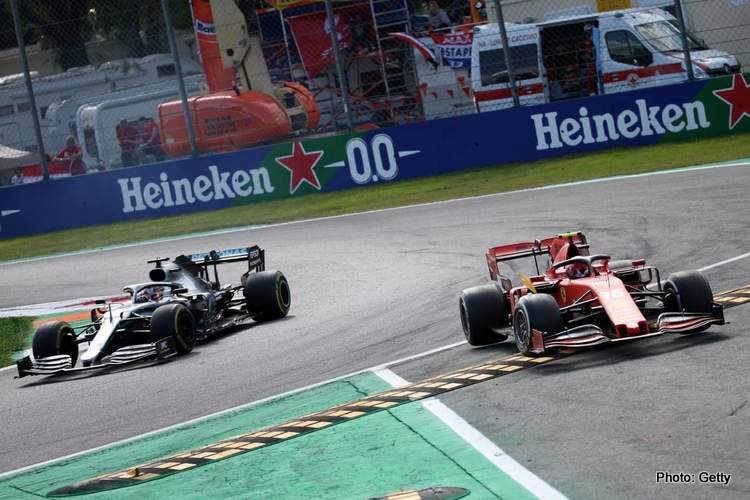 After Belgium, Italy could be the place for Ferrari to shine again as Monza is known as the temple of speed and Ferrari has the biggest straight-line speed requirements on the Formula 1 World Championship calendar

Last time a Ferrari won, was with Fernando Alonso in 2010 so the Tifosi had high hopes. The race itself was exciting, some battles were on the edge. Here are a few thoughts on the Italian Grand Prix.

Did Ferrari deserve to win?

From Friday onwards, they were the fastest and like Spa, they had the potential for pole position. It was again Leclerc who made it happen while Vettel was there or thereabout. During the race, it was clear that Leclerc had the pace in front and was able to keep Mercedes at bay. Vettel however, had a hard time keeping up and being too much on the limit.

Then, Vettel pushed too much and spun. What happened next was just stupid when he came back on track and clipping Stroll, who spun off track. Vettel got penalized and his race was over. Meanwhile, Leclerc stayed in front with Hamilton close on his tail, trying to pass him.

When Leclerc managed to hold on, Hamilton was asking too much of his tyres and at one point went straight, giving 2nd position to Bottas. Leclerc fended off Bottas as well and so he became the winner of the Italian Grand Prix at Monza.

Did Leclerc deserve to win? Yes, he did. It was a tough fight from start to finish but he held on and delivered for Ferrari.

Has Mercedes lost their edge?

I think it isn’t so much that they have lost their edge but that other teams have closed in on them. Next, to that, it was also down to the characteristics of both Spa and Monza that contributed to Ferrari utilizing their straight-line speed. Come Singapore, things might be “back to normal”.

Leaving Monza with a double podium finish for Valtteri and Lewis after an action-packed #ItalianGPhttps://t.co/jEZS22066v

Did Red Bull make the best of it?

They knew at Spa that there would be penalties and that in Monza, Verstappen would be the one to start from the back. Albon still had a solid race with a few great overtaking moves. Some worked and some didn’t but he held his own and finished 6th, which is a great outcome.

Verstappen’s race was already effected at turn 1 when everyone bunched up and he couldn’t avoid contact with Perez. Still, with an extra pitstop, he managed to finish 8th. Bit sad we didn’t see much of his overtaking moves on the world feed but then again, the one behind the buttons for the live feed missed a lot of action.

Who was Best of the Rest?

Without a doubt, that would be Renault. Both Ricciardo and Hulkenberg were on it all weekend. They both had a great start and throughout the race, strategy worked like a charm and they finished 4th and 5th.

“Our drivers have shown what they can do with a competitive car. They have been remarkable all the way through including in tricky situations.”
Cyril Abiteboul – #ItalianGP, Sunday
Full report https://t.co/buQS8IucmB#RSspirit pic.twitter.com/GTx8lt8wOA

Easy to say Vettel since he made a few stupid mistakes but as a number of races now, it was Haas that disappointed. Grosjean having issues with the balance after some contact and Magnussen stopping with a hydraulic issue. I have no idea what is going on at the American team but they just can’t seem to find the answer.

Today (Monday) it was announced that the title sponsorship with Rich Energy was terminated with immediate effect. Whether money was paid or not, it could mean that the team didn’t have the financial means to develop faster.

That’s a tough one. Renault ofcourse but I already spoke about them. Another surprise for me was Albon. In just his second race for RedBull, he did an excellent job. He is a quick learner, doesn’t make many mistakes and is agressive on track when he needs to be. Perez was a bit invisible throughout the race but kept Verstappen behind him for many laps. And ofcourse the P9 of Italian Giovinazzi.

There’s lots more where that came from! See what else @SChecoPerez had to say about Monza right here https://t.co/XRnG0lz45C#MakeItCount #F1 #ItalianGP

Antonio ”It was a positive day for Italy today. I want to dedicate the two points to all the Tifosi here. It’s a great feeling to score points as the only Italian driver in my home race”

Other points worth mentioning?

I kinda like the “yellow card” in F1 through the black and white flag. It happened with Gasly at Spa and at Monza, Leclerc got it. Instead of throwing the book at drivers and give them penalties as soon as they fight a bit too hard, they now get a warning by getting shown the black and white flag. I think it’s a good thing as the racing continues and the outcome doesn’t get controlled via racecontrol.

And warns to expect to see it shown more routinely >> https://t.co/qzOJoF7gYU#F1 #ItalianGP pic.twitter.com/PVuhIB8LuO

That’s an easy one. Ferrari, Italy, Leclerc, Tifosi and Vettel. All for different reasons but it was clear that it meant a great deal for Ferrari and fans alike that a driver in red won at Monza.

No F1 this weekend but there are other categories that will have some fun so they are already updated on the #MsportXtra Weekend Outlook.