Masi: Leclerc squeeze on Hamilton was a professional foul 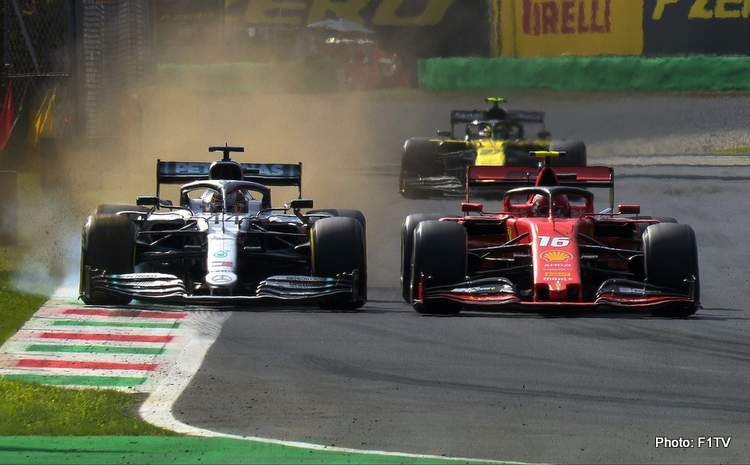 While there is a valid argument for those who believe that Charles Leclerc pushed the limits of Formula 1 rules with his defence of the lead during a riveting Italian Grand Prix on Sunday.

The Ferrari driver was shown the black-and-white “unsportsmanlike” flag for his aggressive blocking of Mercedes driver Lewis Hamilton when the pair battled it out for the lead at Monza.

Drivers have been penalised for much less in the past, but of late the ‘let-them-race’ lobby has gathered steam and it was put out there that the drivers would be allowed to get on with it with as little interference as possible to avoid a repeat of the Canada disappointment with Sebastian Vettel and Hamilton.

With regards to the latest marginal call, some believing the Monza crowd swung it for the Reds, FIA F1 Race Director Michael Masi explained, “The rules remain with regards to a car’s width of room.

“It’s quite obvious here that Charles has squeezed Lewis and, consistent with what happened last weekend in Spa with Pierre Gasly, as a result, it was the bad sportsmanship flag or the black-and-white flag, that was displayed to Car 16 [Leclerc] for the move and the squeeze in the braking area.

“For small infringements that are, let’s call it, a ‘professional foul’ but don’t go beyond the line, we’ll be absolutely using the black-and-white flag more and more.

“It’s a sign to everyone that the driver’s on notice because you only get one for the race. If you do it again, the drivers have all been advised that any other infraction will be referred to the stewards.

“It’s ultimately the stewards’ decision if somebody gets penalised or the bad sportsmanship flag, but if the stewards feel there was more to it then we absolutely have the capability of issuing a penalty and that’s exactly where it sits.”

As for the Hamilton-Leclerc incident, Masi said, “If there was resultant contact we would have looked at it in a bit more detail, but effectively under the ‘let them race philosophy’ that the teams, the F1 Group, the drivers and the FIA have worked together on throughout the year, and giving the teams the advice at the last event in Spa, we will be using the black-and-white flag more often – at their request I must say.”

Big Question: Would Charles have been penalised if the race was not at Monza?