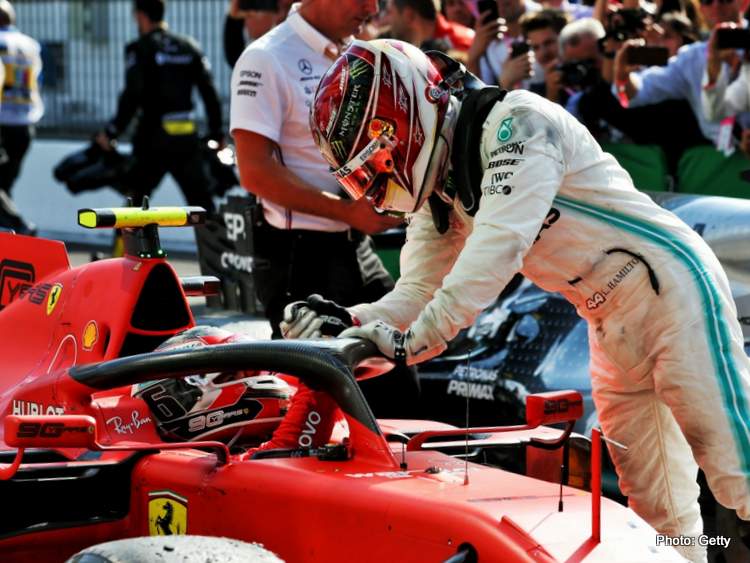 Five-time Formula 1 World Champion Lewis Hamilton has warned that he may not always be as compliant when he gets in a duel with the sport’s latest shooting star Charles Leclerc.

Asked what would have happened if he wasn’t thinking about his sixth world championship, the Mercedes driver said after the Monza race: “We would have collided.”

Hamilton says Leclerc is actually among the more “respectful” drivers on the grid, but he warned that he too can match that level of aggression.

“If it happens in the opposite direction, I hope he’s also cool with it,” said the championship leader.

Ferrari’s Leclerc was even shown the black and white flag for unsportsmanlike driving at Monza, but Hamilton’s boss Toto Wolff thinks an actual penalty would have been appropriate.

“If they keep doing that [showing the flag], we’ll see more cars touching in the future,” he predicted.

After the race, although he did not show it, Hamilton might have been upset about the move that many believe would have been penalised had the Ferrari driver made the block anywhere else other than Monza. This was a blatant and more deliberate move than his teammate Sebastian Vettel’s block on Hamilton during the race in Canada.

But the Mercedes driver refused to be drawn into debate over the matter and told reporters after the race in which he finished third, “It doesn’t really matter what I think. I don’t really have anything to say about it.

“We’ve gone over and over it multiple times, it’s pointless me bringing it up. I avoided the collision and just kept focusing on trying to get close again.

“We’ve just constantly asked for consistency. There was a rule put in place, and then it wasn’t abided by. They used different consequences for the rule today. I don’t know why that was the case. I guess the stewards woke up on a different side of the bed this morning, I don’t know.”

“It seems like the new generation get away with a lot more in that space, of how they manoeuvre their car compared to I’d say the more experienced drivers. But it’s good knowledge, now I know, and I look forward to the next one,” he added.

When Max Verstappen shifted the boundaries of the rules of engagement during his duel with Leclerc in Austria earlier this year, the Monaco Kid has upped his aggression level at Silverstone and again at Monza on Sunday, this time when up against Hamilton.

The Mercedes driver has now laid down the gauntlet for what is sure to become a gritty rivalry as Leclerc finds his winning mojo and Ferrari finally raise their game.

As for Leclerc, Hamilton said, “He did a fantastic job today. I put on as much pressure as I could. We had a couple of close moments, I think we can probably talk about it in private together, but there’s nothing major, and we continue to race. I’m looking forward to more races together.”

Big Question: Was Monza when the HAM-LEC rivalry got serious?