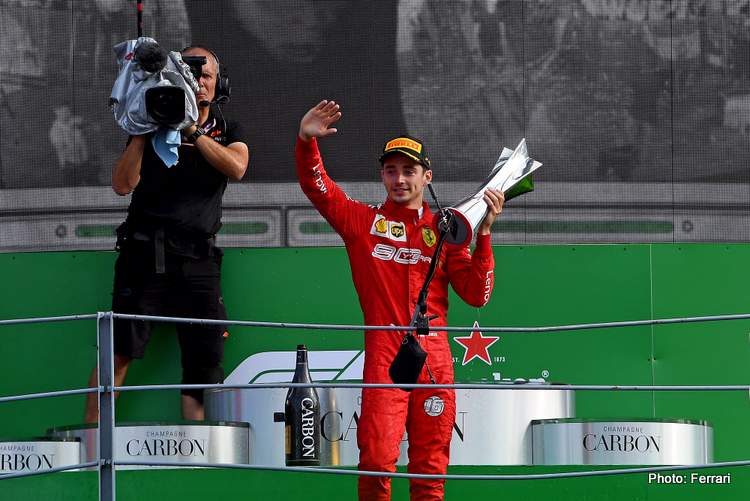 And, as Formula 1 Managing Director, Motorsport, Ross Brawn explains, just as the Monegasque youngster’s battling win sparked an explosion of passionate celebrations among the tifosi who’d been waiting nine years for a home win, so it could lead to a renewed charge by the Prancing Horse in the latter stages of this season, as the team’s progress since the start of the summer has suggested.

It wasn’t a completely perfect weekend for the Scuderia, however, and after another difficult weekend for Sebastian Vettel in Monza, Ross explains why the team needs to rally around its senior driver and why no one should doubt the German’s skills.

First of all, we need to say thank you 200,000 times over, for that was the number of spectators who turned up over the four days of the 2019 Italian Grand Prix, the largest crowd ever at this event.

Once again Monza put on a great show

The Monza crowd is incredibly special and the atmosphere at the circuit is amazing. I was fortunate enough to stand on the Monza podium in 2003 to collect the constructors’ trophy while I was with Ferrari and I can assure you that from up there, above a sea of fans, it’s an incredible experience. It hits you like an enormous wave and the sensation is truly unforgettable.

Once again Monza put on a great show and Sunday’s race was balanced on a knife-edge from the moment the lights went out to the very last lap. It was a fitting end to a week that began with a celebration in Milan of the race’s 90th anniversary, and also that of Scuderia Ferrari, when it was announced that the Italian race would stay in Monza until at least 2024. Arrivederci Monza, see you next year!

Clearly, when Ferrari wins at Monza the party really gets going and that’s just what happened on Sunday as Charles Leclerc took the chequered flag at.

Indeed, it reminded me of that 2003 race, when Michael Schumacher, in the F2003-GA, and Juan Pablo Montoya, in an on-song Williams FW25, fought it out almost all race long.

The battle between Michael and Juan Pablo on the opening lap at the Roggia chicane was very similar to that between Leclerc and Lewis Hamilton at Ascari on lap 23 of Sunday’s race. The Ferrari man did not back down and was on the limit of what the rules allow, as great champions always are and have to be. In fact, Leclerc was also very shrewd in the way he handled the situation in that truly bizarre Q3 qualifying session on Saturday.

Charles had an incredible weekend

Following on from his win in Spa the previous Sunday, Charles had an incredible weekend. The thing that impresses me most about him is how quickly he learns from everything he does, getting better all the time, as a driver and as a man.

And, as was the case in Belgium, the team did a very good job, for example when it opted to put Charles on the Hard tyre thus putting him on a different strategy to Hamilton. The overall package might be slightly inferior to that of Mercedes, but Ferrari made the most of what it had, attacking in qualifying and defending tooth and nail in the race, producing its second consecutive win. The last Ferrari man to do that in these two races was Michael in 1996. Maybe history is beginning to repeat itself.

Only one man in the Ferrari garage had little to smile about on Sunday – Sebastian Vettel. The four-time world champion had a really difficult weekend in Monza.

In qualifying, he felt he’d been let down by his team-mate at the end of Q3 and so was unable to take a shot at getting pole. However, what happened in the race was down to him alone. Sebastian made two mistakes on lap seven, spinning and then hitting Stroll and the errors look even worse in light of Leclerc’s double victory in Spa and Monza.

Vettel is clearly one of the greats of our sport

It’s an unavoidable fact that no matter who the driver is and regardless of how good things are in the team, your first rival is always your team-mate. To a certain extent, Sebastian is experiencing what he felt at Red Bull in his final year there, in 2014, when he found himself up against Daniel Ricciardo, a youngster setting incredible pace.

Vettel is clearly one of the greats of our sport (you don’t win four titles without being so), but at this tough time he really needs the support of the team to regain the confidence he seems to be lacking at the moment. That, as well as pushing on with the car development, has to be a priority for Mattia Binotto in the coming weeks. It won’t be easy, but it is essential especially in terms of 2020.

For Mercedes, the colossus of the hybrid era, not having a driver on the top step of the podium for two consecutive races is rare indeed. But after the summer break, and after a dominant first half of the campaign, it’s as though the Spa-Monza double header had been designed to put the Silver Arrows in a difficult situation.

Still, despite Ferrari carrying a straight-line speed advantage that gave then the edge on more power-sensitive tracks with long straights, the world champions still managed to get both their drivers onto the podium.

Additionally, Hamilton in Spa and Bottas in Monza were less than a second behind Leclerc at the finish line. It shows that Mercedes still has the best and most rounded package and there is little sign of their dominance being ended this year.

Red Bull and Ferrari have made substantial progress

However, if you were to take the results from the summer races, from France onwards, the standings would show that things are a lot closer than as a cursory glance at the 14-race total shows. Hamilton would still lead on 122 points, but his lead over second-placed Leclerc would be just 12 points and Verstappen on 97 would still be in the hunt for the title, with Bottas (88) and Vettel (69) further back.

Red Bull and Ferrari have made substantial progress but it’s true that where one does well, the other doesn’t. Mercedes, meanwhile, are always in the hunt for victory, irrespective of track characteristics. The more you win, the more you want to win and there’s only one thing Toto Wolff will be asking his guys to deliver in Singapore.

Renault picked up a healthy 22 points in Italy

Finally, we come to the championship for those outside the top three teams. I don’t mean to offend anyone by saying this, it’s just a fact and, as I keep saying, we are working to fix it in the long term. Yet again in Monza, they all put on a great show and also threw up a surprise, in that the trophy for the best of the rest went to Renault.

On the fastest track on the calendar, it scored its best result of the season, with Daniel Ricciardo fourth (though he was 45 seconds behind the winner) and Nico Hulkenberg fifth.

The French team picked up a healthy 22 points in Italy, after taking just 15 in total from the previous six races. Renault was also very competitive in qualifying, especially in the first sector, showing that the French power unit had made good progress in terms of pure power.

The Italian GP result puts Renault into fifth place in the Constructors’ Championship standings, though they are currently 31 points off the team holding their stated target position of fourth.

Clearly, finishing the year behind one of its customer teams would be a let down for the Regie and it promises to be very close fight in the final third of the season, not forgetting that Toro Rosso and Racing Point are still in the frame. It should add even more excitement to the final part of the year.