Leclerc triggers frenzy in Italy on Vettel’s most miserable day 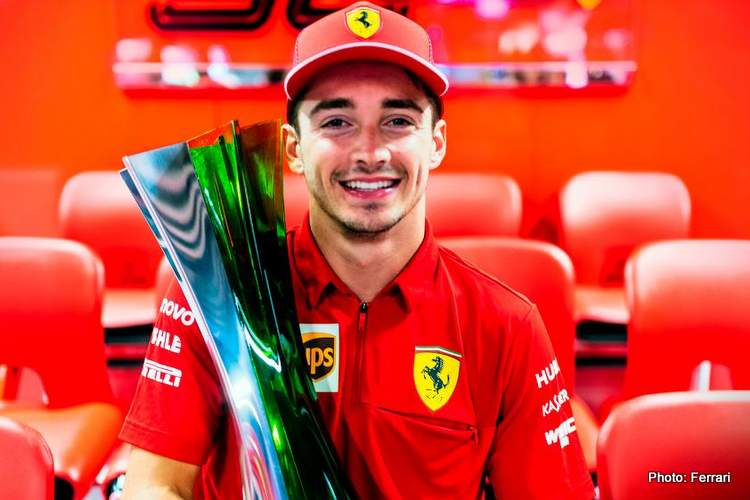 Valtteri Bottas was second for Mercedes with five-times world champion Lewis Hamilton a distant third after tyre wear took its toll in a thrilling battle with the 21-year-old Monegasque.

“What a race! I have never been so tired,” gasped Leclerc as a sea of fans, starved of success at Monza since Fernando Alonso won in the red overalls, swept onto the pit straight to party below the overhanging podium with flags and flares.

“Winning here is just a dream,” continued the winner, switching to fluent Italian to address a crowd cheering a fitting triumph on the 90th anniversary of both Monza and Formula One’s most glamorous team.

“Last weekend (in Belgium) was my first victory, but the emotion of winning here is 10 times that,” said Leclerc, now a two-times winner — and Ferrari’s sole one so far this season — in only his 14th race for Ferrari.

Hamilton’s lead over closest rival Bottas was cut to 63 points from 65, with the Briton limiting the damage by making a late pitstop for fresh tyres to set the fastest lap and gain an extra point.

“He did a great job, congratulations to Ferrari,” said Hamilton, who took the fight to Leclerc from the start but dropped behind Bottas 10 laps from the end when he cut the first chicane.

“A lot of pressure from both Valtteri and I. I did the best I could. Obviously following so closely for such a long time, the tyres eventually just went off the cliff.

“But nevertheless they were just quicker today, quicker in a straight line, so even if we did get close we couldn’t pass. So not our day but still strong points for the team,” added the 34-year-old.

Leclerc’s teammate Sebastian Vettel had an afternoon to forget, going from bad to worse at the one circuit where every Ferrari driver wants to impress.

While Leclerc led from pole position, the four-times champion spun off, plunged to last place and served a 10 second stop/go penalty for a dangerous return to the track.

He was then lapped by his impressive teammate, who is now 13 points above him in the standings and fast becoming the main man at Maranello.

Mercedes lead Ferrari in the constructors’ standings by 154 points.

“I lost the rear, a mistake by me,” the German, 13th at the flag, said of the incident. “A good day for the team but not good on my side. I can’t be happy with my day today.”

Australian Daniel Ricciardo was fourth for Renault, just ahead of teammate Nico Hulkenberg in a strong race for the French manufacturer.

Antonio Giovinazzi, the first Italian to compete in his home race for eight years, was ninth for Alfa Romeo and British teenager Lando Norris took the final point for McLaren.

Vettel’s early spin drew the ire of the stewards when he steered his Ferrari back on track into the path of other cars, with Canadian Lance Stroll making a glancing contact and also going off.

Stroll, the innocent party turned offender, then almost hit Toro Rosso’s Pierre Gasly when he came back on and was served with a drive-through penalty.

Leclerc and Hamilton, meanwhile, went wheel-to-wheel, with the Ferrari driver shown a black and white flag — the equivalent of a yellow card in soccer — for squeezing the Mercedes off at the second chicane on lap 23.

“He didn’t leave a car’s width,” exclaimed Hamilton over the radio. “He pushed me off.”

Leclerc’s response to the flag was one of puzzlement: “Why?”

The radio crackled back into life later on when Leclerc made an error and seemed to change line while braking, blocking Hamilton in his slipstream.

Bottas led briefly when Hamilton and then Leclerc pitted, with the Finn stopping later and his fresher tyres coming into play in the closing stages.

“This is your win,” he was told over the radio but a mistake three laps from the end primed the Ferrari ‘tifosi’ for the party as Leclerc took the chequered flag first for the second time in eight days.

Big Question: What now for Seb?