Red Bull: A good recovery by both drivers 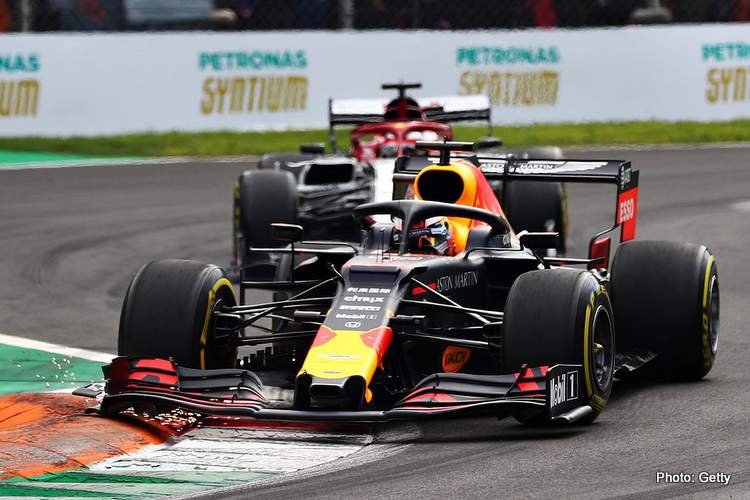 A tough, combative Italian Grand Prix saw Alex score eight points for sixth place, while Max battled from the back of the Monza grid to take eighth place and four points at the chequered flag.

Both Bulls were involved in minor incidents soon after the lights went out at the start of the race. Alex didn’t get the best getaway and he dropped to P10 on lap one. Max, too, had a tricky start, tangling with Alfa Romeo’s Kimi Räikkönen and Haas’ Romain Grosjean into the first corner.

That necessitated a visit to the pit lane for Max, where he took on a new nose cone and swapped his starting medium tyres for softs.

At the front, pole sitter Charles Leclerc of Ferrari held his advantage and took the lead ahead of Mercedes’ Lewis Hamilton and Valtteri Bottas. Behind them Sebastian Vettel in the second Ferrari lost out to Renault’s Nico Hulkenberg early in the lap and dropped to P5.

Alex was soon climbing the order but he again hit trouble on lap three. He passed eighth-placed Carlos Sainz into the Variante Roggia, but the Spaniard fought back and Alex was forced off track at the next corner. The clash dropped him back to P11.

The next major incident came on lap five when Vettel lost control at Ascari. The Ferrari driver spun in mid-corner and slid off track. He quickly rejoined, though in a manner that forced the onrushing Lance Stroll to also spin. The Racing Point driver then also mirrored Vettel’s unsafe return to the track and Toro Rosso’s Pierre Gasly was forced to go wide into the gravel.

The incidents resulted in Vettel getting a 10-second stop/go penalty, while Stroll received a drive-through penalty. Both drivers made their way to pit lane to serve the sanctions and dropped to the rear of the field. It meant that by lap 16 Max had climbed to P14 and Alex was up to P7 after executing a clinical pass on Alfa’s Antonio Giovinazzi.

Hamilton was the first of the leading pack to pit, on lap 19. The Mercedes man opted for medium tyres and rejoined in fifth place. Ferrari covered with Leclerc pitting on the next lap for hard tyres.

He emerged ahead of Hamilton but the Mercedes driver quickly began to close the gap. Leclerc passed Hulkenberg around the outside of Parabolica to regain third place and that allowed Hamilton attack into turn one and again into the second chicane. Leclerc defended hard, however, and Hamilton was forced to cut the chicane. The Ferrari driver’s defence earned him a black and white flag for unsportsmanlike conduct.

Alex made his sole pit stop on lap 26, rejoining on medium tyres in P12, which soon became P8 as the pit window took effect. Max soon followed his teammate to the pits, on lap 27, and this time he took on hard tyres as he prepared for a race to the flag from P13.

At the front, Hamilton was putting Leclerc under heavy pressure and on lap 36 the Monegasque driver made a mistake. He outbraked himself on the approach to turn one and was forced to cut the first chicane. Hamilton tried to pounce into the second chicane and Leclerc again defended robustly to hold off the challenge.

Further back, Alex was now gaining ground on Hulkenberg and with 15 laps to go he had cut an 11-second deficit to the Renault to just seven seconds. Max, too, continued to march forward and in the closing stage he found himself in eighth place.

Hamilton’s pursuit of Leclerc came to end with 13 laps to go. The Briton outbraked himself into turn one and was forced to cut the chicane. That allowed Bottas to sweep past and claim second place.

Max got inside DRS range of Racing Point’s Sergio Pérez but the Mexican proved to be a tough opponent and as the laps ebbed away he couldn’t find a way past and his march forward ended in P8.

It was a similar story for Alex. With five laps remaining he had reduced the gap to Hulkenberg to two seconds. But time was running out and though he pushed to the maximum Alex crossed the line in sixth place, just 1.1s behind the Renault driver.

Ahead Leclerc comfortably held off Bottas to take his second career win and victory for Ferrari on home soil. Hamilton took third after making a late pit stop for new soft tyres that allowed him to claim fastest lap. Renault’s Daniel Ricciardo and Nico Hulkenberg were fourth and fifth respectively. Behind Max the final points positions were taken by Giovinazzi and Norris.

Alex Albon, 6th: “There were positives for me even though the race didn’t go as planned. It isn’t the easiest track for us and we had quite an unlucky weekend in the qualifying. I didn’t have a great start and had to fight my way back through the field. Unfortunately, we didn’t have the pace on the straights to overtake so I had to do my manoeuvres on the corners. That resulted in a lot of side-by-side action and at one point I just lost a bit too much grip going that wide so it started to get messy. I had a few offs and took a five-second penalty. However, my race pace is getting better with the car and I feel I have made a good step up from Spa so personally speaking I am happy. Hopefully, Singapore will be better for me as there will be more downforce and more corners. I think there is a lot more to come and I’m feeling more competitive.”

Max Verstappen: 8th: “I got front wing damage under breaking into Turn 1 as everyone slowed up and I clipped Sergio’s rear tyre. We then pitted for a new front wing and the race was still on as I had really good pace in clean air. I managed to pass quite a few cars but we got unlucky with the virtual safety car as it came out the lap after I pitted and three or four cars which I had already overtaken were back in front of me. I passed them all again but it was pretty painful on my tyres and then at the end, I got stuck behind Perez for the second time in the race. I just couldn’t get past him as he was so quick on the straights. We have made some steps forward with the pace of the power unit but we will, of course, keep working hard to improve even further. With what happened at Turn 1 coming through to eighth isn’t too bad and these things are always more likely to happen when you start at the back. The last two races were always going to be difficult for us and now I’m looking forward to having a more normal race weekend and starting closer to the front.”

Christian Horner, Team Principal: “It was a good recovery by both drivers in what turned out to be a difficult race. Alex lost a couple of places on the first lap and was fighting his way back through the field but he got run wide with Carlos Sainz which dropped him back behind a couple of cars. He started making up positions before unfortunately picking up a five-second penalty whilst passing Magnussen, which he had to serve at his pit stop. Overall, it was a good recovery drive from Alex to come back up to P6. As for Max, he started the race from the back of the grid due to the engine penalty and he, unfortunately, incurred some front-wing damage at the first chicane. This meant he had to pit for a nose change on the opening lap, which the boys did in under 10 seconds and then the virtual safety car came out one lap later which was unlucky. Once he was in clear air, Max’s pace was equal to that of the leaders and he was able to make up some good ground despite a slight issue with the rev limiter in the tow which made it very difficult for him to overtake. Nonetheless, coming from the back of the grid to P8 with an extra pit stop and with Alex in P6, we leave Europe and now look forward to the final stage of the season starting in Singapore.”