Honda: A difficult race for us 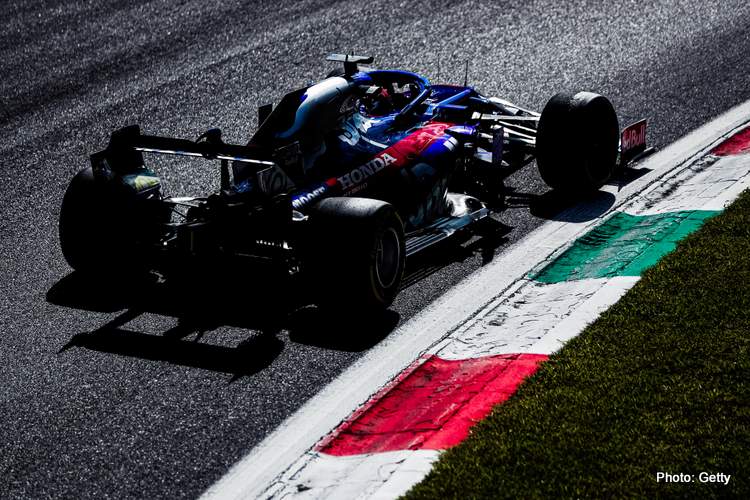 Grid penalties for Max and Pierre – for fitting the Spec 4 power unit this weekend – saw them starting at the back of the grid, while Daniil lined up in 12th place and Alex in eighth. The opening spell of the race saw a number of incidents that hampered three of our four drivers, with Max first picking up front wing damage at Turn 1 on the opening lap and needing to pit immediately for a replacement.

Alex was running seventh and attacking Carlos Sainz for sixth when the pair ran side-by-side through the first Lesmo, with Sainz forcing Alex wide into the gravel on exit. As a result, Alex lost two places and rejoined in ninth position.

As he made progress back through the field he was then handed a five-second time penalty for leaving the track and gaining an advantage, but after pitting on lap 26 Alex recovered to finish sixth. Daniil and Pierre were both in the hunt for points in the opening laps, before a bizarre incident saw Pierre innocently forced off track.

On lap six, Lance Stroll drove back onto the circuit after contact with Sebastian Vettel at the Ascari chicane, but did so right in front of Pierre who was forced into the gravel and did well to keep the car out of the wall, but lost a number of places. With the Virtual Safety Car deployed for a stricken McLaren, Toro Rosso pitted both cars on lap 28, but Daniil was then unfortunately forced to retire the car on track with smoke coming from the back.

At the time of writing, we are waiting for the car to be returned to the garage so that, along with the Toro Rosso engineers, we can identify the nature and location of the fault. Pierre managed to climb back up to 11th place but couldn’t find a way past Lando Norris to take the final point for tenth. After his early issues, Max required a second stop one lap before the Toro Rosso pair came in and then charged through the field to eighth place to pick up four points from 19th on the grid.

Toyoharu Tanabe, Technical Director: “Today’s race was difficult for us, with some unfortunate incidents and a penalty for Albon, who lost some places after the incident with Sainz in the early stages. He did well to make up some places after this and finish sixth. Verstappen started from the back of the grid, having taken the penalties for fitting our Spec 4 PU, but did a good job to fight back after pitting for a new nose early on. Gasly also started from the back of the grid with PU change penalties.

“He moved up a few places, but then, after he was pushed off the track by Stroll, he dropped back down the order and finished just outside the points. As for Kvyat, he had to retire the car at the side of the track and currently, along with the Toro Rosso engineers, we are investigating the exact nature and location of an oil leak. We still acquired plenty of data from running all four cars with our Spec 4 PU for the first time, which will be useful as we prepare for Singapore.”