Featuring a bizarre finish that saw eight of the top ten unable to start their final runs in time, Charles Leclerc’s early Q3 effort was good enough to secure his second pole position in as many weeks at Monza on Saturday.

Taking pole with a time of 1:19.307, Leclerc’s time went surprisingly unchallenged as the battle to secure a tow on the second runs saw all but the Monegasque and McLaren’s Carlos Sainz get their sums wrong and miss setting a time entirely.

Despite the opportunity, Sainz was unable to improve on his initial P7 slot, with Lewis Hamilton and Valtteri Bottas staying P2 and P3, 0.039 and 0.047 seconds behind Leclerc respectively.

Reacting in the immediate aftermath, Toto Wolff said what many were thinking about the chaos.

“That was not even worthy of a junior formula. Everybody looks like idiots.”

Charles Leclerc makes it back-to-back poles for @ScuderiaFerrari as qualifying comes to a chaotic conclusion at Monza#ItalianGP 🇮🇹 #F1 pic.twitter.com/VLytlXLmCz

A fact that had become increasingly apparent throughout the three sessions of practice, the slipstream around Monza was always going to play a major factor in determining Saturday’s pole sitter, it just so happened to be in a different way than anyone expected.

Not wanting to miss out, the teams and drivers engaged in a nine-way game of chicken, with all but Sainz losing sight of the clock in the scramble for position.

Delivering one of the more farcical finishes to a qualifying session in F1 history, the stewards reacted immediately by placing the session under investigation, albeit with it unclear what recourse that can actually be taken.

Drama aside, the result is a big win for Mercedes who have two cars with which to attack Leclerc while his teammate and fastest man in FP3, Sebastian Vettel, could only manage fourth.

The standout driver across all three sessions, Daniel Ricciardo was able to get amongst the Mercs and Ferraris for much of the hour, but had to settle for P5 as the front-runners turned their ‘Party Modes’ up.

Ricciardo’s teammate Nico Hulkenberg was 6th, two tenths behind the Australian and a second ahead of the aforementioned Sainz in seventh.

Alexander Albon was unlucky to finish P8, his first lap ruined courtesy of the day’s other major dose of excitement, as Kimi Raikkonen went off at Parabolica to bring out a red flag in the first stanza of Q3.

Rounding out the top 10 was the Racing Point of Lance Stroll, who was particularly impressive given he lost his slipstream partner when teammate Sergio Perez went out with a stoppage in Q1.

Antonio Giovinazzi was 11th, unlucky to miss Q3 with his time of 1:20.517 just two thousandths of a second slower than teammate Raikkonen’s.

Kevin Magnussen and Daniil Kvyat were also in the mix, but finished P12 and P13 respectively, a little over a tenth separating them from the final shootout.

Lando Norris, who will start Sunday’s race at the back of the grid was 14th, ahead of Pierre Gasly in the second Toro Rosso.

Romain Grosjean was the last to miss the cut in Q1, ahead of the aforementioned Perez and the Williams pair of George Russell and Robert Kubica.

Max Verstappen — already starting from the back regardless — was unable to set a time with a power unit issue. 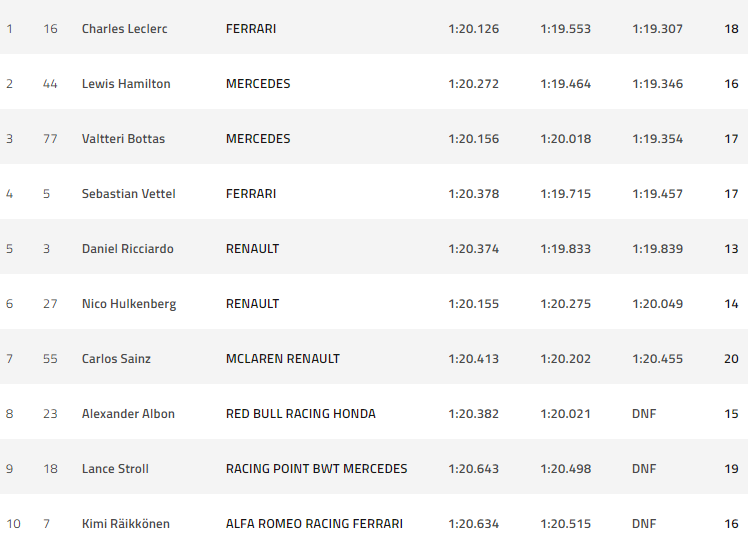