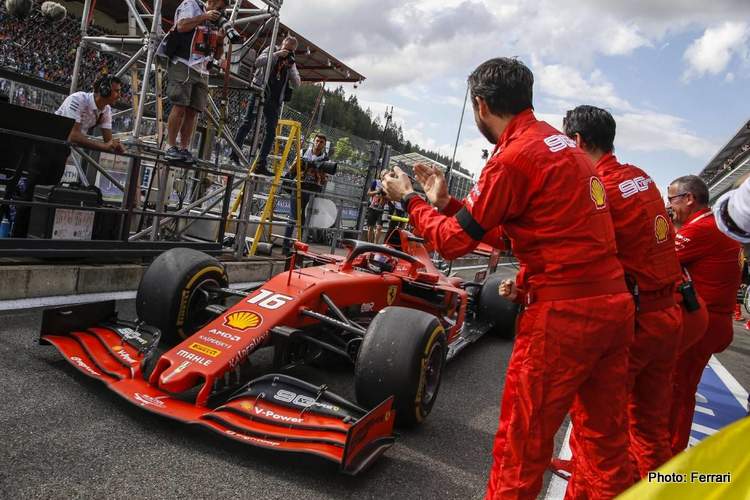 First of all. All of us at MsportXtra, extend our deepest condolences to family and friends of Anthoine Hubert, who sadly lost his life after a horrible accident in de Formula 2 race on Saturday. As with everything, life goes on, and so did the racing on the famous Spa circuit.

From Friday onwards, it was Ferrari who were on top all weekend so here are my thoughts on the Belgian GP.

Did Ferrari find a solution?

Coming out of the summer break, it seemed as Ferrari found the pace again because, at the end of each session, there was a Ferrari on top. It was clear that Leclerc had the upperhand over Vettel and both started the race from the front row with Leclerc in pole-position. It was obvious pretty quick that the race-pace of the Ferrari was nowhere near the qualifying-pace they showed on Saturday and throughout the race, they couldn’t really create a large enough gap. Team orders came to play when Vettel was in front, just to cover off the upcoming Mercedes. Leclerc got ahead and Vettel was deemed to play roadblock, something that didn’t last long. The call to switch was the right one as Leclerc got enough to stay ahead at the finish while Vettel dropped to 4th, getting the fastest lap as a consolation prize. Ferrari had to perform to keep the spirits high but it wasn’t smooth sailing. Next up it’s Monza, another chance to shine for the team in red.

From the get-go, Mercedes was on the backfoot and just couldn’t get the car working as it should. A crash from Hamilton during FP3 understated it and the team did an outstanding job getting the car ready for qualifying. As often the case, it was Hamilton who was the faster one of the two and he started the race from 3rd while Bottas was next to him in 4th. From the moment the lights went out, it was Hamilton who could keep up with the Ferrari boys. Towards the end of the race, Hamilton overtook Vettel for 2nd while Bottas kept running in 4th, easing off a bit to save mileage on his engine and gearbox. With Vettel coming in for a set of soft tyres to go for the fastest lap, meant that Bottas got 3rd on a silver platter.

Lewis and Valtteri score a double #BelgianGP podium for the Team https://t.co/VP9rGi8lg3

A race of two faces for Red Bull

With a new line-up, it would be a weekend of “getting used to”. Albon came in to replace Gasly and on Friday, it was clear that Albon would start from the back, due to multiple new PU elements. For Albon, it was a weekend of learning so he was focused on race set-ups and long runs while Verstappen ran his normal program. Verstappen managed to qualify in 5th so opportunities were there on Sunday. The race started and after turn 1, there was just 1 RedBull car left to race as Verstappen was on the inside going into turn 1 and found himself in a familiar situation with Raikkonen on the outside and contact was made. The stewards decided it was a racing incident but Verstappen’s race was over on top of Raidillon as his steering was broken and he went into the wall. Meanwhile, Albon stayed clear of all the trouble and laid down an awesome race, coming from 17th on the grid to finish 5th, in the process, showing some great overtakings. Monza this week would be another tough one and with chances of Verstappen getting the upgraded spec-4 Honda engine, he’ll be the one starting from the back.

That’s a tough one but I tend to go with McLaren’s Norris, although he sadly didn’t make the finish with just 1 lap to go. He was very smart at the start and stayed out of trouble at turn 1 which meant he found himself in 5th position and looked set for his best finish so far. With 1 lap to go, the engine gave the ghost and that was it. On a side note, I want to mention Kvyat, who also had an awesome race, starting from last on the grid to finish 7th and both Racing Point boys Perez and Stroll, who also had a good race.

“We have to put this behind us and look forward to Monza.”

Besides Albon’s race, I was surprised about the difference between the qualifying pace and race pace of both Ferrari drivers. I really wished they just had 1 engine per weekend where they had to do all sessions with. No more “party-mode” thingie. Just jump in and give it your all. Maybe then, the differences between a number of teams are less big as they are now. Pretty sure engine manufacturers produce more than enough engines already to test on the dyno, just to finally get the right one to actually use as a race engine. Why not use all these engines during race weekends. Drop an old one in on Friday for FP1 and 2 and drop a new one in on Saturday for FP3, Quali and Sunday’s race. After the race, that engine can only be used on the Friday of the next race weekend and a new one gets fitted the day after. Looking at the costs to produce the number of “test-engines”, to me, it doesn’t make much difference to use them on track instead of the dyno. If it goes POOF during the race, so be it. Brings a bit of extra excitement back, but hey, what do I know.

I have to go with the Renault team. Ricciardo showed signs of improvements at the start of the weekend but during the race, either due to just not having enough power or wrong strategic calls, he went backwards. Hulkenberg did a bit better by finishing in 8th, although it needs to be added that Giovinazzi and Norris dropped out at the end plus Gasly and Stroll were on different strategies. Ricciardo went backwards so fast that he finished down in 14th. Hopefully, they can quickly turn things around and start scoring solid points. Hulkenberg has 8 races left to showcase himself as he will be replaced in 2020 by Ocon. Ricciardo is getting paid the big bucks and he also wants to show why he is getting that. Now it’s up to the team to deliver both drivers with a good car that can fight for higher positions. I also feel that Haas was a close second in this question as they struggled all weekend and were pretty much invisible.

“We need to reflect and then turn our thoughts to Monza where we hope our pace can be equally decent but rewarded with more points.”
Cyril Abiteboul – #BelgianGP, Sunday
Full report https://t.co/gzQ8A7VvWw#RSspirit pic.twitter.com/u28Xdoq5zY

Understandably, the passing of Anthoine Hubert took over the weekend on social media. Not just amongst the F1 community but throughout motorsport in general. Indycar, WEC, F1, F2, F3 and many other categories that were racing last weekend, mentioned it with much respect.

With a back to back weekend, focus is shifting towards Monza, the temple of speed. As life goes on, we have to put the whole Spa weekend behind us and move on towards race 13 of this season. Timetable and more are already up on the #MsportXtra Weekend Outlook

A new week brings new chances. It’s another #RACEWEEK !! This time with @F1 @FIA_F2 @FIAFormula3 and @WorldSBK . Timetables and more on https://t.co/PTXuV86Ylx !! #MsportXtra