Leclerc: I dedicate this win to Anthoine 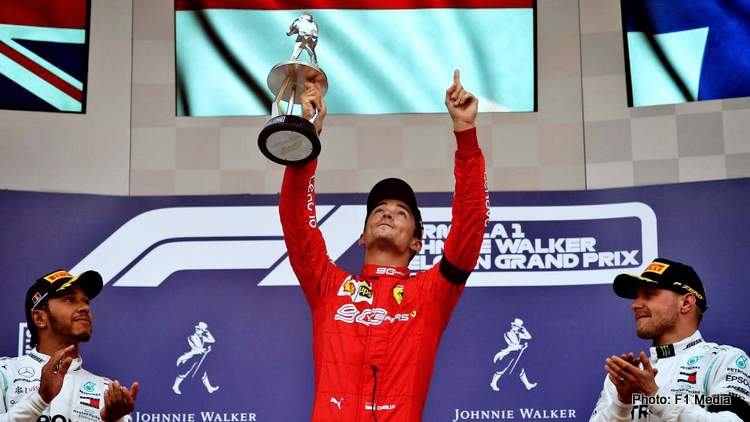 It was as if preordained that Charles Leclerc would win the Belgian Grand Prix – his first victory in Formula 1 and the first of the season for Ferrari – the day after the death of karting rival and friend Anthoine Hubert – on a mournful Sunday at Spa Francorchamps.

Leclerc finally did what he has threatened to do on more than one occasion this season – win a Grand Prix! And he did so emphatically with a masterful drive that rendered his five-time F1 World Champion teammate Sebastian Vettel to the role wingman.

With fast degrading tyres on his SF90, he fended off a fast and furious charge by Mercedes driver Lewis Hamilton to claim a famous first victory by less than a second and, in doing so, becoming the first driver since the great Michael Schumacher to score his maiden F1 win at the legendary venue.

After his victory, a solemn Leclerc said in parc ferme, “On the one hand, I have a dream since I was a child that has been realised, and on the other hand, it has been a very difficult weekend since yesterday.

“We have lost a friend first of all, and it’s very difficult in these situations so I would like to dedicate this win to him. We have grown up together and my first ever race I did when I was seven with Anthoine, so it’s such a shame what happened yesterday. I can’t fully enjoy my first victory but it is a memory that will live with me forever.

Leclerc was fabulous in qualifying, tearing around the daunting venue three-quarters of a second faster than any of his rivals on Saturday to claim his third career pole position.

As for his race, which he led from start to finish and always looked in control, Leclerc said, “It was a difficult race and we were struggling with the tyres towards the end. I’m a lot happier than what I managed in Budapest from my side.

“I managed the tyres better, so it’s a good weekend performance-wise with pole position and my first victory, so for that I’m quite satisfied,” added the Ferrari driver.

The victory does not alter the standings much as he remains fifth in the championship, now twelve points shy of teammate Sebastian Vettel in fourth and 111 points down on Hamilton at the top of the table.

Nevertheless, Leclerc’s was a very popular triumph that Ferrari and F1 desperately needed. It was the best that could really emerged from a truly sombre day for the sport across the globe.