Haas: We got overtaken by everybody 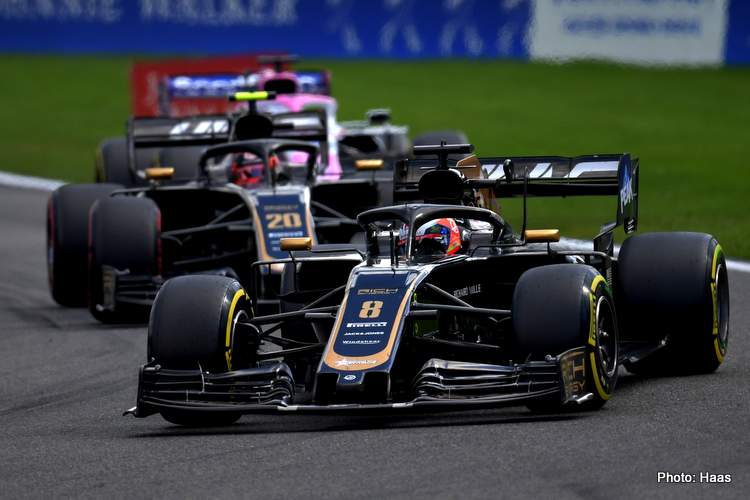 Both Magnussen, who started eighth, and Grosjean, who started ninth, took the green flag for the 44-lap race around the 7.004-kilometer (4.352-mile), 19-turn circuit on Pirelli P Zero Red soft tires and were able to thread their way through an opening-lap incident and the mayhem that ensued to emerge with Grosjean in sixth and Magnussen in seventh.

They held position through the first nine laps before Magnussen began struggling to defend. He dropped to 10th over the next three laps as Racing Point’s Sergio Perez and Lance Stroll and the Toro Rosso of Pierre Gasly were able to slip past.

Meanwhile, Grosjean held firm to his sixth position until he pitted for a set of medium rubber on lap 17, eventually settling into 10th place over the middle stages of the race.

Magnussen was in 15th when he finally pitted for his set of medium tires on lap 26 and resumed in 18th behind a pair of competitors ahead of him who had yet to pit.

From there, the Haas F1 Team duo did their best to manage their racecars and tire wear to the finish, Magnussen crossing the line 12th and Grosjean 13th.

With today’s results, Rich Energy Haas F1 Team remained ninth in the constructor’s championship with 26 points, six behind eighth-place Alfa Romeo and 25 ahead of 10th-place Williams.

Scuderia Ferrari driver Charles Leclerc, who dominated throughout practice and qualifying this weekend, scored his first career victory from the pole in today’s Belgian Grand Prix, becoming the 108th different driver to win a Formula One event.

He took the checkered flag .981 of a second ahead of runner-up Lewis Hamilton of Mercedes, with Valtteri Bottas following home his teammate for the third and final podium position.

Eight races remain on the 2019 Formula One schedule, beginning with next weekend’s Italian Grand Prix Sept. 6 to 8 at Autodromo Nazionale Monza.

Romain Grosjean, 13th: “We had a great start, the car was performing very well at the beginning of the race. I was really happy with the car pulling out a gap. Then we put the medium on and to my surprise the car was even better. So, I was hoping it was going to be a really good afternoon.

“Then we went behind the Renault of Ricciardo. He was fighting as hard as he could, and we just had no chance to pass him. We obviously had too much drag and not enough top speed. It’s not a choice, or an option we had just to get the tires to work, but it’s so hard.

“I was happy with my driving style and the car, you’re constantly fighting, but it’s so hard to take having been in P6 to then go to P13. It’s a tough feeling not being able to do anything.”

Kevin Magnussen, 12th: “The first stint on the C3 tires felt terrible, there was absolutely no grip and we were just falling down and getting overtaken all the time. I actually made the wrong call to stay out a bit longer on that tire, that was so bad because I felt it was hopeless, so we might as well just wait for a safety car or something like that.

“I felt that was my only chance to come back. Then when we eventually did pit for the C2 yellow tire, the car just came alive and completely back to normal and felt very good again. It’s so unpredictable and you don’t know what to expect.”

Guenther Steiner, Team Principal: “Obviously, a disappointing result at the end – to finish where we were. Romain just couldn’t get past Ricciardo at the right time because we’re lacking top speed. We got overtaken by everybody.

“We were stuck behind Ricciardo, who was going slow, and we could not defend from the people going past us, and we couldn’t attack. Almost the only place to pass, at turn five, you need top speed coming from the straight, and that was our problem today.

“Otherwise, the car was performing, but it wasn’t good enough obviously on top speed. We still have work to do. I think we can get close to what we need to do, we just have to keep on working. Everybody did a good job and we just have to try to keep on fighting. That’s what we’ll do.”