Ferrari: A victory that gives us plenty of energy and desire 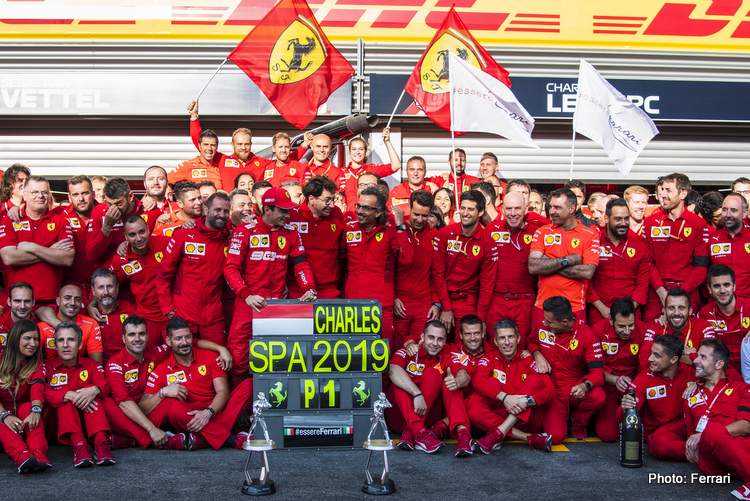 Scuderia Ferrari has taken its first official win of the season, thanks to a great performance from Charles Leclerc at the legendary Spa-Francorchamps circuit.

The Monegasque managed the 44 lap race to perfection, on his way to his maiden F1 win, the first also for a driver from Monaco. This fantastic result came at the end of what was a very difficult weekend for the world of motorsport, following the tragic death in Saturday’s Formula 2 race of young French driver Anthoine Hubert.

The race. Charles got away well from pole position to keep the lead. Behind him, Sebastian Vettel was overtaken at the first corner by Lewis Hamilton but retook the place getting by again at the end of the Kemmel straight.

Shortly after, the Safety Car appeared after Max Verstappen went off and then Carlos Sainz did the same. At the restart, Charles managed to pull away from the group, running at a consistent pace. Sebastian pitted on lap 15 to switch from Soft to Medium, while his team-mate stayed out for a further 5 laps.

Sebastian. On new tyres, Vettel put in a run of very quick laps which saw him take the lead when Leclerc and the two Mercedes pitted. However, the German’s tyres were degrading quickly and his pace dropped off and on lap 27 he let his team-mate through into the lead.

Then Hamilton closed in and he and Sebastian had a good duel for three laps. Once he had lost the place, the team changed his strategy, bringing him in for another set of Softs to run for the final ten laps of the race. Sebastian finished fourth, behind Charles and the Mercedes duo and, making the most of his new tyres, brought home the extra point that goes with setting the fastest lap.

Final stages. The final ten laps were nail-biting, as Charles managed his tyre degradation and fought off a hard-charging Hamilton, who never got quite close enough to use the DRS. Charles took the flag less than a second ahead of the reigning world champion and a further 12 ahead of Valtteri Bottas.

This was Scuderia Ferrari’s 236th win, while Leclerc set two new records here in Belgium, becoming the youngest driver to take pole and the win at Spa-Francorchamps. He is also the youngest ever driver to win a Grand Prix at the wheel of a Ferrari. The world championship is back on track right from next week in Monza for the Italian Grand Prix.

Charles Leclerc: “It is difficult to enjoy a first victory on a weekend like this. I grew up with Anthoine, and we competed in our first karting race together with Pierre (Gasly) and Esteban (Ocon) in 2005. These are memories I will keep forever.

“Losing him yesterday was a huge shock, not only to me but to everyone in motorsport. In a way, I am satisfied having won today to remember him in the way he should be remembered. He was a champion, and this victory is for him.

“The race itself was good and nothing would have been possible without the amazing car the team gave me. We made good improvements in terms of race pace and tyre management this weekend.

“The last few laps weren’t easy. I saw Lewis coming closer and closer in the mirror, so I put my head down and tried to focus on the work I had to do in the car. At the end, I managed to cross the line in first place and I’d like to thank the team for the hard work they have put in to make this possible.”

Sebastian Vettel: “It was not by any means an easy race for me. At the start I managed to retake my position from Lewis but then I began to struggle with the tyres and I had to stop earlier than planned. With the medium tyres at first I managed to maintain a good pace, but then it dropped again.

“I tried to keep second place but I couldn’t do it and at that point, the best thing to do was to pit once more for tyres and carry on without struggling so much.

“So congratulations to all the guys in the team and well done to Charles for his first win!.”

Mattia Binotto Team Principal: “This is a victory that certainly gives us plenty of energy and desire to do well. After the summer break, it was very important for us to return to the track-focused and to show we are competitive after a start to the season in which we lost so many opportunities.

“Compliments to Charles, who sealed his very first victory in Formula 1, and it was important to do it here not least because he and Anthoine were close friends. This is the best way to remember him. His weekend was outstanding from Friday and he truly deserved this win.

“Seb also put together a good race and he showed strong pace in the first stint, but we brought forward his pit stop to protect his position. This meant his tyres had degraded a lot towards the end of the race. He helped his team-mate and he showed yet again that he is willing to work for the good of the team.

“Now we head to Monza, we are raring to go and we want to perform just as well at our home race.”