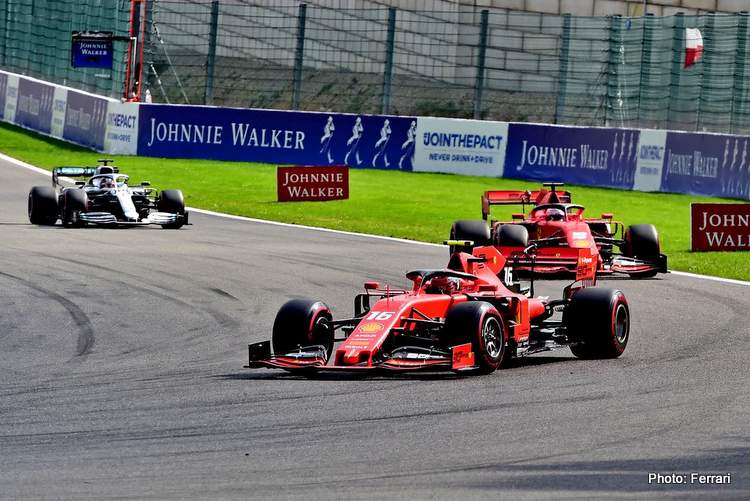 Charles Leclerc won his first Formula 1 race on Sunday when he triumphed at a sombre Belgian Grand Prix, Round 13 of the 2019 Formula 1 World Championship, at Spa-Francorchamps. 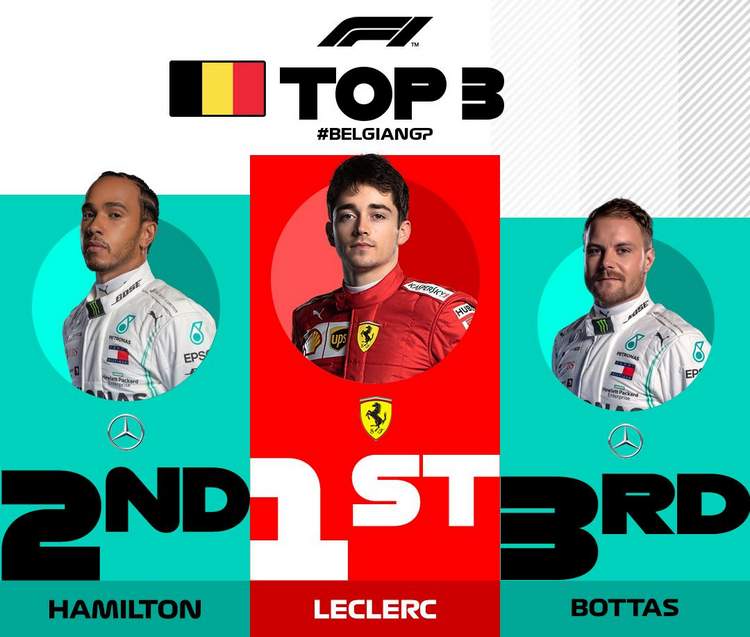 The Ferrari driver made no mistake whatsoever as he powered to a lights-to-flag victory on a dark weekend for motorsport at Spa-Francorchamps, a day after his friend since the karting days – Anthoine Hubert – perished in a horrific Formula 2 race accident a day earlier.

It was popular and well-deserved victory for the 21-year-old who has come close on a few occasions this season, but on the day at the sport’s most daunting venue, he opened his account and joined the greats of our sport as a Grand Prix winner.

It was a day of many firsts for Leclerc, among them: the first of many wins one would be safe to predict, the first one of the year for Ferrari, the first since Kimi Raikkonen won for the Reds in the USA last year and the first driver to score a maiden F1 win at Spa since Michael Schumacher.

He declared over the team radio as he crossed the line: “My first victory in F1, this one is for Anthoine. It feels good but it’s difficult to enjoy a weekend like this.”

Behind winner Leclerc, Lewis Hamilton chased hard all day and came desperately close as a last-lap showdown loomed but the Ferrari driver had it covered, but it was breathtaking stuff until they crossed the finish line sending the fans into euphoria.

A dream came true for the kid from Monaco who said afterwards, “It was a difficult race and we were struggling with the tyres towards the end. I’m a lot happier than what I managed in Budapest from my side. I managed the tyres better, so it’s a good weekend performance-wise with pole position and my first victory, so for that I’m quite satisfied.”

“On the one hand, I have a dream since I was a child that has been realised, and on the other hand, it has been a very difficult weekend since yesterday. We have lost a friend first of all, and it’s very difficult in these situations so I would like to dedicate this win to him.

“We have grown up together and my first ever race I did when I was seven with Anthoine, so it’s such a shame what happened yesterday.  I can’t fully enjoy my first victory but it is a memory that will live with me forever,” added Leclerc.

As close as it was, on the weekend Mercedes simply lacked the firepower for the long Kemmel straight which Ferrari thrived on with a clear horsepower advantage in their PU package. But it was a riveting chase from the World Champion who knows not when to give up.

Hamilton reflected afterwards, “I gave it absolutely everything. We had a great crowd today – I think more people than we’ve ever had here.  It was a difficult race today and I think the Ferraris were just too fast on the straights and it was very hard to keep up with them.

“Forty-four is normally my lucky number but maybe we needed a few more laps today. Congratulations to Charles, it’s his first win and it’s been coming all year so I’m really happy for him.”

Although he never put a foot wrong, again Valtteri Bottas could not match his teammate in full flight but did enough to claim third and relegate Sebastian Vettel to fourth from second on the grid.

Bottas said, “The race pace felt OK, just as were expecting, but Ferrari were ahead from the beginning and they were strong on the straights. There was no chance for me but I was trying as hard as I could. We took the advantage of saving the engine and the gearbox in the end for the next few races.”

Vettel who appeared to be Ferrari’s wingman in this race, even obliging teammate Leclerc with a free pass for the lead but a two-stop strategy was not his friend. But he did set the fastest lap when he got his second set of tyres.

While luckless Lando Norris was voted Driver of the Day, these eyes saw Alex Albon going a better job with deserved reward. The Red Bull rookie, in his first race for the team finished fifth after starting 17th!

He made a statement with an emphatic performance, his tango and then overtake on Renault’s Daniel Ricciardo was memorable as was his overtake on Sergio Perez a little later.

If the Blues wanted a fighter in the car next to Max Verstappen, they appear to have found him in Albon.

On the other hand, it was heartbreak for Norris who looked set for a well-worked fifth-place finish but was forced to retire on the final lap of the 44-lap race, compounding the misery for McLaren whose Sainz also had a DNF to his name.

As for Verstappen… the Dutchman elicited a massive groan probably heard all the way to Brussels as he crashed when diving into La Source hairpin, on the opening lap, spearing into Kimi Raikkonen. The resultant suspension damage, done to the Red Bull front-end, forced him to park the stricken car at the top of Eau Rouge.

Raikkonen continued but was way out of contention on a miserable day for Alfa Romeo as Antonio Giovinazzi crashed with the finish in sight.

Sergio Perez again proved that in races of attrition he has few peers to finish sixth on a double points-scoring day for Racing Point with Lance Stroll in tenth.

Apart from the one car in the wall, Honda had three in the points with Toro Rosso duo Daniil Kvyat seventh and Pierre Gasly ninth on his return to the Red Bull junior team.

Leclerc’s victory was scored from the second pole position of his career and the Monegasque driver kept his advantage at the race start to lead ahead of Vettel, Hamilton and Bottas.

There was drama behind the leaders through, with Verstappen’s race-ending within moments of the red lights going out to signal the start. The Dutchman’s start from P5 on the grid was not ideal and he was immediately passed by a number of cars.

Verstappen responded by taking a tight line down the inside into the La Source hairpin. As he approached the corner, though, he hit Räikkönen’s Alfa Romeo pitching the Finn into the air.

Verstappen’s car was also damaged in the incident and though the Red Bull driver attempted to carry on, his suspension broke as he exited Eau Rouge and he crashed out of the race.

The incident brought out the safety car and as the field formed up behind the course car, Leclerc led ahead of Vettel with Hamilton third ahead of Bottas and Norris who had profited from the turn one incident to climb from 11th on the grid.

Vettel was the first of the frontrunners to pit, with the German taking on medium tyres on lap 15. He rejoined in fifth place and was soon setting purple times as the new front three of Leclerc, Hamilton and Bottas continued to circulate.

Race leader Leclerc made his sole stop on lap 21, but he rejoined behind team-mate Vettel and after Hamilton and Bottas had made their visits to pit lane, the German emerged as the new race leader, two seconds clear of the younger Ferrari driver.

Vettel’s lead didn’t last long, however. Leclerc quickly closed the gap and on lap 25 Vettel was told to let his team-mate past. At the start of the next tour he obliged, drifting off the racing line on the run down to Eau Rouge to let his young team-mate re-take the lead.

The German then came under heavy pressure from Hamilton. He defended well for a number of laps but on lap 31 he Hamilton got close enough and passed

Further back, new Red Bull recruit Albon began to make moves forward after his sole pits to swap opening medium tyres for new softs. The Thai driver, who has started from 17th on the grid emerged in P15 began to power through the pack.

On lap 30 he moved into the points when he passed Gasly with a good move into Les Combes and he then made a good move down the inside of Ricciardo on the run towards Pouhon to claim eighth place on lap 33.

Kvyat was the next target and on lap 38 Albon powered past the Russian on the run down the Kemmel Straight.

He now set off in pursuit of sixth-placed Perez, though the Mexican driver was nine seconds up the road. That was no deterrent, however, and by lap 42 he had reduced the deficit to the Racing Point to just two seconds.

And in a frenetic final two laps, the Red Bull driver continued his rise. At the start of lap 44, Norris, who had been running fifth stopped just beyond the start-finish straight and then with pace in hand Albon made his move on

Perez on the long run to Les Combes. It was a brave one too, with the new recruit putting a wheel into the dirt on the right side of the track as the Mexican tried to defend.

There was no denying the Red Bull’s pace, however, and as Leclerc crossed the line to take his first grand prix victory ahead of Hamilton, Bottas and Vettel, Albon powered towards his best ever F1 finish.

Behind the Red Bull, Perez clung on to sixth ahead of Kvyat and Hulkenberg took eighth place ahead of Gasly. The final point on offer went to Stroll. 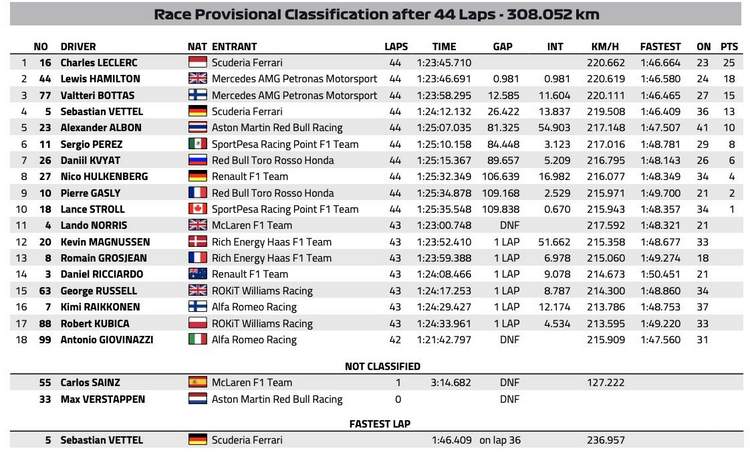 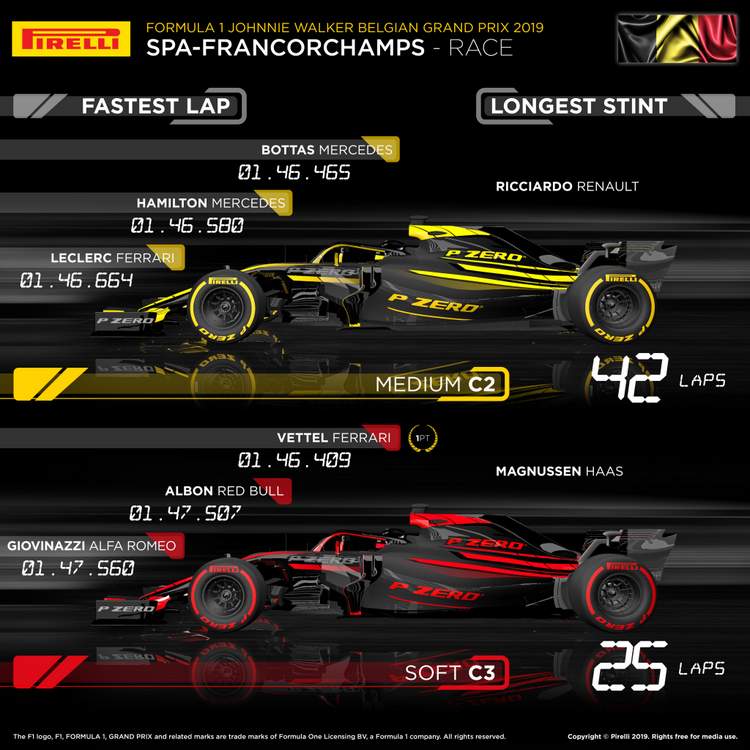 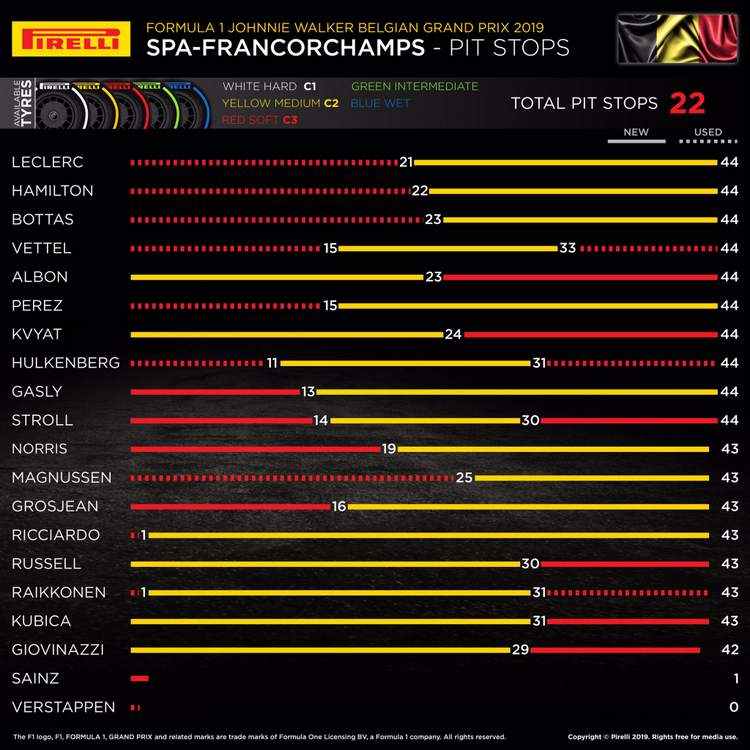 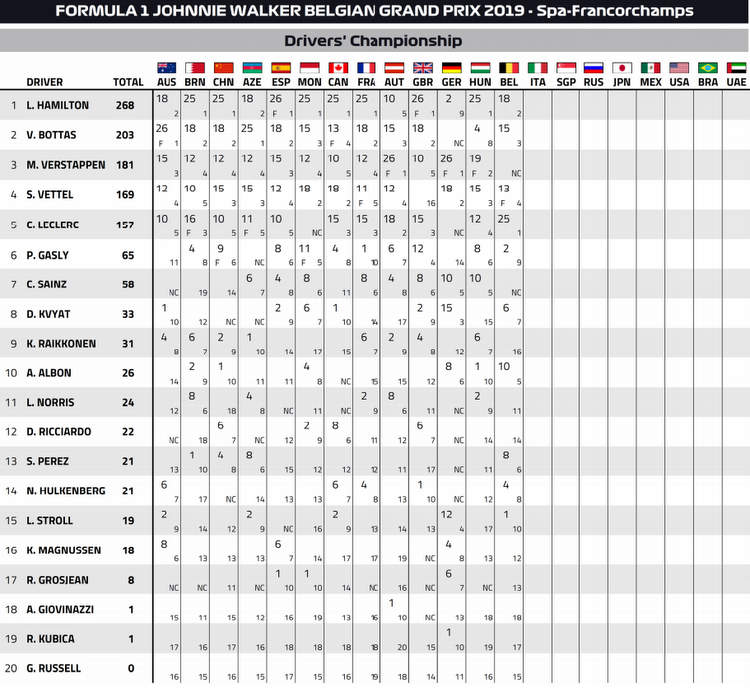 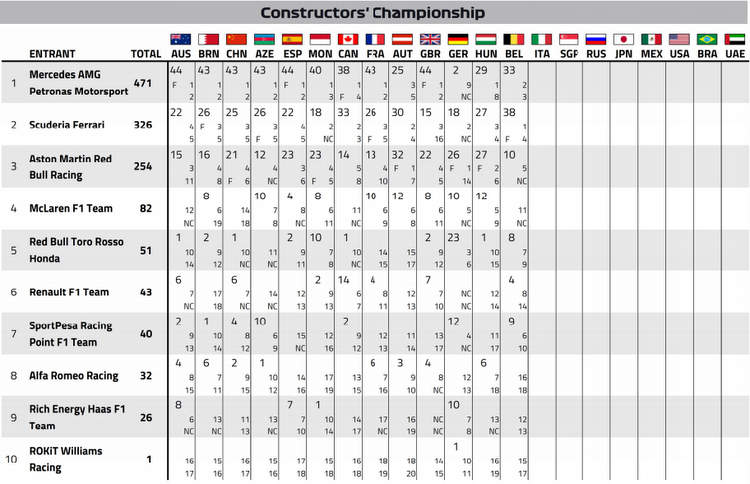