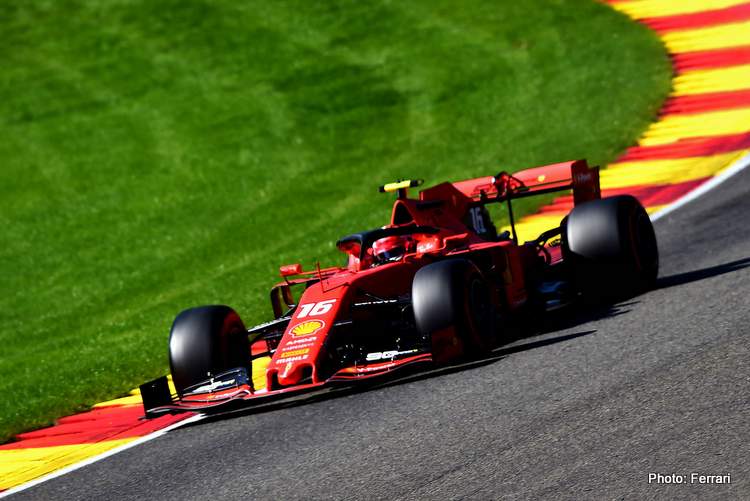 The first Friday following the summer break went off smoothly for Scuderia Ferrari, as the team got through its planned programme over the course of free practice for the Belgian Grand Prix, the thirteenth round of the season.

Charles Leclerc and Sebastian Vettel completed 98 laps between them over the three hours of track time and were quickest in both sessions. However, lap times don’t mean much until tomorrow afternoon when it’s time for qualifying.

FP1. Sebastian and Charles did 20 laps each, starting on the Soft tyre. They both worked on set-up before tackling some runs aimed at evaluating performance. The first to set a significant time was Leclerc with a 1’44”788. Shortly after, Sebastian posted a 1’44”574, which turned out to be the best of the session, with his team-mate second.

FP2. In the afternoon, the two Scuderia Ferrari drivers got back to work, running the Medium tyres to complete an evaluation of the compounds brought here by Pirelli, before going back to the Softs for a qualifying simulation. Charles did a 1’44”123, which turned out to be the quickest of the day. Sebastian was next up with a 1’44”753. The Monegasque and the German then began working on race preparation with the usual long runs, on different fuel loads.

Charles Leclerc: “It was quite a good first day for us after the holidays. I really like this circuit and enjoy driving here. The track is quite long, has all types of corners and there’s a very unique flow to it. Despite our good positions in free practice, we do have to stay realistic and expect our rivals to be very competitive tomorrow.

“Our qualifying pace was strong today, but we still have some work ahead of us in improving it over the long runs. If we are quick on the straights, we will hopefully have some good opportunities for overtaking on Sunday, which is a positive. The last few Grands Prix have been great, with a lot of battles, so I hope that this race will be another exciting one.”

Sebastian Vettel: “It was a positive day and it’s great to be back in the car, especially at a track like this. The feeling from the cockpit was good, but I think there is still room for improvement. Let’s not forget it’s only Friday and it will only get serious tomorrow afternoon and then Sunday when it matters.

“On a quick lap, the performance was okay, but the race is not just one lap and so we have to work on improving our race pace, especially in the second sector. In today’s two sessions, we were sliding a bit too much in the middle sector and so for the race it will be important to optimise the tyre behaviour. We still have work to do tomorrow.”