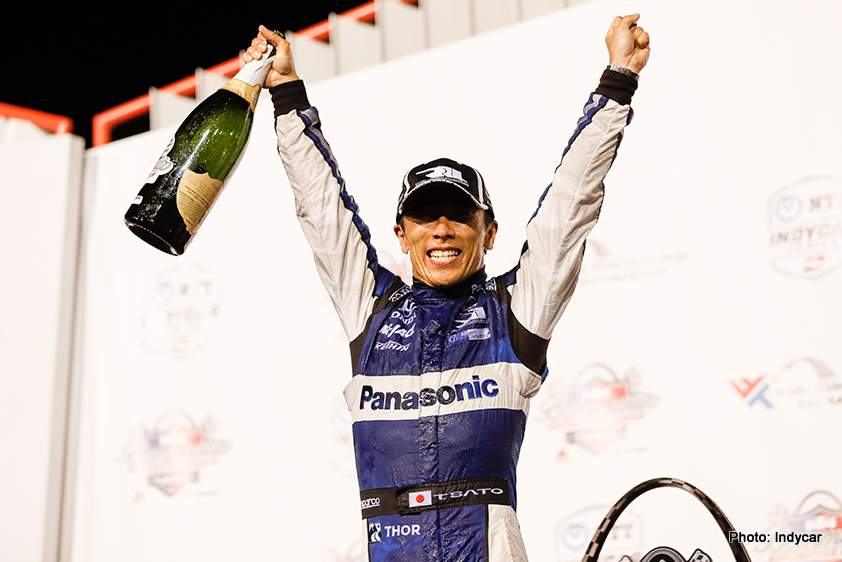 Midway through Saturday night’s race, news of Andrew Luck’s sudden retirement swept through the pits. At 29, the Indianapolis Colts’ quarterback left the sport that made him rich and famous but also left him in chronic pain.

When told the news after finishing third in the NTT IndyCar Series’ Bommarito Automotive Group 500 at World Wide Technology Raceway, 44-year-old Tony Kanaan rebounded from his astonishment by cracking a joke. “You won’t be seeing that from me anytime soon,” he said with a laugh.

As three “old-timers” finished on the podium in this short-oval shootout, the lesson of the race became clear: Race deep into your 40s, kid. You’ve still got it.

Sato, the 42-year-old veteran who’d been accused of causing a crash the previous weekend at Pocono Raceway — and vigorously defended by his team — outlasted 38-year-old Ed Carpenter and Kanaan for a surprising 1-2-3 finish that spoke of redemption, experience and the unpredictability of auto racing.

“That’s the beauty of this sport, with motor racing,” Sato said. “If you’re talking only in physical terms, (older drivers) might not be able to do that. With the combination of experience and the team behind it, all the racecraft and all the things, I think age is sometimes something, but it is not everything. I think we can still perform like this.”

Sato beat Carpenter to the finish line by just 0.0399 seconds for what he called his most significant win since the 2017 Indianapolis 500. It also was the best finish for Carpenter since his runner-up effort in the 2018 Indy 500 and Kanaan’s best since finishing second at Texas Motor Speedway in June 2017.

The celebration quickly turned into a three-old-guys-on-a-podium comedy routine. During the post-race champagne spray, Kanaan remarked that all three drivers were in their 40s. Carpenter, the kid of the bunch, took faux offense.

For Sato, the victory was a reiteration of his defense after a first-lap crash Aug. 18 at Pocono that seriously damaged the championship hopes of Alexander Rossi and sent Felix Rosenqvist to a hospital for a precautionary evaluation. Sato’s team, Rahal Letterman Lanigan Racing, issued a mid-week statement using data from telemetry and in-car cameras to defend its driver.

“I don’t need to say anything,” Sato said. “Eventually it will come back very strong here with the support of the team. The team needed that statement to be done because so much information was wrong. That’s why they backed me up. I really appreciate it.”

Sato took the lead on Lap 188 of the 248-lap race and held it to the finish despite fierce challenges from Carpenter and Kanaan after a restart on Lap 204. As Sato and Carpenter approached the finish line on the final lap, Carpenter pulled alongside but couldn’t get the nose of his car past Sato’s.

“It was close, yes,” Sato said. “For me, everything was under control. If he passed me, that’s it, that’s racing. He had a great moment. That’s fine, but I crossed the line ahead of him.”

Heading to Portland, Newgarden leads Pagenaud by 38 points, with Rossi third, 46 off the lead, and Scott Dixon fourth, 70 behind. Realistically, those are the drivers who will settle this championship.

“I don’t think we can feel too confident or secure where we’re at,” Newgarden said. “I really don’t. I think we’re in a good spot, without a doubt. It would be silly to not recognize it’s a good position. It’s not something that you can just sit back and rest on. It’s going to be tough the last two rounds. … I think we’re in a good position, but we can’t do anything different than what we’ve been doing all year. We have to keep sort of attacking with some caution.”

As the post-race press conference transitioned from Carpenter to 28-year-old Newgarden, who drove for Carpenter’s team in 2015 and 2016, the subject of age led to playful banter.

“Thanks, Dad,” Newgarden joked.
“Thanks, son,” Carpenter responded.
“It’s past your bedtime, son,” Heather, Carpenter’s wife, joined in from the back of the room.

Time, it seems, has been good to some of the racing’s oldest competitors. 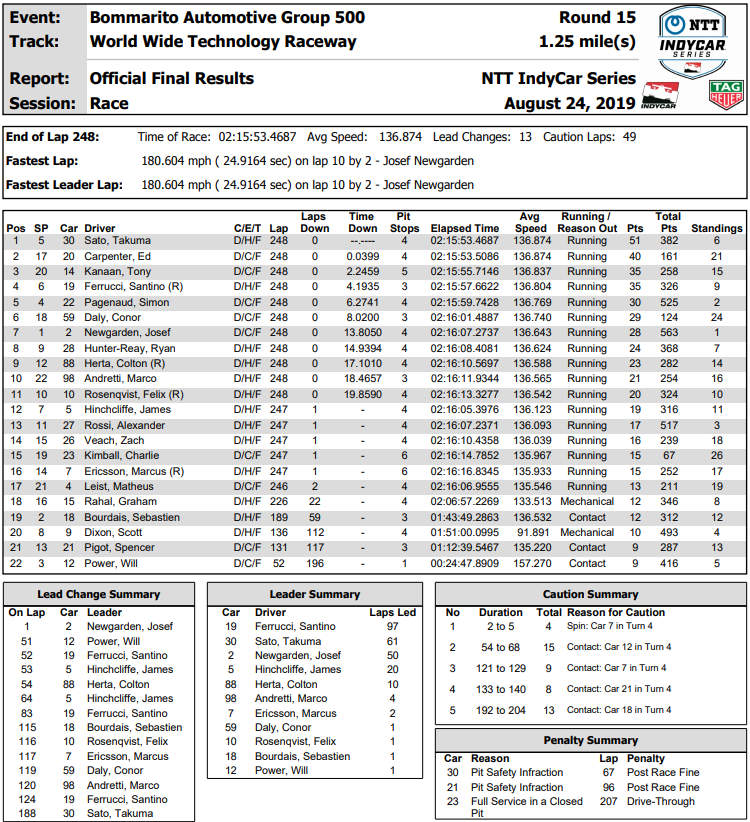