Rahal Team: Data shows Sato did not turn into Rossi 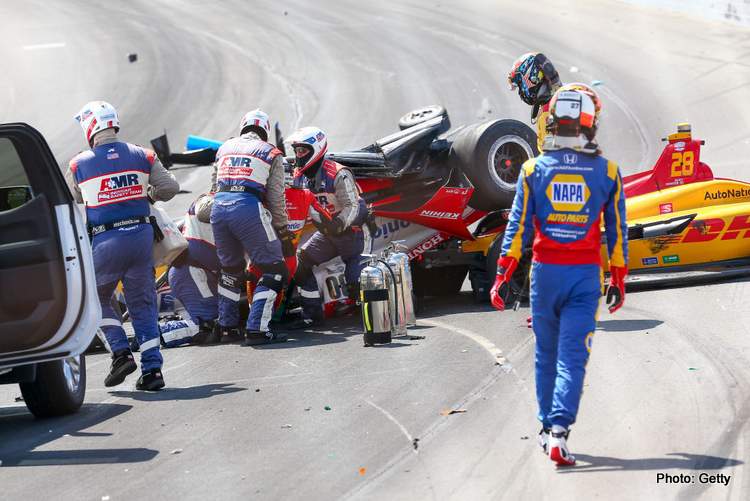 Rahal Letterman Lanigan Racing did an internal review of the opening-lap crash at Pocono Raceway and absolved driver Takuma Sato of causing the scary accident that marred the afternoon of Indycar racing at the tri-oval.

Sato was racing three-wide with Ryan Hunter-Reay and Alexander Rossi when they crashed headed into the second turn.

Rossi is second in the championship standings, but now trails leader Josef Newgarden by 35 points with three races remaining.

RLL said “the data and video clearly shows that Takuma did not turn down the track into Alexander in this incident and in fact the first steering wheel movement made by Takuma was to the right, as he tried to correct his car after the initial contact.”

The team called the incident “part and parcel” of oval racing, particularly with track position so vital.

“It’s a racing incident and we as a team wish to publicly state that we stand behind our drivers and have absolute faith in their ability to race and perform at the highest level for RLL,” the statement said. “This was a racing incident which unfortunately may have some championship implications.”

RLL then noted that Graham Rahal was second in the championship standings until a crash at Pocono in 2015 derailed his title hopes, “so we know the frustration drivers and teams experienced.”

Both Sato and Pocono Raceway itself have faced heavy criticism since the Sunday accident. Felix Rosenqvist was taken to a hospital with a headache and back pain after his car sailed into the fence, and Sato’s car landed on top of Hunter-Reay.

Most drivers blamed Sato for the contact that triggered the crash, but others focused on debatable compatibility between IndyCar and the Pennsylvania 2.5-mile oval.

Justin Wilson was killed when a piece of debris from another car hit him in the head in 2015, and Robert Wickens last year suffered a spinal cord injury when his car went into the fence.

I feel I need to say a word. I’m sorry I was involved with @AlexanderRossi for the championship. Looks like he was squeezed both Ryan and I, and if you reference seams, Alex clearly moved up. We all racing very close and unfortunately we made contact. pic.twitter.com/falLL7tf49

I didn’t mean I was blaming Alex at all. I just said the facts and I apologized for the situation on my previous tweet. Now I show you this as well that I just drove straight. pic.twitter.com/Md0U71S8y1

Big Question: Is Pocono too dangerous for Indycar?