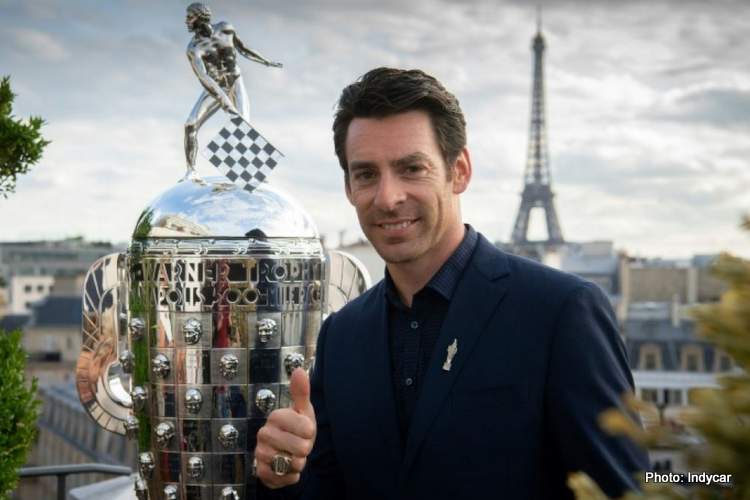 Simon Pagenuad became the first Indianapolis 500 winner to unveil his likeness on the iconic trophy outside the United States when he did so in Paris yesterday.

Pagenaud celebrated his Indianapolis victory Monday by displaying the BorgWarner Trophy at a ceremony along the Champs Elysees. Pagenaud is the first Frenchman to win Indy since Gaston Chevrolet in 1920 and fifth overall — an accomplishment the 2016 IndyCar champion is savoring.

“This oval racing is definitely not something that we (in France) even try as kids driving go-karts,” Pagenaud told The Associated Press. “It just isn’t a discipline we ever learn. So being able to come to America as a Frenchman, and no offense, but to beat the Americans, was very special to me and special for everybody in France.”

Pagenaud has also been to the White House with his Team Penske team since winning at Indy in May. But this week’s visit — which began Sunday in Budapest, where Pagenaud was a guest at Formula One’s Hungarian Grand Prix — is unique in that he has the treasured BorgWarner Trophy along for the journey.

The BorgWarner had never even been out of the United States until 2017 winner Takuma Sato was able to bring the trophy on a tour of Japan. The actual unveiling with the latest winner’s face is typically done in Detroit in the spring.

Pagenaud is the 106th face on the 110-pound sterling silver trophy. BorgWarner commissioned the racing award in 1935. The first driver awarded was Louis Meyer, who in 1936 was presented with the trophy featuring the previous 24 winner’s faces.

Pagenaud was sculpted by William Behrends in a process that created a three-dimensional bas-relief sculpture of the winner. Behrends has been sculpting the winner since 1990.

“The face is just incredibly accurate, with a little bit more wrinkles than expected, but that’s time,” Pagenaud said. “It won’t age anymore, I guess.”