Hamilton: [Red Bull] have a winning seat for Alonso… 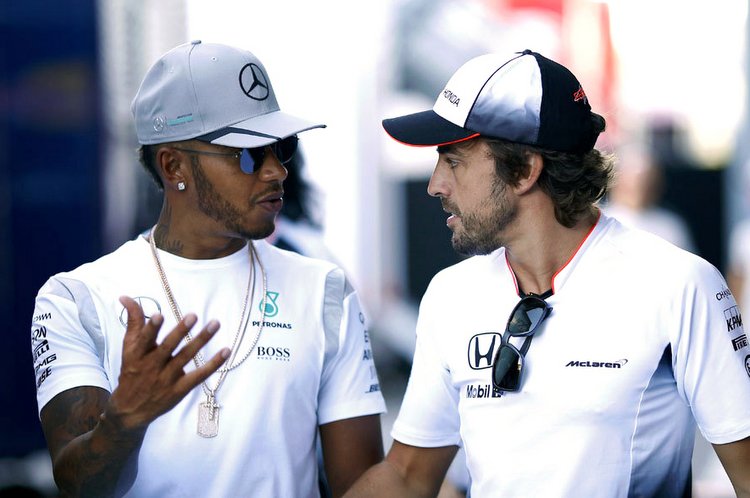 Double F1 world champion Alonso, 38, left the sport at the end of last year after he failed to land a top drive.

Hamilton denied Max Verstappen a third win in four races at Hungaroring, but the Dutchman’s Red Bull teammate Pierre Gasly is under increasing pressure for his below-par-performances.

Gasly is 118 points adrift of Verstappen in the standings, and finished a lap down at the Hungaroring, prompting Red Bull team principal Christian Horner to say he “desperately” needs to improve.

Alonso, who tweeted to praise both Hamilton and Verstappen on their fight for victory on Sunday, remains under contract with McLaren.

But the Zak Brown-led outfit have confirmed their line-up for 2020, and they will not stand in Alonso’s way, effectively making him a free agent.

The Spaniard failed to qualify for the Indy 500 earlier this year but he did go on to win his second Le Mans 24-Hours and added the 2018/2019 World Endurance Championship (WEC) title to his CV.

Verstappen and Sebastian Vettel were developed through the ranks at Red Bull but there is no driver on their junior programme who the team feel is ready for a promotion. Clearly, they believe Toro Rosso drivers Daniil Kvyat and Alex Albon are not yet ready to step up to partner Max Verstappen.

In July, Red Bull chief Helmut Marko revealed that Alonso’s poor relationship with Honda – following his public criticism of the Japanese manufacturer during their partnership with McLaren – will scupper his chances.

“Alonso’s representatives have let us know that he is available but for Honda, Alonso is something impossible,” explained Marko at the time.

“We should start a petition to get Alonso in that second Mercedes car,” said Rosberg. “Let’s bring him out of retirement and put him in the damn Mercedes next to Lewis. How cool would that be?”

Hamilton starts his summer break with a comfortable 62-point cushion in the championship following his best-ever start to a season. His drive to victory at the Hungaroring was his eighth from 12 rounds this year.

Following his victory, the Englishman said he was still not fully fit after his recent illness and intended to rest up over the next four weeks before the Belgian Grand Prix on September 1.

“In the past, I have gone into this break and I was 100 per cent fit so I could go and party for multiple days,” he said. “But I am not in that place at the moment.

“I might try meditation and a healthier lifestyle. My close friends around me will be doing the same. I’ll be doing a lot more reading. I’m excited about it. I want the second half of the season to be stronger than the first,” added Hamilton.