Hamilton: The team had relaxed faith that we would do it 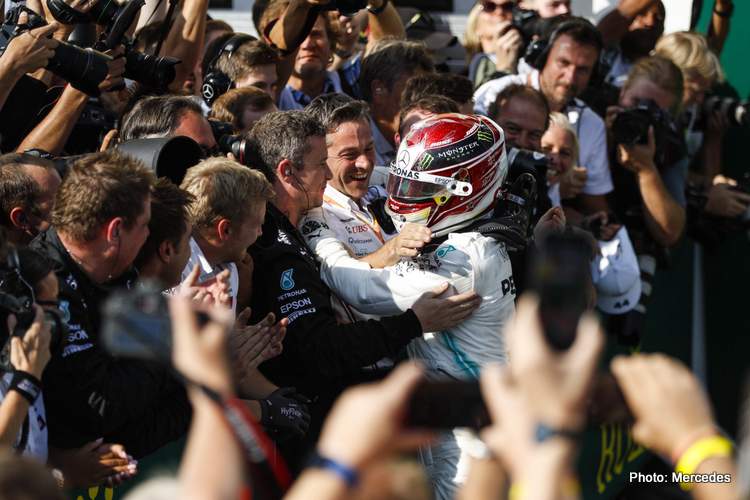 Lewis Hamilton hailed his Hungarian Grand Prix victory as ‘the ultimate testament of teamwork’ on Sunday after reeling in Red Bull rival Max Verstappen with a superb combination of speed and strategy.

Starting third on the grid, Hamilton swiftly passed Mercedes teammate Valtteri Bottas and then it was game on as the five-times world champion and the heir apparent set about their own private duel.

Verstappen made a clean getaway from pole position and it took Hamilton all but the last four of the 70 laps to catch and pass the 21-year-old Dutchman.

Mercedes got the strategy spot on, despite the Briton’s reservations.

He had been told it was ‘Hammer Time’ when Verstappen made his first pitstop but despite then going wheel-to-wheel with the Red Bull after his own subsequent stop, could not make a move stick.

So Mercedes switched their approach, taking a gamble on two stops and calling Hamilton in for medium tyres with 22 laps remaining and Verstappen on hards.

He rejoined the track with a deficit of nearly 20 seconds to make up and initially told the team over the radio: “I don’t know if that was the right call, man.”

“We’ve got clear air until the end of the race. I know you can do this, mate; fastest man out there,” his race engineer assured him.

Then, on lap 64 and with the gap at 5.5 seconds, and the Red Bull almost in Hamilton’s sights, Verstappen took to his radio and informed his team: “The tyres are dead.”

The possible suddenly seemed inevitable and there was only a second in it by lap 66. A lap later and the champion was in front, Verstappen unable to offer much resistance down the straight.

“I think with four or five laps to go, I had him four seconds ahead and I could see him in my sights, so maybe he’s struggling with his tyres. So after that I was like ‘OK, we’ve got a serious race on here’,” said Hamilton.

“It felt like the steepest wall to climb when you come out that far behind, but the team had relaxed faith that we would do it and I’m grateful for their hard work and the decision.”

The strategy was right but neither Hamilton nor the team had total faith in it. What they did have was trust and a driver who made it work.

“They’re very, very calm when they talk about the strategy like that today,” said Hamilton, who has now won eight of 12 races and goes into the August break with a massive 62 point lead over Bottas.

“(They said) ‘No, no, truly believed you could do it.’ For sure they were nervous as hell that it wasn’t going to work. I think collectively we made it happen,” added Hamilton.