Hamilton: Beating great Verstappen at his best is awesome 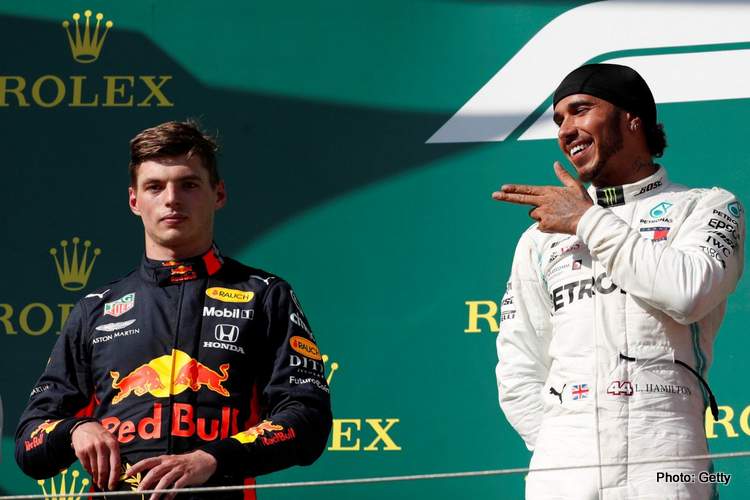 The intense battle for victory at the Hungarian Grand Prix, on Sunday, epitomised the Old Guard versus the New Guard, the King versus the Prince, Downforce versus Power, Cat versus Mouse, in the end, Lewis Hamilton outgunned Max Verstappen in an enthralling contest with the prospect of many more to come.

In the past, Hamilton admitted that during this era, of Mercedes dominance, F1 has been boring at times. But on Sunday he needed no excuses as we were treated to the five-time World Champion in all his majesty as he hunted down the #33 Red Bull for victory.

He put his head down, grumbled a little but then took advantage of an inspired strategy call to deliver a monumental drive – one of his best – and with it extend his championship lead to 62-points.

At the same time, Verstappen never put a foot wrong as he gave it all he had but eventually the tyres on the RB15 cried enough when it mattered and all the Mouse could do is watch the Cat take the honours yet again. But it was rivetingly close.

But it was a riveting contest between the two best drivers in F1 at the moment, lapping their respective teammates by the end of the race testament to their superiority.

It was clear after the race that Hamilton’s 81st victory in the top flight was a special one, “Obviously there is really no better feeling from a racing drivers’ point of view.

“When you have a race like [that] and you face a really strong competitor and a great driver like Max, who is obviously at his best and continuing to perform great, it’s really comforting. It’s awesome. I really am happy.”

“You want to be proud of yourself and I feel really proud of myself today, how I drove because that’s how I always want to drive, and how we delivered as a team. I’m 34 years old but I feel like I’m driving better than ever.”

Verstappen, at 21, is the shooting star of F1 and he continues to raise his game with every race. He has emerged as the man most likely to challenge the might of Mercedes and their star driver, exactly what this season needs ahead of the second stanza after the summer break.

Not long ago the young Dutchman went through an accident-prone phase, but he reeled in his waywardness, matured rapidly and has emerged as the real deal, the most talked-about driver in the sport right now.

But arguably the greatest maturity and discipline Verstappen has shown is the ability to race wheel-to-wheel with his rivals without incident and tears. Everything in his armoury is well under control at the moment. His survival instinct, as well as his on-track tactics, are aspects of his game that are now well and truly honed,

Hamilton acknowledged as much, “It’s awesome to see firstly the respect level between us, it was really respectful driving out there. As soon as I got into second I was like OK, this whole battle they’ve been talking about me and Max having, we’re going to have that today.

“He put the car in some good places, I gave him space and more today but that’s mainly from a mindset, if we were fighting on the same points it may have been a lot more aggressive.

“But there was no need for that today and it was really just making sure that when we do finally pull off an overtaking manoeuvre that was clean,” explained the Mercedes driver.

Credit to Hamilton for always relishing the prospect of a proper battle with the opposition, “All of a sudden we’ve had this big step up from Red Bull. Now we’ve got a really good battle on our hands and it looks like it’s here to stay.”