Toro Rosso: Fantastic to see Daniil and Alex race each other 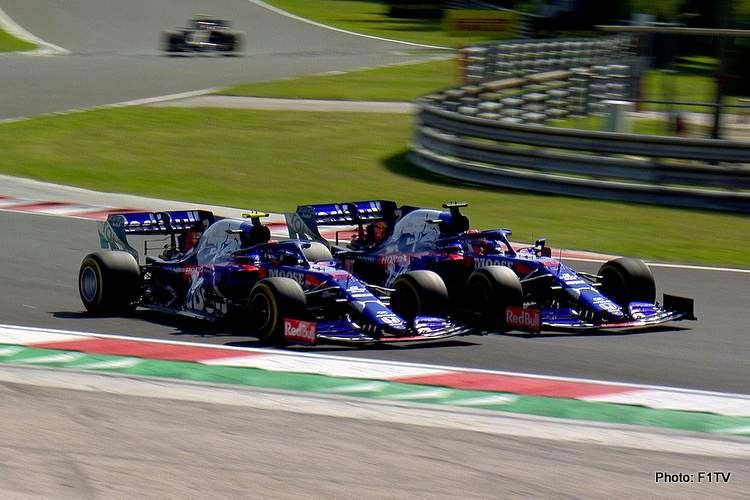 Toro Rosso report from the Hungarian Grand Prix, Round 12 of the 2019 Formula 1 World Championship, at Hungaroring near Budapest.

P10. Alexander Albon: “I had quite a good race today. My first stint was average, and I didn’t feel very comfortable with the Medium tyres, it felt like I had almost no grip at all, but once I went onto the Hard tyres the car came alive again. I had two nice fights with Dany, the first one was much closer than the second one! It was good fun and it was fair racing. I think P10 was the best we could achieve today, so we have to be pleased. Now I’ve got time to relax a bit, review the season so far and understand where I need to improve to be ready for the second half of the year.”

P15. Daniil Kvyat: “It was an interesting race and I think it could have been a good day, but unfortunately, we pitted too early and my tyres hit the cliff with around 15 laps to go. Once you hit the cliff it’s game over, so the strategy didn’t work out for us today. It was a nice battle with Alex when we were both on the same tyres, I managed to overtake him and it was very good fun, but after that in the last few laps when my tyres were completely gone it wasn’t enjoyable anymore. Having said that, I’m quite happy with the way I drove and I got everything I could out of the car. It’s just a shame we weren’t able to bring home the points.”

Jonathan Eddolls, Chief Race Engineer: “We had quite an eventful race today with the team managing to score a point, which we are happy with. We think this was the maximum possible given where we started. Both drivers lost some positions during the first lap which made our life more difficult, although a train quickly formed up behind Grosjean. Overtaking is tough here, especially when the cars are in a DRS train, so we decided to pit Daniil earlier in the race trying to undercut those cars ahead and stay in front of the Haas, who had pitted two laps before.

“Unfortunately, we had a slow pitstop and we came out just behind. Daniil was soon able to overtake but then he spent the rest of the race behind Perez, finding it impossible to pass him. He was managing the tyres for a part of the stint but, after trying to attack Perez for P10 at the end, they simply ran out of life. We stayed out longer with Alex in the first stint to try to cover all eventualities and, although he came out behind Daniil after his stop, his fresher tyres allowed him to attack towards the end and pass Perez for P10.

“We head into the summer break maintaining our 5th position in the Championship, which is a great achievement for the team. I want to thank the whole team in Faenza, Bicester, Honda and the drivers for their dedication and hard work in the first half of the season – enjoy the two weeks break to find new energy and come back after the shutdown ready to continue the fight!”

Franz Tost, Team Principal: “Today we had another very exciting Formula 1 race in front of a big crowd with so many fans who came to Budapest, which shows how much interest the fans have for Formula 1. We didn’t show very good pace from the beginning of the weekend onwards, so we started the race from P12 and P13.

“However, during the race our performance was quite good, but we probably called Daniil in for the pit stop a bit too early and, as a consequence, in the final few laps he suffered with his tyres like a few other drivers around him. Despite this, he still drove a very good race. As for Alex, we called him in seven laps later than Daniil and this helped him to attack at the end of the race, which allowed him to overtake Perez and score a point.

“It was fantastic to see how Daniil and Alex raced each other – we didn’t want to give any order from the pit wall and we decided to let them race – this is what people want to see from the grandstands and on TV. They fought each other fairly and it was good racing. I think this was the maximum result we could achieve today, so we have to work very hard to close the gap to our direct competitors and I think we will achieve this in the second half of the season.

“Thanks to the whole team, the complete working group, for the big effort they put in the first half of the year. Now we will have two weeks of holidays to come back with fully charged batteries for the rest of the season.”