Renault: We could not make our strategy really work 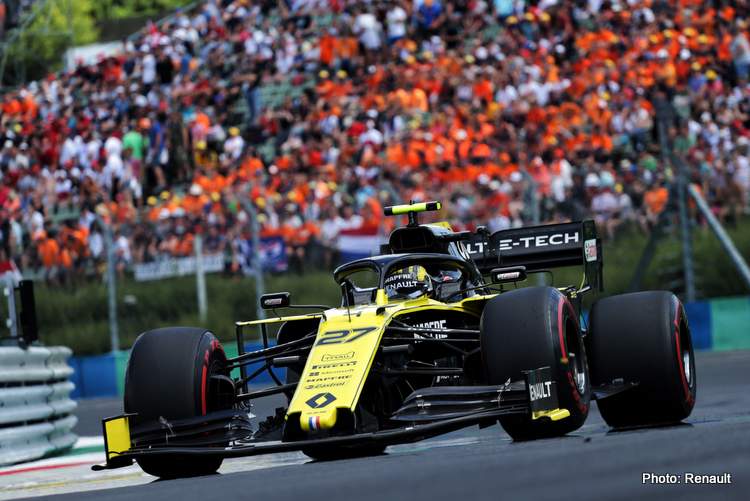 Starting from eleventh on the grid, Nico progressed into the top ten in the first part of the race through a long opening stint on the Pirelli Medium tyres. Despite suffering from power loss, he kept a train of cars behind him until his sole pit stop on lap 36. Re-joining in P15, he progressed back to his eventual finish.

Daniel started from the rear of the grid on Pirelli Hard rubber following a strategic change of Power Unit elements. On a track that is notorious for its difficulty to overtake Daniel moved through the field with ease and was challenging the top 10 before his pit stop on lap 46. He made several bold moves in the closing stages of the race to claim fourteenth.

P11. Nico Hülkenberg: “It was a difficult afternoon for us today. We struggled with the car, with an engine control issue from the beginning of the race, which meant I lost consistently three tenths a lap. That made things tricky and we just didn’t have the pace to progress into the points. It’s a good time for a break. As a team we will regroup, think a few things over because we need to up our game in the second part of the season.”

P14. Daniel Ricciardo: “It was always going to be tough starting at the back of the grid, but there were some positive moments. We made the Hard tyres last well and then had good pace on the Soft tyre towards the end. It was frustrating not to get past Magnussen. I felt he was moving under braking, and I couldn’t do anything.

“I wasn’t happy about that as we could have progressed even further at the end. There are some positives and the summer break will be good for us. We’ll reset, take some time off, we know we’re in it together and we’ll be targeting a better second-half of the season.”

Cyril Abiteboul, Team Principal: “A poor result today with both cars outside of the top 10. With Nico we were targeting points, but with an engine having to run in safe mode and a very modest advantage over the Soft tyre starters, we could not make our strategy really work.

“Daniel ran a good race, but starting last is always going to be a challenge at a track like Budapest. He still managed to gain several positions and had a good fight with Magnussen until the last corner, showing that he is a fighter who does not surrender. His attitude on track must be an inspiration for us as we head towards the summer break, with a first half of the season well below our objectives.”