McLaren: Very hard work over last month is paying off 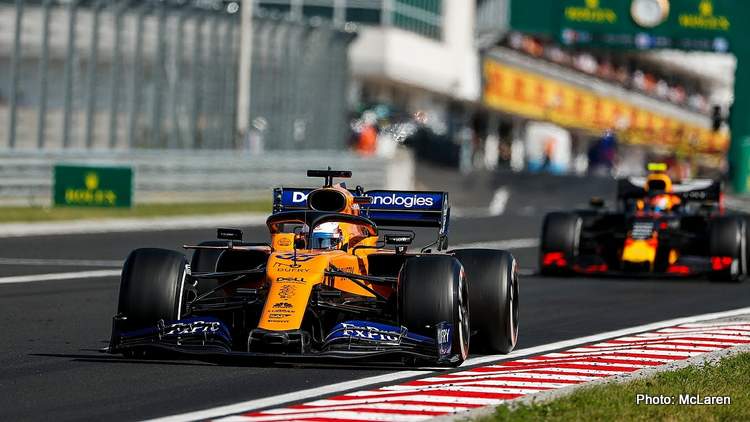 McLaren report from the Hungarian Grand Prix, Round 12 of the 2019 Formula 1 World Championship, at Hungaroring near Budapest.

P5. Carlos Sainz: “Yes! This time, P5 tastes much better than the P5 of seven days ago. We executed the race perfectly. We had a great start, great pace and, in a fairly normal race, we managed to score a top-five finish. Holding Gasly behind in the second stint was intense, but I controlled the pace to counter-attack any opportunity he had to get closer and managed to finish ahead of a Red Bull on pure pace.

“I really want to thank and congratulate every single member of the team, here and back at the factory. I think these first dozen races show how much progress we’ve made this season, and we now need to keep digging. The ambition is to get closer and closer.

“Everyone can be proud of how things are going and the consistency we’re achieving. To keep learning in the second half of the season is important to try to build a better car for next year and take another step. Now it’s time to recharge the batteries and come back even stronger. Thank you team, enjoy a well-deserved summer break!”

P9. Lando Norris: “A good start, where I came up to a lot of the guys ahead, which was good. I got past Gasly straight away but I knew Carlos was somewhere on the inside, so I played it safe and gave him plenty of space. With hindsight, I think I could’ve stayed ahead but I didn’t want to take the risk.

“P7 in the first stint was alright, following Carlos the whole way. Then we did our pit-stop and I think the left rear was a bit slow. We lost all of our positions there, basically. The pace was good but the Mercedes was a bit quicker at the end. Apart from that it was an alright race.”

Andreas Seidl, Team Principal: “It’s been another very strong weekend for the team. It was a very impressive drive from Carlos after a great start. He kept Gasly behind him all through the second part of the race and didn’t miss a beat to secure P5. Lando was unlucky. He was set up for a higher finish before a problem with the left-rear wheel gun cost him two positions in the pit-stop and left him exposed to Bottas at the end.

“Very hard work over the last month – both at the track and back at the MTC – is paying off. We were clearly the fourth-fastest team, and scoring another 12 vital points locks us into fourth place in the Constructors’ Championship. Every single member of the team can take heart from that going into the summer break. The next job is for everyone to recharge their batteries and come back even stronger in Spa.”