Haas: At the end it’s a difficult situation to be 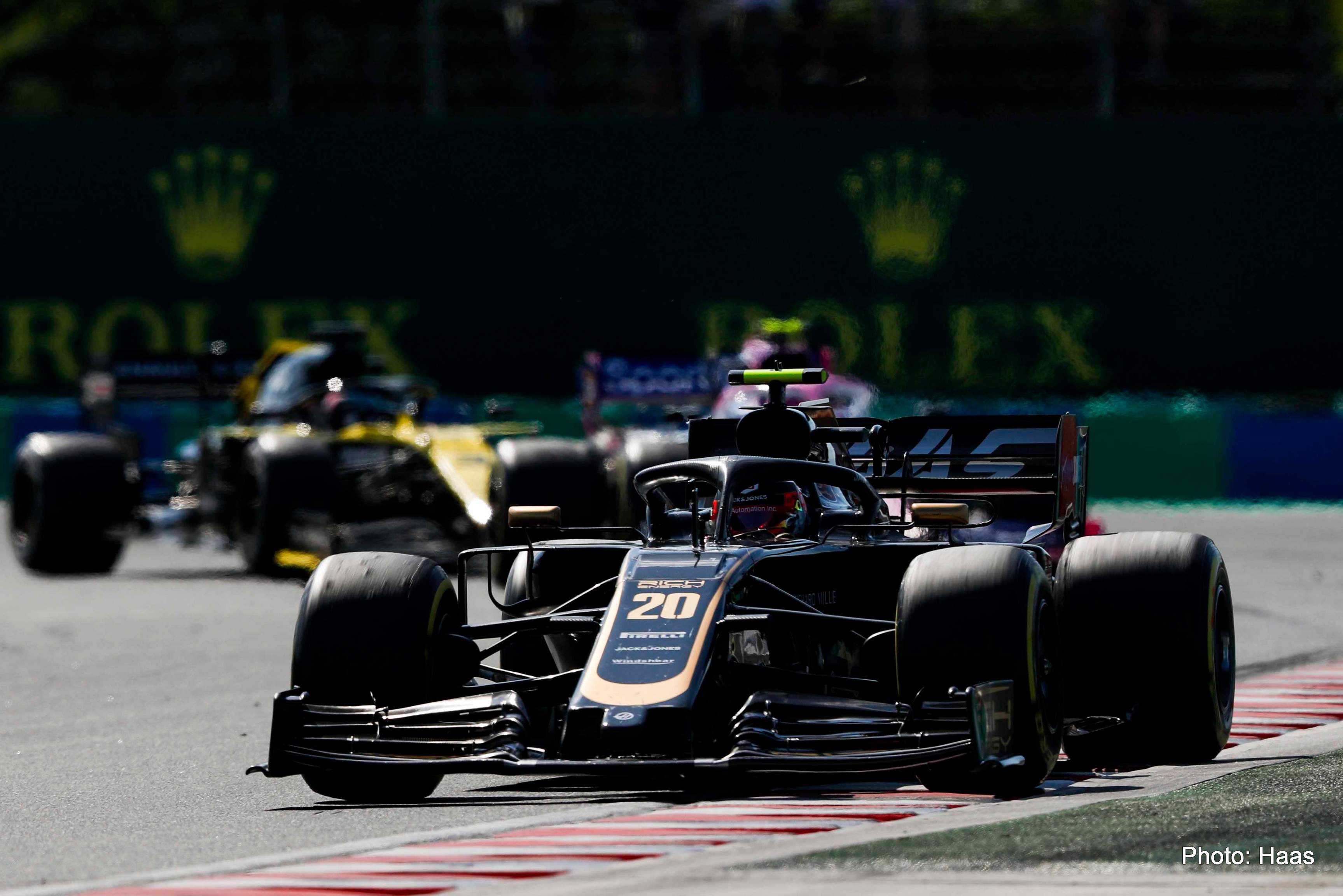 Rich Energy Haas F1 Team driver Kevin Magnussen brought home a 13th-place finish in Sunday’s Hungarian Grand Prix, the 12th round of the 2019 FIA Formula One World Championship at Hungaroring in Budapest, while teammate Romain Grosjean retired 19 laps from the finish with a water pressure issue.

Magnussen started the race from 14th on his set of Pirelli P Zero Yellow medium tires and dropped a pair of positions on the opening lap around the 4.381-kilometer (2.722-mile), 14-turn circuit. He made that set of mediums last the first 39 laps of today’s 70-lap race, climbing as high as 11th when he finally pitted for a set of Red soft tires that would carry him to the finish.

He resumed in 15th, just ahead of Grosjean, and displayed some heady driving in holding off the challenges of Renault’s Daniel Ricciardo in defending 14th place shortly thereafter. Magnussen picked up one more position before the checkered flag.

Grosjean, meanwhile, started ninth on a set of soft tires and held that relative position until pitting on lap 19 for a set of White hard rubber. He was struggling to keep pace some 20 laps later and was called into the pits after completing 49 laps. The team diagnosed the problem as a water pressure issue that could not be remedied.

With today’s results, Rich Energy Haas F1 Team sits ninth in the constructors’ championship with 26 points, five behind eighth-place Racing Point and 25 ahead of 10th-place Williams.

Nine races remain on the 2019 Formula One schedule as team embark on their annual summer break, with the next event coming in four weeks – the Belgian Grand Prix Aug. 30 to Sept. 1 at Circuit Spa-Francorchamps.

DNF. Romain Grosjean: “I was happy with the beginning of the race. The car felt okay on softs, I was holding everyone behind. That’s something we knew from the race pace and I was happy with that. Then we fitted the hard tire, which we hadn’t really run over the weekend, and I think today you didn’t want to be on the hard tire. There was no grip and it was impossible to warm them up. Ultimately we had a water pressure issue and had to retire the car anyway.”

P13. Kevin Magnussen: “The car was okay in the race today, not too bad at least, for our level. Considering the problems we’ve had this year, it was pretty quick race pace – not good race pace, but compared to ourselves in the past. I’m happy we’re headed into the summer break now, we all are in the team, everyone’s ready for the break. We’ll come back stronger.”

Guenther Steiner, Team Principal: “It was a pretty tough race for us. In the end though we showed some fight with some other midfield teams. A lot is in these tires, which makes these races so unpredictable, and weird almost. Kevin (Magnussen) put up a good fight, and unfortunately Romain (Grosjean), his tires just died on him, then we had an issue with his water pressure. At the end, it’s a difficult situation to be, in dealing with these tires and getting them to work. We will keep on trying until something changes.”