Ferrari: Lack of aero downforce was mainly to blame 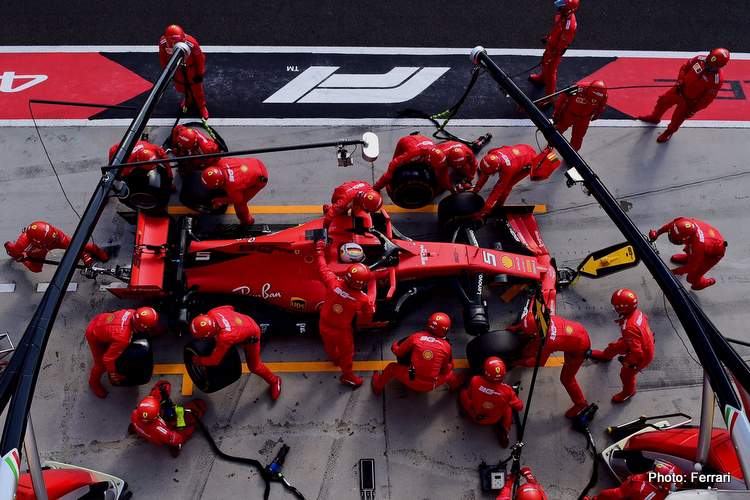 Scuderia Ferrari picked up its eleventh podium of the season thanks to a third-place finish for Sebastian Vettel in today’s Hungarian Grand Prix, held at the Hungaroring.

Start. The two SF90s got away cleanly when the lights went out and, on the short uphill straight prior to turn 4, Charles made the most of the battle between Lewis Hamilton and Valtteri Bottas to pass the Finn and move up to third. The two cars touched at this point and Sebastian also got past.

Strategy. Charles was third until lap 27, when he pitted, as his Mediums were degrading significantly at that point. He took on Hards with the aim of going all the way to the chequered flag. As for Sebastian, he managed to complete 39 laps on the Mediums and that meant, unlike his team-mate, he was able to take on Soft tyres at his one and only stop.

Overtake. From then on, the German did an excellent job of managing his tyres in the opening lap of this stint and towards the end of the race, so that he closed down a gap of almost 20 seconds to Charles. Sebastian caught up to him with four laps remaining, overtaking him next time round. This is Sebastian’s sixth podium of the year.

The championship now takes its usual summer break before the action resumes with the Belgian Grand Prix on 1st September.

P3. Sebastian Vettel: “We leave Hungary and for a few weeks we can console ourselves with the fact that we made it to the podium in a race in which we knew we were going to struggle.

“Today, we simply could not match the pace of our rivals. In terms of strategy, the idea was to come up with something different to try and do better than fourth. I managed to extend the first stint to 39 laps and that allowed me to fit Softs and have a stronger pace than Charles in the closing stages.

“Now we can recharge our batteries and prepare to battle once more in Spa and Monza, tracks where we ought to be more competitive. We know there is still some performance to come from the SF90 and we have to work on that, but I am convinced that there is a margin to get better results.”

P4. Charles Leclerc: “Arriving in Hungary we knew it would be a tough race for us, and it was. The beginning of the first stint wasn’t bad, but as the race progressed, I started to struggle with my rear tyres more and more and could not match the pace of our competitors.

“My target now is to understand how to improve this, especially over long runs and on circuits where the degradation is high. I look forward to returning to racing after the break so that we can continue working on making further improvements and give our competitors a good challenge.”

Mattia Binotto Team Principal: “We can’t take satisfaction from today’s result, when what was mainly to blame was a lack of aero downforce, which at the moment penalises us even more in the race than in qualifying. The hot conditions did not help and actually caused us more problems in terms of reduced grip levels.

“Sebastian did a good job of managing the tyres in the first stint, thus lengthening it, which meant he could fit the softs and run with them to the chequered flag. However, we have to understand why Charles’ tyres wore so much and fix for the coming races. We pitted him, as his rears were very used and there was nothing else we could do.

“From a track on which we knew we would struggle, we still head home with the same number of points of our closer rivals.

“Next week we will continue to work on analysing data and preparing for the next two races in Spa and Monza, however, before then we have the summer break which will be good for the entire team, that has really worked so hard over the past few months.”