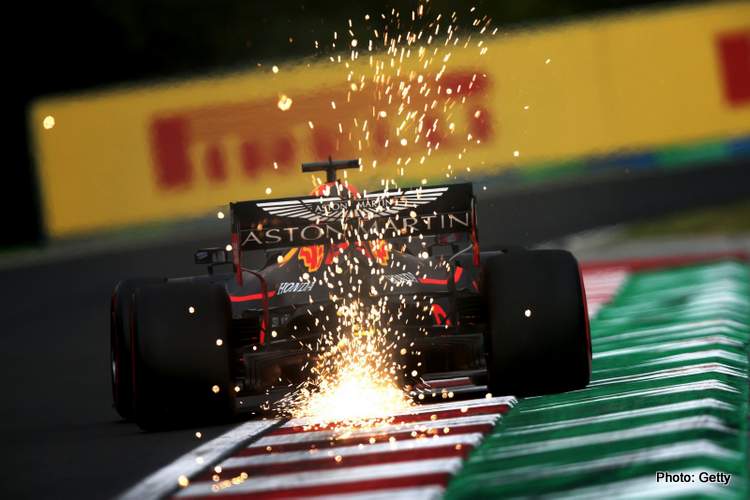 Max Verstappen will start the Hungarian Grand Prix from the front of the grid after the Dutch ace put in a superb qualifying performance to take the first pole position of his career at the Hungaroring.

Pierre will start the race from sixth place on the grid.

Lightning-quick throughout the hour-long session, Max made it through the first segment at the top of the timesheet and then shadowed Mercedes’ Lewis Hamilton, progressing to the top-10 shootout in P2 just two-hundredths of a second behind the championship leader.

When it counted, though, Max powered ahead of the chasing pack. He grabbed provisional pole with a brilliant first-run time of 1:14.958 to sit just under two tenths ahead of the second Mercedes of Valterri Bottas and then, in the final run, found a remarkable 0.386s to claim his first pole position, just 0.018s ahead of Bottas and two tenths of a seconds ahead of Hamilton.

P1. Max Verstappen: “It has been a great day and the car was hooked up straight away in Qualifying. To come out on top is incredible and my first pole position will always be a special one. It’s also nice to get pole on a great track like this as a qualifying lap on low fuel is so enjoyable.

“You can really feel the grip of the car with the full downforce and it’s a lot of fun out there. We are closing in on the front-runners all the time and Honda keep pushing hard to optimise everything. Today was another great day for everyone within the Team, but that Team also includes Honda, so a big thank you as the car has been flying.

“The hard work is paying off and it’s great to see. I haven’t done a long run this weekend but lately our car has been even better in the race, so I don’t feel too worried. We just need to try and get a clean start and get the job done.

“I also didn’t realise there were so many Dutch people in Hungary at the moment and it was amazing to see them all in the grandstands. We are all very close so tomorrow should be another exciting race.”

P6. Pierre Gasly: “I’m disappointed as I didn’t put a clean lap together and I made a few mistakes otherwise I think I could have taken the fight to Ferrari for P4 or P5. In the end we’ve qualified in P6 which is still a decent position but for sure we wanted a better lap time.

“Tomorrow we start on the medium tyre, we’ll keep pushing flat out and hopefully we can do something with the strategy and recover some positions. Also, a big congratulations to Max on pole position. It’s really deserved and great for the whole Team.

“On a tricky track like this where it’s difficult to overtake, it’s a good advantage and we have a strong car as he proved today, so there is everything to play for. In Free Practice, no one managed to do any long runs so we don’t know what the tyres are going to do over 70 laps which could also make things interesting.”

Christian Horner, Team Principal: “That was a fantastic performance by Max. I’m really pleased to see him get his first pole position and become the first Dutchman to do so. It absolutely nip-and-tuck throughout and his first run in Q3 was a brilliant lap.

“To then better it would have been tough but he managed to chip away and it all came down to the last two corners. I think Valtteri had a little bit of oversteer in Turn 13 whilst Max absolutely nailed the final two corners and two-hundredths of a second was the margin at the line.

“Max brings Honda its first pole since 2006 and the Hungaroring is an important track to have grid position so hopefully we can convert it for a good haul of points tomorrow. I think we’re really starting to get performance on the car, the teams in Milton Keynes and Sakura are doing a great job and we’ve definitely made progress in the first half of the year.

“On Pierre’s side, he made it through Q2 on the harder tyre which was our aim, but then unfortunately in Q3 he made a mistake on his fast lap. In P6, he’s right next to the Ferraris but everything is still to play for.”